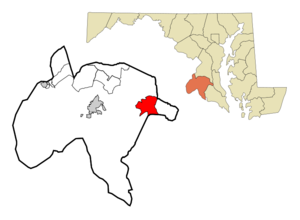 Hughesville was a market town. The former tobacco warehouses are now used for second-hand thrift stores and boutique gift and craft shops. A highway bypass around the town opened in February 2007, which has alleviated previous rush-hour traffic backups at the single traffic signal; however, aesthetic improvements to perfect the bypass are still ongoing. A few miles southeast is an community and (see article on Charlotte Hall). Because Hughesville, though small, is considered the strategic geographic center of the tri-county region, it houses institutions such as the headquarters for the , a humane society, an economic development council, a board of realtors, and a homeless shelter, which serve the tri-county area. The town has no traditional grid-layout streets, but consists of merely businesses along the highway and some very small outlying housing developments.

There were 503 households out of which 36.4% had children under the age of 18 living with them, 68.2% were married couples living together, 7.4% had a female householder with no husband present, and 18.9% were non-families. 12.7% of all households were made up of individuals and 4.6% had someone living alone who was 65 years of age or older. The average household size was 2.97 and the average family size was 3.25.

Hughesville is the home of the Hughesville All Stars the all star teams that have won the Southern Maryland regional tournament, a prequisite to the little league World Series, in at least one age group for more than five staight years. Last year the Hughesville 14-15 age group went all the way to the little league world series. It was actually supposed to be the home of the southern Maryland Blue Crabs, but they were reallocated to Waldorf, Maryland