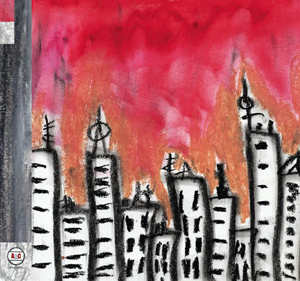 "Broken Social Scene" is the title of 's third studio album. It was released on , . The album was originally to be titled "Windsurfing Nation" [http://www.mtv.com/news/articles/1505808/20050715/broken_social_scene.jhtml]

The original artwork was to be a cartoon rendition of , which was later scrapped in favor of the current artwork drawn by lead singer Kevin Drew.

In addition to the musicians who contributed to the band's prior release "", new contributors on "Broken Social Scene" include , () and ().

The initial domestic pressings of the album were issued with a seven-track bonus EP, "EP To Be You and Me", a play on ' educational special "". The Japanese release is still issued with the EP. The vinyl pressing was released on two records, the first three sides being the album and the fourth being the EP.

The song "Ibi Dreams of Pavement (A Better Day)" refers to Canadian novelist , a friend of the band.

At the 2006 it won the award for Alternative Album of the Year. It was also shortlisted for the inaugural in 2006.

However, the album divided critics more than its predecessor, 2002's "". Whereas the earlier album had received almost universal critical praise, "Broken Social Scene"s looser, less structured songs were praised by some critics, but derided by others as self-indulgent and sloppy.