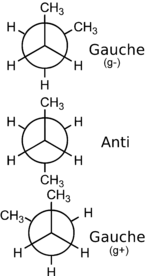 Conformers of butane, shown in Newman projection. The two gauche as well as the anti form are staggered conformations

In chemistry, conformational isomerism is a form of stereoisomerism in which the isomers can be interconverted exclusively by rotations about formally single bonds.[1] Such isomers are generally referred to as conformational isomers or conformers and specifically as rotamers[2] when the rotation leading to different conformations is restricted (hindered) rotation,in the sense that there exists a rotational energy barrier that needs to be overcome to convert one conformer to another. Conformational isomers are thus distinct from the other classes of stereoisomers for which interconversion necessarily involves breaking and reforming of chemical bonds. The rotational barrier, or barrier to rotation, is the activation energy required to interconvert rotamers.

Butane has three rotamers: two gauche conformers, which are enantiomeric and an anti conformer, where the four carbon centres are coplanar. The three eclipsed conformations with dihedral angles of 0°,120° and 240° are not considered to be rotamers, but are instead transition states.

Some important examples of conformational isomerism include: 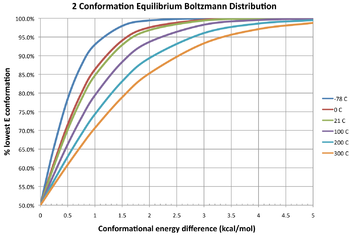 The population of different conformers follows a Boltzmann distribution:

Isolation or observation of the conformational isomers

Techniques for study of conformational isomerism

The dynamics of conformational (and other kinds of) isomerism can be monitored by NMR spectroscopy at varying temperatures. The technique applies to barriers of 8-14 kcal/mol, and species exhibiting such dynamics are often called "fluxional".

Base induced bimolecular dehydrohalogenation (an E2 type reaction mechanism). The optimum geometry for the transition state requires the breaking bonds to be antiperiplanar, as they are in the appropriate staggered conformation 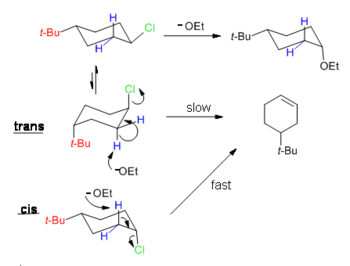 The trans isomer can attain antiperiplanarity only via the unfavored axial conformer and therefor it does not eliminate.The cis isomer is already in the correct geometry in its most stable conformation and therefor it eliminates easily.

Reaction rates are highly dependent on the conformation of the reactants. This theme is especially well elucidated in organic chemistry. One example is provided by the elimination reactions, which involve the simultaneous removal of a proton and a leaving group from vicinal positions under the influence of a base. The mechanism requires that the departing atoms or groups follow antiparallel trajectories. For open chain substrates this geometric prerequisite is met by at least one of the three staggered conformers. For some cyclic substrates, however, an antiparallel arrangement may not be attainable depending. Adjacent substituents on a cyclohexane ring can achieve antiperiplanarity only when they occupy trans diaxial positions. One consequence of this analysis is that trans-4-tert-butylcyclohexyl chloride cannot easily eliminate but instead undergoes substitution.

Side-chain dihedral angles are not evenly distributed, but for most side chain types, the χ angles occur in tight clusters around certain values. Rotamer libraries therefore are usually derived from statistical analysis of side-chain conformations in known structures of proteins by clustering observed conformations or by dividing dihedral angle space into bins, and determining an average conformation in each bin. This division is usually on physical-chemical grounds, as in the divisions for rotation about sp3-sp3 bonds into three 120° bins centered on each staggered conformation (60°, 180°, -60°).