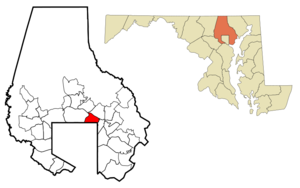 Putty Hill Avenue begins one block prior to Goucher Boulevard, and continues for approximately 4¼ miles up until Walther Boulevard. At this point, going straight would bring the motorist onto Rossville Boulevard. But a left onto Walther, followed by the next right, would bring the motorist to an older section of Putty Hill Avenue, which continues a few blocks parallel to Rossville, and after Belair Road, changes into Ridge Road. It has been written that the area known as "Putty Hill" (i.e., that area surrounding the intersection of Belair Road (U.S. Route 1) and Putty Hill Avenue) took its name from the consistency assumed by road surfaces in the area during rain storms. Fact|date=December 2007

Taylor Avenue is a two-lane cross-county road that runs from to Overlea, mostly though Parkville. The road begins as a split off near where Goucher Boulevard ends near Loch Raven Boulevard, and continues east toward its end at Belair Road.

The most western portion of Taylor Avenue is part of the route of two bus lines, routes 19 and 55. Route 55 at one time had a branch that operated across all over Taylor Avenue.

The Loch Raven branch of the is located on Taylor Avenue.