The area now known as Dundalk was first explored by John Smith in 1608, when while conducting an expedition up the Chesapeake Bay he landed on the area known as the Patapsco Neck. Up until this time, the area was occupied by the tribes of the Susquehanna Indians.

In 1664 Thomas Todd of Virginia purchased 1,150 acres (4.7 km2) of land on the Patapsco Neck, this being the first deed in Baltimore County. The original house, “Todd’s Inheritance”, was burnt by the British during the War of 1812, Battle of North Point. After the war the house was rebuilt, and it still stands today as a historical landmark.

In 1856 Henry McShane, an immigrant from Ireland, established the McShane Bell Foundry on the banks of the Patapsco River in the then far southeastern outskirts of Baltimore.[1] The foundry later relocated to the Patterson Park area of Baltimore until a fire during the 1940s caused it to move to 201 East Federal Street. In addition to bronze bells, the foundry once manufactured cast iron pipes and furnace fittings. When asked by the Baltimore and Sparrows Point Railroad for a name of a depot for the foundry, which was on their rail line, McShane wrote Dundalk, after the town of his birth Dundalk, Ireland. In 1977 the foundry moved to its current location in Glen Burnie. 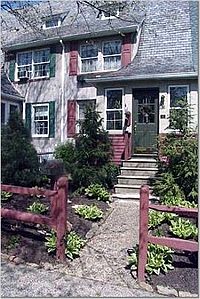 One of the original stucco houses in Old Dundalk.

In 1916 the Bethlehem Steel Company purchased 1,000 acres (4.0 km2) of farmland, near the McShane foundry, to develop housing for its shipyard workers. The Dundalk Company was formed to plan a town in the new style, similar to that of the Roland Park area of Baltimore, excluding businesses except at specific spots and leaving land for future development of schools, playing fields, and parks. By 1917 Dundalk proper was founded, by then it had 62 houses, 2 stores, a post office, and a telephone exchange. Streets were laid out in a pedestrian-friendly open grid, with monikers like "Shipway," "Northship," "Flagship," and "Admiral." The two-story houses had steeply pitched roofs and stucco exteriors.

The Dundalk Historic District was listed on the National Register of Historic Places in 1983.[2]

Most of Dundalk is flat and very near sea level, with a few small hills close to the city of Baltimore to the west. Dundalk is part of the Atlantic Coastal Plain. Elevations range from sea level on the shore of the Chesapeake Bay to approximately 40 feet (12 m) above sea level along the northern reaches of Dundalk Avenue and North Point Boulevard.

Bread and Cheese Creek is a tributary of the Back River located in Dundalk, Maryland. The creek is 8.5 miles (13.7 km) long, with headwaters in Baltimore City. It flows through Dundalk before emptying into the Back River, which flows into the Chesapeake Bay. The watershed area of the creek is 1.85 mi2 (4.8 km2).

Dundalk lies in the Humid subtropical climate zone. Summers are quite hot and humid, with frequent afternoon thunderstorms. Spring and fall bring pleasant temperatures and lower humidity. Winters range from mild to chilly by U.S. standards, with lighter rain showers of longer duration. Precipitation is evenly spread throughout the year, with each month recording between 3-4 inches of rainfall. Snow can occur in winter, but virtually always sporadic and light, with an average of 1-2 snowfalls per year, usually melting quickly. Dundalk's location along the shores of the Chesapeake Bay and low elevation give it more moderate temperatures than locations further north and inland in the metro area, with higher low temperatures and lower high temperatures than neighboring Baltimore. The greater Dundalk area lies within Plant Hardiness Zone 8. 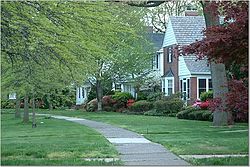 A springtime scene in Dundalk.

Some of the major roads in the Dundalk area are:

Public transportation between Sparrows Point, Dundalk and Baltimore City was operated by the United Railways and Electric Company's (later the Baltimore Transit Company) #26 streetcar line which ran down the middle of Dundalk Avenue until August 1958. Until the early 1950s, the line carried the famous "Red Rocket" streetcars which were two and three car trains of wooden trolleys. During World War II's rush hours on the line, trains operated on a 30 second headway.

Today, public transportation is provided by the Maryland Transit Administration. Three major MTA lines that serve the area are Routes 4, 10, and 20.

For primary and secondary education Dundalk is served by the Baltimore County Public Schools system, with Dundalk High School, Patapsco High School, and Sparrows Point High School being the major high schools to serve the area.

In addition, Dundalk is home to Sollers Point Technical High School, one of the only high schools in the country to hold a ISO 9001 certification.

Natives and residents of note