Crispian Mills (born 18 January 1973 as Crispian John David Boulting) is an English singer, songwriter, and guitarist. He is the son of actress Hayley Mills and director Roy Boulting, the grandson of John Mills and Mary Hayley Bell (Lady Mills), nephew of Juliet Mills and Jonathan Mills, and half-brother to Jason "Ace" Lawson. He has been married to the model Joanne Mills (née Branfoot) since 1995. They currently reside in Bath with their son, Keshava.[1]

Active since 1988, Mills is best known as the frontman of the psychedelic indie rock band Kula Shaker. Following the band's breakup in 1999, he remained with Columbia Records (a subsidiary of Sony BMG), and toured with a set of session musicians (including a support slot for Robbie Williams) under the name Pi, although no official studio recordings were released in full. After the label rejected the Pi album, Mills disappeared for a short time, returning in 2002 as frontman and lead guitarist of back-to-basics rock outfit The Jeevas, who disbanded in 2005 to make way for a reformed Kula Shaker, who released their third album Strangefolk in 2007.

Mills' vocal style reflects his influences, demonstrating the soft, melodic qualities of 1960s pop, a more scratchy, textured folk leaning in the style of Bob Dylan, held together by a heavier, late-1970s rock-esque howling delivery. His lyrics are similarly varied, and demonstrate themes such as love, wisdom, and mysticism alongside political commentary, social observations and popular culture. As a guitarist, Mills is self-taught, and has observed that his "style is all about [his] right hand," as seen through his penchant for the slide guitar technique. He is also a frequent user of the wah-wah pedal and is also known to play the harmonica and the sarod.

Crispian Mills was born in Hammersmith, London, England on 18 January 1973. His mother, Hayley Mills had made her name as a child star in the 1960s, and met Crispian’s father, Roy Boulting, on the set of light British comedy The Family Way. At the time, Boulting was still married to his third wife Sandra. Boulting was 33 years Mills' senior, and only five years younger than her father, Sir John Mills. The pair went on to marry in 1971. The family lived on Belgrade Road, in the south-west London district of Hampton,[2] and had an additional seat at Cobstone Windmill at Ibstone, Buckinghamshire. The marriage did not last, and the pair split in 1975, followed by an official divorce in 1977. At this point, Hayley was pregnant again by actor Leigh Lawson with her second son, Jason. Crispian did not see his father again until he was 16.[2] Boulting has since explained why that was[3]:

The new family split their time between Hampton and Lawson's Coventry residence.[4] Hayley had given up working to raise her sons during their early years, a sacrifice which to this day, Crispian values very highly.[5] Crispian's maternal grandparents also played a vital role in their upbringing, particularly his grandfather John Mills, who Crispian describes as having been "the one consistent man in my life."[2] Indeed, the young Mills believed his grandfather to be a genuine knight in shining armour[6] Sir John can also be credited with introducing Crispian to music, by singing old cowboy songs to send him to sleep as a child. Crispian would go on to cover one of those songs, "Rio Grande" with his post-Kula Shaker band The Jeevas.[7] "I count myself to be very fortunate," says Mills, "in having been brought up by people who are very open-minded and who are genuinely in love with the arts. If I've inherited anything from my family, it's that love of the creative process and that awareness of the privilege which being a part of it represents. That comes from my father too...I couldn't escape from it, and never felt I wanted to."[8]

Crispian commenced his education at the Mall School, Twickenham then Highgate School in north London. His background meant that family friends were people like Richard Attenborough and Sir Laurence Olivier, although Crispian has often remarked that he was rarely star-struck as they were "just people," to one accustomed to the company of famous actors.[9] As a result of this, and his mother's experiences as a child actress, the young Mills believed that making films was to be his next step. "I grew up with pictures of my mum looking very very young, standing with John Wayne or Walt Disney. That did something to my head, I thought that was kind of normal. That's what happens, you get to twelve, you start making movies. It was only when I got to twelve that I realised, obviously, that wasn't the case.[10] Instead, he was sent to Stowe School (Chatham House, with school number 606), Buckinghamshire, to continue his education. Despite enjoying the experience initially, he left after a year (Possibly due to homesickness since he would frequently be found crying in Addington dormitary by the Matron Mrs Adcock), telling his mother, "I'm out. If you make me stay there any longer, I'm gonna become a communist!"[5] His opinions on public school have mellowed over the years, and he concedes that "public school people aren't all monsters," and blames any monstrous tendencies on the trend that allows older pupils to discipline the younger ones.[5] Hayley took the plea of her eldest son seriously, and he was promptly enrolled at the local comprehensive.

It was around this time when Mills first started to consider ideas of spirituality, and mortality. "If I ever had a Road-to-Damascus, it was when I was 11," he recalls. "I woke up one night, at home in bed, and realised I was going to die. I don't mean 'tomorrow' or 'in a year'. It wasn't a prediction. It was just suddenly understanding fully that death would come. I remember talking about it at the time. Everyone thought there was something wrong with me."[5] To address these new feelings on life and death, Crispian borrowed the Mahābhārata, one of the two major Sanskrit epics of ancient India, from his mother, and took to reading it. He also became vegetarian, although concedes that this was largely due to meeting "a really attractive girl who was vegetarian."[5] Subsequently, Mills has had involvement with the International Society for Krishna Consciousness (the "Hare Krishna" movement).[11]

Throughout his youth, Crispian had been exposed to a wide variety of music. One of his earliest musical memories was "Puff, the Magic Dragon" by Peter, Paul and Mary, which he believes "summed up [his] childhood."[12] As a general rule, Mills was uninspired by the then-current music scene, and found that he was able to identify with older records, which he felt had honesty and genuine youth.[13] However, there were a couple of exceptions to this rule: he distinguished "Stand and Deliver" by Adam and the Ants - the first single he ever bought[14] - by virtue of its drama and longevity. In terms of albums, his first purchase was "Too Tough to Die" by Ramones.[14] However, it was hearing "You Really Got Me" by English rock group The Kinks that inspired him to become a guitarist. "It was like walking into a temple, a moment when my life changed," he says. "I'd grown up listening to Boy George and Duran Duran on the radio. But You Really Got Me. Chung! This is your destiny! After that, as soon as I picked up a guitar, all I wanted to do was become brilliant. I practised, I studied tapes, I was a guitar worshipper. "Through the guitar, Mills also discovered Deep Purple, and has cited their lead guitarist Ritchie Blackmore as a major influence on his style.[5]

As he grew older, Mills started to delve deeper into psychedelic music, and spent most of his A-Level years taking LSD and listening to The Doors.[15] Acid gave the teenaged Mills a change of perspective, but he soon realised that drugs alone would not bring him the enlightenment he sought. Watching close friends go "over the edge" on hallucinogenic drugs ultimately convinced Crispian that there were other ways of changing one's perspective.[16]

Crispian Mills in an interview with a leery New York journalist stated, "You can sing about things like premature teenage sex, or you can sing about everlasting, universal truth." In the perspective of this Hindu philosophy his band debuted the song Govinda at an outdoor festival in England. "We found our way onto the Hare Krishna stage, and we just started jamming on 'Govinda'." Shortly thereafter, Crispian toured India for the first time with his mystical friend and tour guide, Mathura, while the other band members stayed behind in England.[17] He was initiated in Gaudiya Vaishnavism tradition in 1997 and has a spiritual Hare Krishna name Krishna Kantha dasa. The same year he wrote a foreword to a book by Bhaktivinoda Thakur translated into English from Bengali and titled Sri Siksastaka, an esoteric bhakti publication.[18]

Mills became famous in the UK as the lead singer/songwriter in the Indian-influenced 90s Indie/rock band Kula Shaker in 1996. Kula Shaker's first album K became the best-selling debut album since Oasis' Definitely Maybe in the UK, and the band had a string of UK hit singles, culminating in 1997's 'Hush' which peaked at #2 there. He was one of a clutch of mid-1990s Britpop stars to rise to prominence in the media, before making a series of remarks about swastikas and being accused by newspapers such as The Independent of harbouring Nazi sympathies. He later clarified that this was not what he had meant by the remarks about swastikas.

In 1997, Mills contributed vocals to the nine-minute song 'Narayan' on The Prodigy's third album The Fat of the Land. The album's success introduced Mills' work to a new group of music fans.

Following Kula Shaker's breakup in 1999, he spent two years experimenting with new musical ideas, touring briefly in the UK with as part of a band called Pi. A disagreement over the quality of an album proposed for release saw Mills depart from his UK record company in 2001. 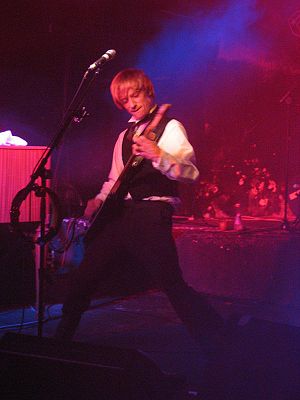 Mills performing with Kula Shaker in Milan in 2007.

In early 2002 the speedy formation of a new band called The Jeevas with Andy Nixon and Dan McKinna (previously both of the band Straw) led to relative success, with the first album selling over 100,000 copies in Japan. Sales elsewhere were low but the band remained a hot ticket in smaller UK venues. Despite extensive touring and sizeable hardcore fanbase, The Jeevas split in early 2005, with Dan and Andy forming a new band named The Magic Bullet Band.

During 2004 The Jeevas and a reformed Kula Shaker (without original keyboardist Jay Darlington) contributed to a charity album with the Californian School of Braja which Crispian masterminded. The sessions with Kula Shaker went so well that the band decided to reform permanently. 2006 saw their return to the live scene in the UK with the addition of new keyboardist Harry Broadbent, and the release of an EP The Revenge of the King. Their third album Strangefolk was released in 2007 and their fourth, Pilgrims Progress, in 2010.

Crispian is currently working on a film project entitled The Winged Boy, produced by Stephen Fry, and is also contributing to the soundtrack. As of 2009, Crispian was no longer involved in the production of the film.

In June 2010 Mills released his 4th Album with Kula Shaker, Pilgrims Progress. Mills is slated to direct A Fantastic Fear of Everything an upcoming film starring Simon Pegg. It has been described as a low-budget British "semicomedy" about a writer who becomes obsessed with murder and murdering.[19]