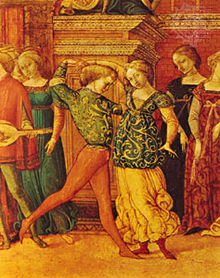 The galliard (gaillarde in French; gagliarda in Italian) was a form of Renaissance dance and music popular all over Europe in the 16th century. It is mentioned in dance manuals from England, France, Spain, Germany and Italy, among others.

As a dance, the galliard was definitely not one to be improvised. It had dancers combining patterns of steps which occupy one or more measures of music. In one measure, a galliard typically has five steps; in French such a basic step is called a cinq pas and in Italy, "cinque passi". This is sometimes written in English sources as sinkapace. These steps are: right, left, right, left, cadence.

The galliard is an athletic dance, characterised by leaps, jumps, hops and other similar figures. The main feature that defines a galliard step is the last two beats consist of a large jump, landing with one leg ahead of the other. This jump is called a cadence, and the final landing is called the posture. The sources generally describe movement patterns starting on the left foot, then repeating it starting with the right foot. A galliard pattern may also last twice as long, or more, which would involve 11 steps, or 17 steps.

The galliard was a favourite dance of Queen Elizabeth I of England, and although it is a relatively vigorous dance, in 1589 when the Queen was aged in her mid fifties, John Stanhope of the Privy Chamber reported, "the Queen is so well as I assure you, six or seven galliards in a morning, besides music and singing, is her ordinary exercise."[2]

While most commonly being an entire dance, the galliard's steps are used within many other forms of dance. For example, 16th century Italian dances in Fabritio Caroso's (1581) and Cesare Negri's (1602) dance manuals often have a galliard section.

One special step used during a galliard is lavolta, a step which involves an intimate, close hold between a couple, with the woman being lifted into the air and the couple turning 270 degrees, within one six-beat measure. Lavolta was considered by some dancing masters as an inappropriate dance.

Another special step used during a galliard is the tassel kick (Salti del Fiocco). These steps are found in Negri's manual and involve a galliard step ending with a 180 degree or 360 degree spin, during which the dancer kicks out to kick a tassel suspended between knee and waist height.

Musical compositions in the galliard form appear to have been written and performed after the dance fell out of popular use. In musical compositions, the galliard often filled the role of an after dance written in 6, which followed and mimicked another piece (sometimes a pavane) written in 4. The distinctive 6 beats to the phrase can still be heard today in songs such as "God Save the Queen".