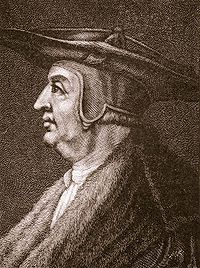 Conrad Peutinger in a Renaissance engraving.

Conrad Peutinger (October 14, 1465 – December 28, 1547) was a German humanist diplomat, politician, and economist, who was educated at Bologna and Padua. Known as a notorious antiquarian, he collected, with the help of Marcus Welser and his wife Margareta Welser, one of the largest private libraries north of the Alps.

Peutinger was born at Augsburg. He studied law at Padua.[1] In 1497 he was town clerk (Stadtschreiber) of Augsburg, which he represented in several diets, notably that of Worms in 1521. He was on intimate terms with the Emperor Maximilian.

Peutinger was one of the first to publish Roman inscriptions (Inscriptiones Romanæ, 1520). This work has been cited as the most notable of his writings on classical antiquities.[1]

Peutinger's name is associated with the famous Tabula Peutingeriana, a map of the military roads of the world known to the ancient Romans, which was discovered by Konrad Celtes, who handed it over to Peutinger for publication. The map was published in 1591 by the Antwerp-based publishing house of Johannes Moretus. It was first published as a whole by F. de Scheyb in 1753.

Peutinger also first printed the Getica of Jordanes[2] and the Historia Langobardorum of Paulus Diaconus.