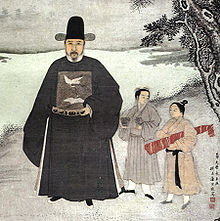 A Ming Dynasty portrait of the Chinese official Jiang Shunfu (1453–1504). The Mandarin Square indicates that he was a civil official of the first rank. 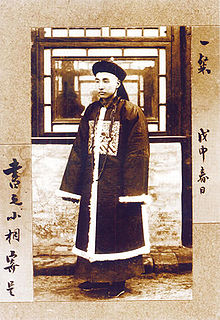 A Qing Dynasty photograph of a government official with Mandarin Square in the front.

A mandarin (Chinese: 官; pinyin: guān; Cantonese Yale: gun1; Vietnamese: quan) was a bureaucrat in imperial China, and also in the monarchist days of Vietnam where the system of Imperial examinations and scholar-bureaucrats was adopted under Chinese influence.

History and use of the term

The English term comes from the Portuguese mandarim (early spelling, mandarin). The Portuguese word is amply attested already in one of the earliest Portuguese reports about China: letters from the imprisoned survivors of the Tomé Pires' embassy, which were most likely written in 1524, [1] and in Castanheda's História do descobrimento e conquista da Índia pelos portugueses[2] Its usage among the Portuguese is also attested by Matteo Ricci, who entered the mainland China from the Portuguese Macau in the late 16th century.[3]

The Portuguese word was thought by many to be related to mandador ("one who commands") and mandar ("to command"), from Latin "mandare".[4] Modern dictionaries, however, agree that it was in fact borrowed by Portuguese from the Malay [ˈməntəri], which ultimately came from the Sanskrit mantrin (Devanagari: मंत्री) (meaning counselor or minister – etymologically linked to "Mantra").[5][6][7] According to Malaysian Royal Professor Ungku Abdul Aziz, the term had its origin when the Portuguese living in Malacca during the Malacca Sultanate wanted to meet with the higher officials in China, and used the term "menteri", but with an added "n" due to their poor grasp of the language, to refer to higher officials.[8]

In the 16th century, before the term mandarin became widespread in the European languages, the word Loutea (with various spelling variations) was often used in Europeans' travel reports to refer to Chinese scholar-officials. It is frequently used e.g. in Galeote Pereira's account of his experiences in China in 1548–1553, which was published in Europe in 1565, or (as Louthia) in Gaspar da Cruz' Treatise of China (1569). As C.R. Boxer explains, the word comes from the Chinese 老爷 (Mandarin Pinyin: lǎoye; Amoy dialect: ló-tia; Quanzhou dialect: lāu-tia), which was commonly used by people in China to address officials.[9] This is also the main term used to refer to the scholar-officials in Juan González de Mendoza's History of the great and mighty kingdom of China and the situation thereof (1585), which heavily drew (directly or indirectly) on Pereira's report and Gaspar da Cruz' book, and which was the Europeans' standard reference on China in the late 16th century.[10]

In the West, the term mandarin is associated with the concept of the scholar-official, who immersed himself in poetry, literature, and Confucian learning in addition to performing civil service duties.

The term "Mandarin" is also used to refer to the standard northern spoken variety of Chinese because it was the language used among officials during the Ming and Qing dynasties. It can be thought as the translation of the Chinese name Guanhua ("the language of the officials") for this speech standard, which was current already in the Ming Dynasty.[11]

For around 1300 years, from 605 to 1905, mandarins were selected by merit through the extremely rigorous imperial examination.

China has had civil servants since at least the Zhou Dynasty. However most high ranking positions were filled by relatives of the sovereign and the nobility. It was not until the Tang Dynasty when the final form of the mandarin was completed with the replacement of the nine-rank system. The mandarins were the founders and core of the Chinese gentry. The mandarins were replaced with a modern civil service after the fall of the Qing Dynasty.

Vietnam, after becoming free of Chinese rule and setting up its own independent monarchy, emulated the Chinese system of mandarins in its civil service.

In modern English, mandarin is also used to refer to any (though usually a senior) civil servant, often in a satirical context,[12] and particularly in the United Kingdom and Commonwealth countries.