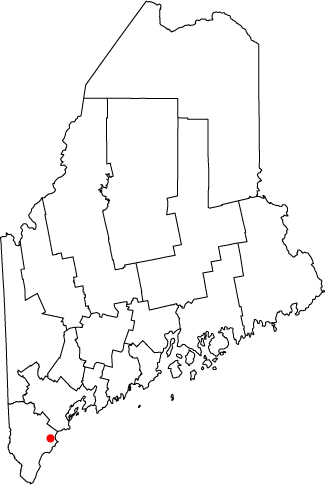 Biddeford is a city in York County, , . It is the largest city in the county, and is the 6th largest in the State. It is the most southerly incorporated city in the State of Maine, and the principal commercial center of York County. The estimated population for 2004, as given by the U.S. Census Bureau, was 22,072. Biddeford includes the resort community of . The city is home to the University of New England and the annual La Kermesse Franco-Americaine Festival.

Biddeford is a principal city of the Portland-South Portland-Biddeford Metropolitan Statistical Area.

The Sokokis tribe of Indians once hunted and fished in the area. The first European to reside here was physician Richard Vine in the winter of 1616-1617 at Winter Harbor, as he called . In 1630, the granted the land south of the River Swanckadocke (as the was then known) to Dr. Vines and John Oldham. In 1653, the town included both sides of the river, and was incorporated by the as Saco.

Roger Spencer was granted the right in 1653 to build the first . and became the community's chief exports. In 1659, Major William Phillips of Boston became a proprietor, and constructed a and mill at the falls. During in 1675, the town was attacked by Indians. Settlers withdrew to Winter Harbor for safety, and their homes and mills upriver at the falls were burned. In 1693, a stone fort was built a short distance below the falls, but it was captured by the Indians in 1703, when 11 colonists were killed and 24 taken captive to Canada. In 1708, Fort Mary was built near the entrance to Biddeford Pool. The town was reorganized in 1718 as Biddeford, after , a town in from which some settlers had emigrated. After the in 1759, hostilities with the Indians ceased.

In 1762, the land northeast of the river was set off as Pepperellborough, which in 1805 would be renamed Saco. The first bridge to Saco was built in 1767. The river divides into two falls that drop 40 feet, providing for mills. Factories were established to make boots and shoes. The developing also had quarries and brickyards, in addition to lumber and grain mills. Major manufacturing facilities were constructed along the riverbanks, including the Laconia Company in 1845, and the Pepperell Company in 1850. Biddeford was incorporated as a city in 1855.

The mills attracted waves of immigrants, including the Irish, Albanians and s from the province of . At one time the textile mills employed as many as 12,000 people, but as happened elsewhere in , the industry entered a long period of decline. Today, only one textile company, WestPoint Home, remains in the city. The last log drive down the Saco River was in 1943, with the last log sawn in 1948. Biddeford's name is engraved near the top level of the The Pilgrim Monument, in Provincetown, , along with the names of some of the oldest cities and towns in New England.

Biddeford is home to major institutions including Southern Maine Medical Center and the University of New England, a fast-growing school located along the coast. The city also possesses a wide array of community facilities including public beaches, an ice arena, a full-service , and one school which has been recently recognized as “National Schools of Excellence”.

Anchoring Biddeford's historic downtown are McArthur Library and the City Theater for the Performing Arts.

Biddeford is one of Maine's fastest-growing commercial centers, due to its close proximity to Seacoast New Hampshire and Northern Massachusetts. In recent years, strip-malls have developed along the State Route 111 corridor. In late 2006, a 500,000-square-foot shopping center known as The Shops at Biddeford Crossing opened, with 20 stores and 5 restaurants.

Recent interest in revitalizing the downtown area has brought new life to the old mills. The North Dam Mill is one example of this movement offering retail stores, art studios, cultural events and upscale housing.

Biddeford was the eastern terminus of the now-defunct New England Interstate Route 11, which ended in . State Route 111, which travels through Biddeford's main commercial corridor, is now numbered in Old Route 11's place.

The city has almost 15 miles of frontage along the Saco River, and an Atlantic coastline on which the seaside neighborhoods of Hills Beach, Biddeford Pool, Fortunes Rocks and Granite Point are located. Biddeford includes , a located about a mile offshore from Biddeford Pool.

The city is crossed by Interstate 95, U. S. Route 1, and state routes 5, 9, 111 and 208. It is bordered by Saco to the north, the to the east, the towns of Dayton and Lyman to the west, and the towns of and Arundel to the south. The Little River forms a portion of the border between Biddeford and the neighborhood of Kennebunkport, in Biddeford's most southerly region (Granite Point). East Point, located on the peninsula of , is the easternmost point in York County. While Maine (as a whole) is politically and colloquially known as part of Northern New England, Biddeford's geography technically places it more in line with Central New England.

Timber Island, the most southerly point in the City of Biddeford, lies in Goosefare Bay at the mouth of the Little River, and is accessible at low tide from Goose Rocks Beach. The island is preserved under a ; the owners allow daylight visits by the public. Currently, there is talk that the land trust which owns Timber Island and Timber Point, shall be selling the property to the U.S. government at a reduced price, thereby securing for conservation one of the largest parcels of undeveloped land in South Coast Maine.

There were 7,636 households out of which 28.4% had children under the age of 18 living with them, 44.4% were married couples living together, 12.2% had a female householder with no husband present, and 39.1% were non-families. 29.7% of all households were made up of individuals and 11.1% had someone living alone who was 65 years of age or older. The average household size was 2.32 and the average family size was 2.88.

Biddeford has one sister city: