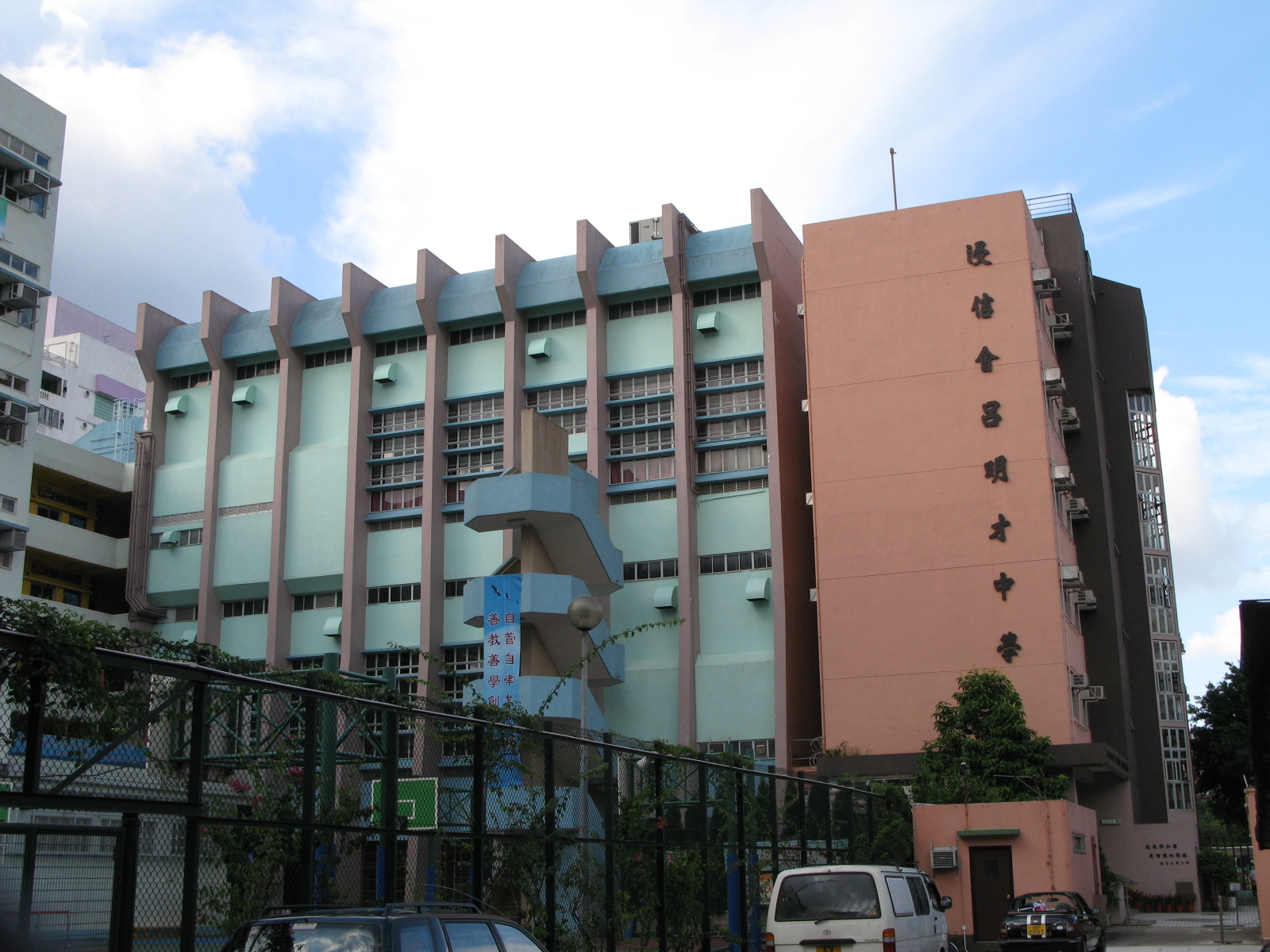 Baptist Lui Ming Choi Secondary School (BLMCSS) is a in . It was established in by the . Situated in the new town of , the school is a offering education at the first to seventh form levels education in . English is the major whereas Cantonese Chinese are used for subjects like Chinese History, Chinese Literature etc., and Mandarin Chinese () is also taught.

Under the , the school was founded by the . It is one of the five secondary schools operating under the supervision of the Convention. The School’s is "明道致知" in Chinese , derived from the idea of , a in and incorporated this into belief, which means "understanding ’s teachings to become wise and intellectual". This concludes the expectation for its graduates. The school aims at enhancing student's virtue (德), wisdom (智), physique (體), fellowship (群), aesthetics (美) and spirituality (靈). The Christian-styled education of the school is reflected in the quote from the displayed at the main entrance of the campus. It says: "The fear of the Lord is the beginning of wisdom, and the knowledge of the Holy One is understanding." (Proverbs 9:10).

Though the School holds the spread of the to be one of its missions, the atmosphere is relatively open and liberal, not only in the religious aspect, but also the socio-political. Till to date, the School and its Student Union hold memorial service and activities concerning the Tiananmen Square protests and which happened in mainland , .

Situated at the bank of , the campus development is restrained. Nonetheless, the school extended the new wing in 1999 and undertook renovation and classroom reshuffle in order to facilitate the setting up of its multimedia laboratory and language laboratory. In the construction plan, a was included. The building of garden expanded the very limited space in where casual activities or even relaxation for students and staff could be taken place. Apart from classrooms and congregation hall, the school equips with science laboratories, playgrounds, rooms for various kinds of art, language and multimedia facilities for modern education. The school applied to Education Bureau (EDB) in 2007 for a new campus site reserved under the Kowloon-Canton Railway Corporation Tai Wai Maintenance Centre Property Development Project, but lost to Shatin Tsung Tsin Secondary School.

Witnessing the vast change brought by the education reform in Hong Kong, the school was transformed to fit into the new environment and well preserve its teaching and learning quality. The new curriculum with new highlight on and will be introduced. Syllabi for public examination for the entrance of university will soon be revised to catch the structural change of Hong Kong's educational system, from seven years secondary education to six years whilst one more year will be added to .

The school has a strong structure bounding both internally and externally. The 3 main internal bodies, the Parents' Association, the Alumni Association and the Student Union, engage intimately in various aspects of school operations. Externally, the School has strong linkages with secondary schools over the city and educational institutions. In , the Education and Manpower Bureau named the school as one of the twenty school tiding direct partnership with the best 20 in .

It is one of the few secondary schools hosting an international me. Each year, there is at least one foreign student joining in for one academic year. In the past, there were exchange students from , , the , , , , , , and so on. Local students are encouraged to apply for exchange opportunities abroad. There are around 5 to 10 senior form pupils experiencing their life-time adventures on different continents.

Like most other secondary schools in Hong Kong, Baptist Lui Ming Choi Secondary School serves form 1 through form 7. Form 1 to 3 are Junior classes; 4 and 5 are Certificate; and, 6 and 7 are Matriculation.

Junior classes studies subjects of all streams like languages, computer, arts, science, sports and many others. As a Christian school, studied of bible is included in the curriculum. Certificate classes are targeted at the , an open certificate examination for secondary education. Students are divided into arts, business or science stream according to their interests. For matriculation, their studies is further divided and confined within their preferred stream.

From the academic year 2009, the Form 4 class will be ceased, and those calsses will be replaced into NS1, NS2 and NS3 respectively to complying with the . [ [http://www.blmcss.edu.hk/nss/cs_so.pdf Class Structure and Subject Offered] (accessed 4/11/2007)]

In this school, all students and all teaching staffs are assigned into one of the four houses, they are called Red House (紅社), Yellow House (黃社), Blue House (藍社) and Green House (綠社) respectively. In each teaching year, there are several competitions held between those four houses including the Swimming Gala and Athlete Meet. And some of other matches are also competited among those four houses. Yellow House is the overall champion this year (07-08).

The School traditionally accommodates an active student body. Students participate widely in programmes and competitions of sports, music, performing arts, technological innovation and so on. There are more than 80 extracurricular activities students, most numerous options among schools in Hong Kong. Numerous students secured prestigious awards like in Hong Kong.

Baptist Lui Ming Choi Secondary School boasts as one of the HK secondary schools with the largest variety of extracurricular activities for students to participate in, with particular strengths in sports, drama, and music. Many prizes have been awarded to the students of BLMCSS. Below is a list of student clubs:

The Baptist Lui Ming Choi Secondary School Student Union (also known as BLMCSSSU or LMCSU) has the longest history in its sort among schools in the East . Formed in 1983, the has been playing a key role in students' activities, as well as external involvement. Departments of the Union organise ranges of programme and activity to enhance learning experience and campus life. It also connects the student population with other schools' fellows through joint schools functions and friendly dialogues.

The Union is a organisation which consists of two main bodies: the Executive Committee, which is the cabinet executing mandated power, and the Representative Council, holding power of amending the Constitution of the Union, passing working plans, budgets, approving reports, debate and vote on Committee proposals. In principle, the Committee and the Council cooperate to enact and push forward any proposals and plans. The principal acts as the President-in-Nomine. 2 to 3 teaching staff are assigned by the Principal to be Advisors to supervise and guide the operation of the Union, whom are seen to be real supervisors. The Committee coordinates working schedule and details with Advisors' consent, though not bounded in the Constitution.

The Constitution had been initially drafted in the early 1980s when several minor amendments were taken. It was until years around 1999 to 2001, the Constitution was completely reviewed. Two new drafts were proposed to the Council where the second one, which is the currently enforced one, were passed on the 19th Union Council. During those years, there was deep division among student leaders and head teaching staff. The conflict was ended up with a Committee concession to modify the more radical edition into a moderate one. Nevertheless, the period of quarrel divided the student leadership into polars that affected the politics in subsequent Committees.

The Committee is elected annually and s are held by the Election Committee under the Council. All students of the School are eligible to cast one against proposed (s). They choose between or among one of the cabinets, or cast a confidence vote towards the single proposed cabinet. Usually, proposed cabinet(s) acquire 3 to 4 weeks to campaign. During the campaigning period, there are 2 rounds of policy s held in the compulsory basis in front of all students, where they can post questions against cabinet(s). If no valid result were generated, the Election Committee will meet and hold the second round of election, till the third round, after that the President-in-Nomine will assign a student to be the to form his/her cabinet.

Counselors are elected once a year. There is one seat for every class, therefore 31 in total. The method adopted is and monitored by the class teacher at the academic year commencement in September. Nomination is open to all in the class except members in any proposed cabinet(s) in the Committee election. Generally, most senior will seek and have sort of association with proposed cabinet(s) to complete the political system of the Union.

Due to the influence of the serving culture in their , are observed in facets of social commitment. Large portion of graduates pitched themselves into education, some of them in academic research. Similarly large portion achieved qualification in professions like legal, medical services, and engineering business.