Sudan I (also commonly known as CI Solvent Yellow 14 and Solvent Orange R), is a lysochrome, a diazo-conjugate dye with the chemical formula of 1-phenylazo-2-naphthol. Sudan I is a powdered substance with an orange-red appearance. The additive is mainly used to colour waxes, oils, petrol, solvents and polishes. Sudan I has also been adopted for colouring various foodstuffs, including particular brands of curry powder and chili powder, although the use of Sudan I in foods is now banned in many countries, because Sudan I, Sudan III, and Sudan IV have been classified as category 3 carcinogens (not classifiable as to its carcinogenicity to humans)[1] by the International Agency for Research on Cancer.[2]

Sudan I is still used in some orange-coloured smoke formulations and as a colouring for cotton refuse used in chemistry experiments.

Sudan I is a rodent carcinogen[citation needed] — laboratory tests on rats showed growth of cancerous tumours in the liver and bladder. These tests have led to the additive being banned from use in foods throughout the EU, as it may pose an increased risk of cancer.

Sudan I is also present as an impurity in Sunset Yellow, which is its disulfonated water-soluble version. 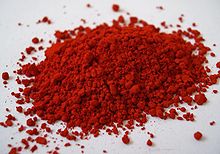 In February 2005, Sudan I became a prominent news topic, particularly in the United Kingdom. A Worcestershire sauce produced by Premier Foods was found to be contaminated by the carcinogenic dye. The origin was traced to adulterated chili powder. The sauce was used in hundreds of supermarket products, such as pizzas and ready-made meals, and the contamination led to over 400 products being taken off the shelves. In South Africa, Sudan I traces were found in several spices (Robertson's Peri-Peri Sauce and two Taj Mahal spice products) in 2005 and 2007.

Due to the scare, the government of Sudan requested the name of the dye be changed.[4]