Chevening
This article is about Chevening House. For the scholarship scheme, see Chevening Scholarship. 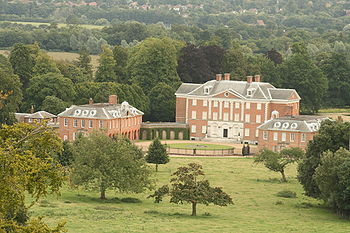 The 115-room mansion, situated near a lake in the midst of a 3,500-acre (1,400 ha) estate, is a three-storey, symmetrical red brick structure in the English Renaissance style. It may have been designed by noted 17th-century British architect Inigo Jones. Staying there as a guest in 1911, the former Prime Minister Lord Rosebery crossed out "Chevening" at the head of a piece of writing paper and substituted "Paradise".[2]

The Chatham Vase in the grounds of Chevening

The house was the family seat of the Earls Stanhope, and was bequeathed to the Nation by the 7th and last Earl Stanhope. He left the heavily endowed manor to be managed by a body of trustees. The Chevening Estate Act stipulated that the future resident should be the Prime Minister, a Cabinet Minister, the widow or lineal descendant of King George VI, or the spouse, widow or widower of such a descendant.

Lord Stanhope was apparently impressed by the young Charles, Prince of Wales, and hoped that he would reside at Chevening. In 1974, the Prince accepted the prospect of living on the estate. According to his biographer, Jonathan Dimbleby (for whom Prince Charles himself arranged access to unpublished royal diaries and family correspondence), at that time he was contemplating an eventual marriage to Hon. Amanda Knatchbull, granddaughter of his great-uncle the 1st Earl Mountbatten of Burma: "[I]n 1974, following his correspondence with Mountbatten on the subject, the Prince had tentatively raised the question of marriage to Amanda with her mother (and his godmother) Patricia Brabourne. She was sympathetic, but counselled against raising the issue with her daughter, who had yet to celebrate her seventeenth birthday.".[3] Amanda's paternal great-aunt had been Lady Eileen Browne, daughter of the 6th Marquess of Sligo, whose barren marriage to the last Earl Stanhope (who had no other near relations) led to Chevening's being placed at the disposal of the Royal Family. If Amanda were to become Princess of Wales, the Prince's acceptance of Chevening would make some familial sense.

But this was not to be, although the Prince did visit the house several times. In a note of April 24, 1978 to his private secretary, Sir David Checketts, Prince Charles observed, "I know there are advantages -- particularly financial ones -- in the Chevening set up, but I regret to say I am rapidly coming to the conclusion that they are the only advantages."[4] In June 1980 Prince Charles wrote to Margaret Thatcher to renounce residency at Chevening (without actually having resided there). Weeks later, he purchased Highgrove House in Gloucestershire. By then, according to Dimbleby, Amanda Knatchbull had declined the Prince's proposal of marriage,[5] and he would soon begin courtship of Lady Diana Spencer.[6]

It has been suggested that Chevening and its former parsonage are the original for Rosings Park, home of Lady Catherine de Bourgh, and the Hunsford rectory in Jane Austen's Pride and Prejudice. Austen's cousin was the rector at Chevening from 1813 and she had other family members living in the area whom she stayed.[8]