/kəˈhoʊn/; elevation 3,777 ft (1,151 m)[1]) is a moderate-elevation mountain pass between the San Bernardino Mountains and the San Gabriel Mountains in Southern California in the United States. It was created by the movements of the San Andreas Fault. The Mojave Desert[3] pass provides an important economic link from the Greater San Bernardino Area, in the Los Angeles metropolitan area, to Victor Valley, and northeast to Las Vegas.

In 1851, a group of Mormon settlers led by Amasa M. Lyman and Charles C. Rich traveled through the Cajon Pass in covered wagons on their way from Salt Lake City to Southern California. A prominent rock formation in the pass, where the Mormon trail and the railway merge (at 34.3184,-117.4920, near Sullivan's Curve), is known as Mormon Rocks.

Located at the Highway 138 and Interstate 15 junction, the Mormon Rocks are visual evidence of the San Andreas fault lying beneath the California surface.

The Cajon Pass area is known for high wind, turbulence and fog.[10] The weather over the pass can vary, from foggy days with poor visibility to clear afternoons where aircraft are bounced by gusting Santa Ana winds that top 80 mph (130 km/h). The wind in this area is predominantly out of the west, although in Santa Ana and other weather conditions it may be out of the north or the southeast. Air spilling over the San Gabriels can cause fairly violent up- and downdrafts. On a normal day, with the wind out of the west, turbulence usually starts a few miles west of Rialto and continues a few miles to the east, growing in strength above the altitude of the mountains and especially over the pass itself near the HITOP VFR intersection. In Santa Ana conditions, up- and downdrafts can become especially violent northeast of Ontario Airport, and turbulence can be experienced all the way east to the Banning Pass (itself known for turbulence.) It's important to note that the mass and wing loading of an aircraft determines its sensitivity to turbulence, so what may seem violent in a Cessna 172 may seem only mild to moderate in a Boeing 747.[11] In the 2006 Mercy Air 2 accident, an air ambulance helicopter collided with mountainous terrain near the pass in foggy weather. 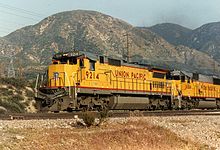 The California Southern Railroad, a subsidiary of the Atchison, Topeka and Santa Fe Railway, was the first railroad to use the Cajon Pass as a route through the mountains. The rail line through the pass was built in the early 1880s as part of a connection between the present day cities of Barstow and San Diego.[12][13] Today, the Union Pacific Railroad and BNSF Railway (the successor to the Santa Fe) use this pass to access Los Angeles and San Bernardino. Due to the high volume of trains, noteworthy scenery and easy access, it is a popular location for railfanning, and numerous photographs of trains on Cajon Pass appear in books and magazines about trains. The current Amtrak Chicago-Los Angeles Southwest Chief passenger train travels through the pass.

The Union Pacific Railroad operates and owns one track through the pass, on the previous Southern Pacific Railroad Palmdale cutoff, opened in 1967. The BNSF Railway had two tracks and began to operate a third main track in the summer of 2008.[14] The railroads share track rights through the pass ever since the Union Pacific gained track rights on the Santa Fe portion negotiated under the original Los Angeles and Salt Lake Railroad. The original BNSF (ATSF) line was constructed in 1890 and later roads, U.S. Route 66 and I-15, roughly followed this route. The 3.0% grade for a few miles on the south track is especially challenging for long trains, making the westbound descent potentially dangerous, as a runaway can easily occur if the engineer is not careful in handling the brakes. The second track, built in 1913, makes a 2-mile (3.2 km) loop around the hills at a lower 2.20% grade. It ran through two short tunnels, but both were removed in order to add the third main track that runs parallel to the 1913 line.[14] Speeds of 60 and 70 mph (97 and 110 km/h) may be seen on the straighter track away from the pass, but are typically 14 to 22 mph (23 to 35 km/h) ascending and between 20 and 30 mph (32 and 48 km/h) while descending.[14] The third track enables a capacity of 150 trains per day on the BNSF lines.[14]

Cajon Pass was the site of a major train accident on 14 December 1994, when a westbound Atchison, Topeka & Santa Fe intermodal train lost control in the Cajon Pass and crashed into the rear of a westbound Southern Pacific coal train just below California Highway 138 between Alray and Cajon. The steep downhill grade south of the pass had earlier been a contributing factor in the 12 May 1989 San Bernardino train disaster.

The Mojave Freeway (I-15) was built in 1969 over the Cajon Summit west of the Cajon Pass. It is a major route from Los Angeles and the Inland Empire to Las Vegas. The freeway runs above and parallel to an original stretch of historic Route 66 and 395. This stretch, which is now known as Cajon Boulevard, is a short but well-preserved fragment dating back to a rerouting and widening of the highway in the early 1950s. Only the southbound/westbound lanes are in use; the northbound/eastbound lanes and corresponding bridges are closed to through traffic. It is along this stretch of road, accessible via either the Kenwood Drive or Cleghorn Road exits that some of the best aforementioned trainspotting areas may be found.

The historic Summit Inn, off the Oak Hills exit at the summit of the pass, is a historic Route 66 diner and has been at its present location since 1952. Some maps may show the Cajon Pass as a feature on SR 138, which crosses I-15 south of the summit between West Cajon Valley and Summit Valley. The highest point on I-15 between Los Angeles and Victorville is thus sometimes identified as Cajon Summit. However, the entire area, including Cajon Summit, is often called Cajon Pass.

The Pacific Crest Trail goes directly through Cajon Pass, and during the hiking season up to several hundred thru-hikers will pass through this area after walking one of the hottest, driest, and most grueling sections of desert on the trail. The McDonalds restaurant at the pass happens to be very close to the trail, and it is famous among thru-hikers (who often arrive dehydrated), and most will stop here for water and salty food. Many hikers also spend the night in one of the motels at Cajon Pass.

In addition to transportation infrastructure, three high voltage Southern California Edison 500 kV power lines cross the summit as well. These power lines head to the Lugo substation northeast of Cajon Pass and connect to Path 26 and Path 46. Both Path 26 and 46 provide the Los Angeles metro area another source of electricity generated from fossil fuel power plants in the Four Corners region, and hydroelectric dams along the Colorado River.

During October and November 2003, a number of wildfires devastated the hills and mountainsides near and around the pass, forcing the closure of Interstate 15. The following winter, rains in addition to burnt vegetation caused a number of landsides to further close the freeway pass.[citation needed]

In addition to wildfire hazards, Cajon Pass is notorious for wind hazards. In gusty conditions it is especially difficult to navigate through it as the Santa Ana winds usually push through that area. The winds sometimes reach gale-force strength. As a result, there are usually high wind advisories as well as road signs posted throughout the area. It is not uncommon to see overturned trucks during such windy weather there.[citation needed]

Cajon Pass gets snow occasionally, sometimes enough to close the pass temporarily. When there is snow, the California Highway Patrol will set up checkpoints on the freeway. Since most Southern Californians are without snow tires or snow chains, they are forced to turn back, or wait until the snow has stopped and the freeway has been cleared of snow.[citation needed]

When there is high wind or snow in the Cajon Pass, it is fairly common for weather forecasters or reporters for San Bernardino, San Diego, and Los Angeles-area televisions stations to do location reports from the Cajon Pass.[citation needed]

The San Andreas Fault passes through the Cajon Pass (crossing I-15 on the south side of the summit) and is responsible for the unique local geography.[15]