Nein (Arabic: نين‎, Na'in, lit. Charming, Hebrew: ניין‎, called in English Bibles Nain or Naim) is an Arab village in Israel that forms part of the Bustan al-Marj Regional Council in the Lower Galilee. Located 14 kilometers (8.7 mi) south of Nazareth, Nein covers a land area of approximately 1,000 dunums. Its total land area consisted of 3,737 dunums prior to 1962.[1] According to the Israeli Central Bureau of Statistics, Nein had a population 1,600 in 2005.[2] The city hall for the Bustan al-Marj Regional Council is located in Nein.[3]

Nein lies a short distance from Mount Tabor.[4] A hill known in Arabic as Tell el-Ajul lay on the path that ran between Nein and nearby Indur, an Arab village destroyed in the 1948 Arab-Israeli war.[5] While Edward Robinson describes Nein as lying on the northern slope of a hill called, "the little Hermon," and it is described in biblical guidebooks as lying at the foot of the Hill of Moreh.[6] 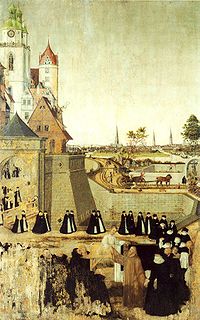 The resurrection of the young man of Nain, by Lucas Cranach, in 1569.

Edward Robinson (scholar) and Eli Smith, who visited Palestine in the mid-19th century, identify Nein as, "the Nain of the New Testament," where, according to the Bible's (Gospel of Luke 7:11-17), Jesus resurrected a young man.[7]

According to Luke, a widow, who was living in Galilee, had lost her sole remaining son, and thus all she had to live for. When Jesus saw the dead son being carried out and the mourning widow, he felt compassion for her. He walked towards the stretcher, touched it, and told the man: "Young man, I say to you, rise!" The man came alive, sat up, and began to speak. The people who were standing around were all very struck by the event, and the report of it spread widely around the region.

Nein is mentioned in the writing of Eusebius (c. 263–339) and Jerome (c. 347 – 420) as being situated near Endor (Indur).[7] Its identity as a biblical site was recognized by the Crusaders, who built a church there to commemorate the site of the miracle, a church rebuilt by the Fransciscans.[7][4] Nein has been visited by many travellers and pilgrims since. Robinson and Smith also note that Nein decreased in size over the ages, and was at their time of writing but a small hamlet, inhabited by only a few families.[7] At the end of the 19th century, Nein was described as a small village made of stone and adobe, with a small mosque, named Mukam Sidna Aisa, to the north.[8]