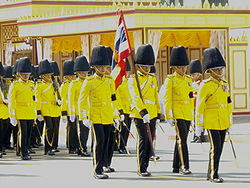 The Royal Thai Marine Corps (Thai: นาวิกโยธินแห่งราชอาณาจักรไทย) are the marines of the Royal Thai Navy, the corps was founded in 1932 when the first battalion was formed with the assistance of the USMC. It expanded to a regiment in 1940 and was in action against communist guerrillas throughout the 1950s and 1960s. During the 1960s the USMC again helped with expansion to a brigade. The RTMC saw further action on the Malaysian border in the 1970s, where it then expanded two brigades.

According to Thai military history, the "Thahan Ma-Rine", or "Marine Soldiers" were established in 1833 during the reign of King Rama the Third. The word "Ma-Rine" is a direct translation of the English word, "Marine". The development of the Marine Corps can be divided into three periods:

The Marine Corps, or Marine Soldiers, in the former age were mostly a Royal Honor Guard and involved with the security of the King when he travelled around the country.

On March 2, 1913, the Ministry of the Navy set up a new unit that caused the Marines to be organized as follows:

The vehicle division played a very important role because Marines were included in this battalion. The Revolution in 1932 replaced Thailand's absolute monarchy with a democratic regime which also caused a reorganization of the Navy. As part of this reorganization, the vehicle battalion became the Marine Corps Battalion under the Bangkok Navy Station. This Battalion is reguarded as the first Marine Corps Battalion in Thailand.

After WWII ended, the Marines were used to help disarm the Japanese Army at Baan Pong District in Ratchaburi Province. In 1950 when there was an uprising in the South of Thailand, Marine Corps Troop 6 was sent to help restore the peace in Narathiwat Province.

On June 29, 1951, the government disbanded the Marine Corps Bureau and scattered the Marines into other departments for four years. During that time, the Cold War between Western Democracies and Eastern Communist Nations started to grow and become a more serious concern. Luckily, the Thai Marine Corps were supported by both the United States Military and also the Royal Thai Navy.

As the Cold War progressed, the Thai Government and Royal Thai Navy realized the important role of the Thai Marine Corps and reestablished the Marine Corps Department on July 30, 1955 and started a new era for the Marines. In 1961, tensions flared over Preah Vihear Temple on the Cambodian border. This tension along the Chanthaburi and Trat borders with Cambodia gave the Marine Corps one of their first assignments. Since 1970, the Chanthaburi-Trat Task Force has been officially protecting this area along the Cambodian border.

Since the year 1975, Marines have been working in Narathiwat from then til now by setting up the special forces marine corps in the South for suppressing the communists. In 1977, the Marines captured the communist camp at Krung-Ching in Nakhon Si Thammarat Province and stayed there until pulling back in 1981.

The Royal Thai Navy has also sent the Marines to help in suppressing the many violent demonstrations and coups in Bangkok. The Marines are still responsible for border security in Chanthaburi and Trat provinces. They have also fought in the battles of Baan Hard Lek, Baan Koat Sai, Baan Nhong Kok, Baan Kradook Chang, Baan Chumrark and also in the North East Region in the battle of Hard Don Nai in Nakhon Phanom Province.

Many Thai Marines have died in past wars and continue to be wounded and killed in active service today. In Sattahip, the Marine Corps has built a monument to all Marines as a memorial to those who have died bravely in battle as Royal Thai Marines.