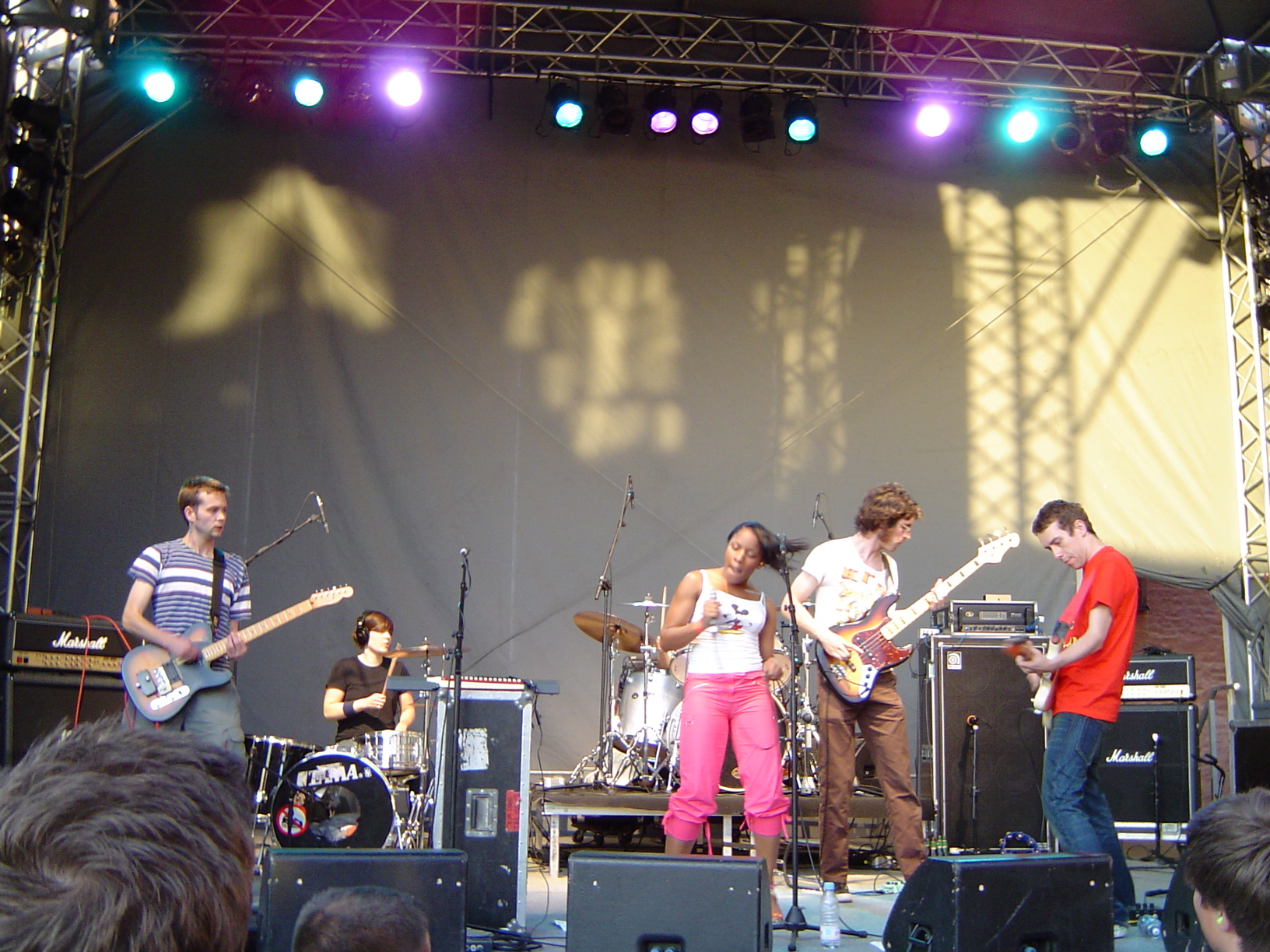 Img_capt = The Go! Team playing at "Accelerator The Big One" in , 2004
Background = group_or_band
Genre = Dance

The Go! Team are an English, -based six piece band (with two s) whose songs are a mixture of action theme songs, cheerleader chants, guitars and early hip hop, with a hint of '70s . Their songs are a mix of live instrumentation and samples from various sources.

The Go! Team's first full-length album, "", was released in the UK and Europe on the label in , to widespread critical acclaim.

In June 2004, Ian Parton recruited a band in order to play as a supporting act for Franz Ferdinand.

The album was nominated for the Mercury Prize in , which coincided with an international release of a "legal" version of the album wherein the album was partially re-recorded, replacing samples which could not be cleared for commercial use with alternatives.

The band's popularity increased with the re-issue of "Ladyflash" in the UK, resulting in national primetime airplay on radio stations such as and the Atlanta, USA based 99X. They achieved further popularity when their single "Get It Together" from "Thunder, Lightning, Strike" was featured in trailers for the videogame "", with the song eventually becoming identified with the game. [http://www.mediamolecule.com/2008/01/16/littlebigletters-the-letters/]

On the 13th of May 2007, The Go! Team announced the release of their new single and subsequent album on their website. [cite web|url=http://www.thegoteam.co.uk/flash/News.html|title=News|date=|accessdate=2007-09-10]

The single, "Grip Like a Vice", was released on 2 July 2007, and the new album, called "", was released on 10 September in the UK and a day later in the US. The new record continues The Go! Team’s mix of samples, live band recordings and an array of special guests, including hip-hop legend , electro diva Solex and ex-singer . [cite web|url=http://music.aol.ca/article/the-go-team/144/|title=There's an "I" in The Go! Team|date=|accessdate=2007-09-14] Their new single "Milk Crisis" was released via free download on 21 July 2008. They later released a 2-disc limited edition of the record with b-sides of the album including "Milk Crisis", "Phantom Broadcast", "A Version Of Myself", and a remix of "Grip Like a Vice" by .In 2008 The Go! Team contributed the song "Templates from Home" to the charity album, "".