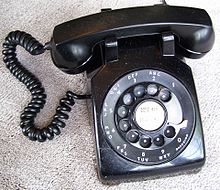 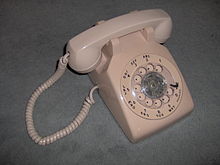 By 1975, the Model 500 layout was essentially unchanged, but it used a revised dial, modular cords, and was available in a variety of colors 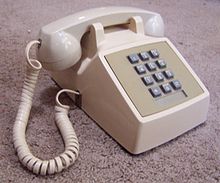 The Western Electric model 500 telephone series was the standard desk-style domestic telephone set issued by the Bell System in North America from late 1949 through the 1984 Bell System divestiture. Millions of model 500-series phones were produced and were present in almost every home in North America. Many are still in use today thanks to their durability and ample availability. Its modular construction made manufacture and repair simple, and facilitated a large number of variants and derivatives with added features. Touch-Tone was introduced to home customers in 1963 with the model 1500 telephone, which had only the 10 number keys. In 1968 the model 2500 telephone was introduced, which added the * and # keys. The model 2500 is still in production today by several manufacturers, over 40 years after it was introduced.

The original Western Electric Model 500 was designed by the firm of industrial designer Henry Dreyfuss, the product of several years of research and testing, and introduced in 1949. The 500 replaced the Dreyfuss-influenced Western Electric Model 302, introduced in 1937, and improved upon several areas of design that were problematic in the earlier models. For example, the Model 302 utilized a porcelain-coated dial plate, with the numbers printed inside the finger holes. After years of use, the printed numbers and the even the dial plate's porcelain coating would wear off. The design of the 500 corrected this by molding them into the plastic instead of printing them on the surface. The numbers were moved outside of the dial to enable the user to see the numbers while the dial was spinning back to its resting position, to position his finger to dial the next digit. This arrangement also had the benefit of reducing mis-dialed calls.

Originally, the 500 was available only in black and had a rotary dial with a black-painted metal finger-wheel. Black remained the most popular color throughout the model's production.[citation needed] Within a few years the Model 500 was available in a variety of colors, and the metal finger wheel was replaced with a clear plastic rotary dial, by about 1964. The 500 was also the first phone to use the G type handset, which remains the standard handset on many phones, including public payphones.

The Dreyfus design adapted itself well to Touch-Tone service. The earliest experimental Touch-Tone phones used the original Dreyfus design almost unchanged; their keypads, in varying layouts, were placed in a roundel in the opening where the dial would normally be, with the phone number in a small window below. The 1500 and 2500 models adopted a more angular style; the curves of the original design gave way to a raised border forming a lip around the finely-ribbed faceplate, in the middle of which the keypad and number window were centered.

Western Electric model 1500D, made in March 1968 in the color Aqua Blue with hardwired handset and line cords

The Western Electric model 1500 telephone revised the 500 design to use Touch-Tone dialing, with buttons for only the digits 0-9. Handset cords and line cords were hardwired. It was produced from 1963 to 1968. In addition to the basic single-line model 1500D, the Western Electric 1500-series included many related variations and special purpose models with additional features. This included sets with a headset jack, 2-line sets, keysets (1560 series), Call Directors, panel phones (1750 series), industrial phones (1520), and automatic dialers (1660).[1] 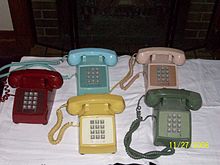 Western Electric model 2500 telephones in a variety of colors

The model 2500 telephone entered production in 1968. It added the # key and the * key to the keypad. These keys were initially unused by ordinary customers, but would later be used for vertical service codes, and voice mail menu navigation. The 2500 is the member of the 500 family that is most commonly encountered today, as it is still produced by several companies. Handset cords and line cords were hardwired until 1974, when modular connectors were introduced.

The phone consisted of a rotary dial, a handset cradle, switchhook, and a handset (sometimes called the receiver) wired to the base, and was constructed of a molded thermoplastic upper housing covering a steel chassis. The user interface was extremely simple with only the dial and switch hook buttons to operate. There were no other components, switches, or controls (except for a ringer loudness control dial on the bottom). The handset cradle was a molded part of the upper housing, formed of 2 U-shaped "chairs" that held the handle part of the handset. Each chair had a round plastic button that sat atop a pair of levers connected in a spring-loaded yoke that operated the switchhook, pressing the buttons down ended the call and placed the phone "on hook". The plastic face of the dial under and surrounding the finger plate was part of the rotary dial mechanism which was exposed through a large circular hole in the phone's housing. On the bottom, the flat steel plate of the chassis was exposed. The handset cord protruded from the left side of the housing at the base, near the rear, and the line cord emerged from the rear at the base. 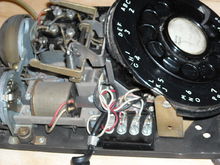 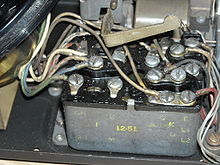 Internally, the phone contained simple circuitry composed of a small number of passive electrical, electronic and electromechanical components. The dial and the phone had no separate power supply connection and were powered entirely from the telephone line; when it was on-hook and not ringing, it used virtually no power.

The most complex internal part was the rotary dial mechanism, an assembly of gears, cams, springs, and electrical contacts which electromechanically generated a timed train of line loop-break pulses when the dial finger plate was rotated and released. Standard Touch-Tone phones are able to generate 7 tones in a grid of 3 by 4, while some special purpose phones added a fourth column of keys A,B,C and D, which were generally reserved for military use (in the AUTOVON system). Pressing a key generates the appropriate pair of DTMF tones for that key. Original sets used a transistor oscillator; newer phones make use of an integrated circuit.

The ringer was a mechanical bell consisting of two bell gongs of slightly different sizes (for different pitches) and a striker between them driven by a solenoid; when the solenoid was energized by AC ringing current (about 90 V at 20 Hz), it struck the two gongs alternately, producing a distinctive sound composed of the rings of the two gongs combined in rapid alternation. On phones with a ringer loudness control, one gong was mounted off-center on the loudness control wheel; turning the wheel moved the gong toward (for quieter) or away from (for louder) the striker. Even so, the model 500 ringer was fairly loud and could be heard a few rooms away. The ringer was not able to be turned off by default, but this feature could be enabled by adjustment of a part of the ringer. Also, because of the mechanical design of the ringer, the striker would hit the brass bells if the phone was subjected to a sufficiently sharp mechanical shock, such as being banged down on a table, kicked, or dropped, and a short ring would be heard. This effect was faithfully represented in various films and TV shows.

Because phones in the Bell System were owned by the telephone company, which was responsible for keeping them in good repair, the Model 500 was designed to avoid repairs. As a result, it was extremely rugged and reliable, and intended to last for decades with practically no maintenance. The 1940s-era technology of the 500 made extensive use of solid metal components and point-to-point wiring, and most components were modular and simple to remove and replace. The wiring system heavily employed point to point wires terminated with crimped U-lugs and slotted screw terminals; most electrical connections in the phone could be disconnected or reconnected in seconds with just a slotted screwdriver.

Originally the line cord and handset cord were secured by screw down terminals at both ends, with a strain relief anchor. Tubular rubber covers at the ends resisted tangling and wear. The line cord (the cord that connected a desk phone to the wall) was originally the same color as the phone. In approximately 1973, the line cords were changed to a neutral gray color and from round to flat. In the late 1960s a need arose for a plug and jack system. At first a proprietary four prong plug was used only for the wall end of the line cord. A few years later much smaller "modular" plugs were introduced at both ends of both cords. These were less rugged and more convenient. A new standard RJ-11 jack was molded with lips to grip firmly the edges of the hole in the Model 500 housing. 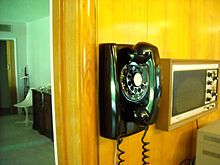 Telephones derived from the basic Model 500, using some of the same components, included the Model 554 wall-mounted phone and the 1500 and 2500 Touch-Tone phones. In the mid-1950s, to avoid disposing of older phones, Western Electric manufactured a 500-style plastic replacement shell to update the appearance of the 302, calling it the Model 5302. This model used the internal components of Western Electric's earlier Model 302 phone, and was issued with both the F and G style handsets.[3]

In addition to the model 500, the Western Electric 500-series included many related variations and special purpose models with additional features. This included phones with dial lights (500U), party line sets (501), keysets (540 and 560 series), Call Directors, panel phones (750 series), industrial and outdoor phones (520 and 525), and automatic dialers (660).[4]

As with all telephones of the time in the US, the 500 phones were owned by the local Bell Operating Company, most of which were owned by AT&T, which also owned Western Electric itself—and leased on a monthly basis by customers. This monopoly made millions of dollars for AT&T, with the secondary effect of limiting phone choices and styles. AT&T strictly enforced policies against buying and using phones by other manufacturers, purportedly to ensure the technical integrity of their network. Most phones made by Western Electric, starting in about 1968, carried this disclaimer permanently molded into their housings: "BELL SYSTEM PROPERTY--NOT FOR SALE." Telephones were also sometimes labeled with a sticker marking the Bell Operating Company that owned the telephone. After some consumers began buying phones from other manufacturers (in the wake of legal developments not favoring AT&T's ban against third-party equipment) AT&T changed its policy for its Design Line telephone series by selling customers the phone's housing but retaining ownership of the mechanical components, so customers were still required to pay AT&T a monthly leasing fee.

In 1983, after the court ordered divestiture, AT&T started selling phones outright to the public through its then-new American Bell division. Many customers were offered the option to buy their currently leased telephones in place, and many accepted the offer. AT&T closed its USA consumer telephone manufacturing plants in 1986, and moved production to Singapore, China, Thailand, and in the 1990s, Mexico; this let them produce lower quality phones at lower prices. 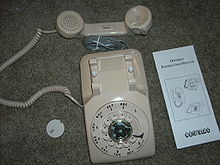 Beginning in the early 1950s, 500-style phones were also made under license by ITT Kellogg (now Cortelco), who continued manufacturing the original rotary design, marketed as the Cortelco ITT-500AS (desk phone) and Cortelco ITT-554AS (wall phone), until discontinuation on January 1, 2007. The design was also produced in Canada by Northern Electric (which eventually became Northern Telecom). Cortelco continues to produce a non dial version of the model 500, known as the Model 89001047PAK, this phone is only available in bright red. Stromberg-Carlson (now part of Siemens) also made the phones from the 1950s-1980s.

Some contemporary replicas of the 500 model are available. While faithful from a cosmetic point of view they are internally very different from the original, including a rotating tone dialer based on optical technology.

The Model 500 series, and its distinctive ring, are near-ubiquitous in late 20th-century U.S. and Canadian film and television.