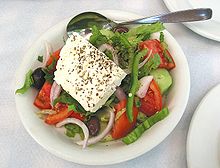 Greek cuisine (Greek: ελληνική κουζίνα) is a Mediterranean cuisine,[1] sharing characteristics with the cuisines of Italy, the Balkans, Turkey, and the Levant. Contemporary Greek cookery makes wide use of olive oil, vegetables and herbs, grains and bread, wine, fish, and various meats, including poultry, rabbit and pork. Also important are olives, cheese, eggplant (aubergine), courgette, and yoghurt. Greek desserts are characterized by the dominant use of nuts and honey. Some dishes use filo pastry.

Mezés (μεζές) is a collective name for a variety of small dishes, typically served with wines or anise-flavored liqueurs as ouzo or homemade tsipouro. Orektika is the formal name for appetizers and is often used as a reference to eating a first course of a cuisine other than Greek cuisine. Dips are served with bread loaf or pita bread. In some regions, dried bread (paximadhi) is softened in water. 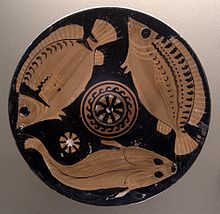 Fresh fish, one of the favourite dishes of the Greeks; platter with red figures, c.350–325 BC, Louvre.

Greek cuisine has a long tradition and its flavours change with the season and its geography.[2] Greek cookery, historically a forerunner of Western cuisine, spread its culinary influence - via ancient Rome - throughout Europe and beyond.[3] It has influences from the different people's cuisine the Greeks have interacted with over the centuries, as evidenced by several types of sweets and cooked foods.

It was Archestratos in 320 B.C. who wrote the first cookbook in history. Greece has a culinary tradition of some 4,000 years.[4] Ancient Greek cuisine was characterized by its frugality and was founded on the "Mediterranean triad": wheat, olive oil, and wine, with meat being rarely eaten and fish being more common.[5] This trend in Greek diet continued in Roman and Ottoman times and changed only fairly recently when technological progress has made meat more available. Wine and olive oil have always been a central part of it and the spread of grapes and olive trees in the Mediterranean and further afield is not uncorrelated with Greek colonization.[6][7]

The Byzantine cuisine was similar to the classical cuisine including however new ingredients that were not available before, like caviar, nutmeg and lemons, with fish continuing to be an integral part of the diet. Culinary advice was influenced by the theory of humors, first put forth by the ancient Greek doctor Claudius Aelius Galenus.[8] Byzantine cuisine benefited from Constantinople’s position as a global hub of the spice trade.[9] 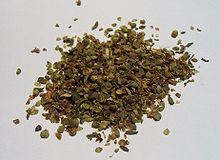 Dried oregano for culinary use.

The most characteristic and ancient element of Greek cuisine is olive oil, which is frequently used in most dishes. It is produced from the olive trees prominent throughout the region, and adds to the distinctive taste of Greek food. The basic grain in Greece is wheat, though barley is also grown. Important vegetables include tomato, aubergine (eggplant), potato, green beans, okra, green peppers, and onions. Honey in Greece is mainly honey from the nectar of fruit trees and citrus trees: lemon, orange, bigarade (bitter orange) trees, thyme honey, and pine honey from conifer trees. Mastic (aromatic, ivory coloured resin) is grown on the Aegean island of Chios.

Greek cuisine uses some flavorings more often than other Mediterranean cuisines do, namely: oregano, mint, garlic, onion, dill and bay laurel leaves. Other common herbs and spices include basil, thyme and fennel seed. Persillade is also used as a garnish on some dishes. Many Greek recipes, especially in the northern parts of the country, use "sweet" spices in combination with meat, for example cinnamon and cloves in stews.

The climate and terrain has tended to favour the breeding of goats and sheep over cattle, and thus beef dishes are uncommon. Fish dishes are common in coastal regions and on the islands. A great variety of cheese types are used in Greek cuisine, including Feta, Kasseri, Kefalotyri, Graviera, Anthotyros, Manouri, Metsovone and Mizithra.

Too much refinement is generally considered to be against the hearty spirit of the Greek cuisine, though recent trends among Greek culinary circles tend to favour a somewhat more refined approach.

Dining out is common in Greece, and has been for quite some time. The Taverna and Estiatorio are widespread, serving traditional Greek home cooking at affordable prices to both locals and tourists. Recently, fast-food has also become more popular in Greece and Europe, with local chains such as Goody's springing up, but the McDonald's have mainly closed down. Although fast food is gaining popularity and many major fast-food chains have opened all over Greece, the Greek people still rely primarily on the rich and extensive repertoire of Greek cuisine. In addition, some traditional Greek foods, especially souvlaki, gyros, pita such as tyropita and spanakopita (respectively, cheese and spinach pie) are often served in fast food style. 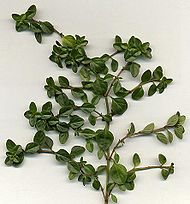 Thyme, one of the most traditional Greek herbs, was mentioned in the Odyssey.

Greece has an ancient culinary tradition dating back several millennia, and over the centuries Greek cuisine has evolved and absorbed numerous influences and influenced many cuisines itself.

Some dishes can be traced back to ancient Greece: lentil soup, fasolada, retsina (white or rosé wine flavored with pine resin) and pasteli (candy bar with sesame seeds baked with honey);[10] some to the Hellenistic and Roman periods: loukaniko (dried pork sausage); and Byzantium: feta cheese, avgotaraho (cured fish roe) and paximadi (traditional hard bread baked from corn, barley and rye). There are also many ancient and Byzantine dishes which are no longer consumed: porridge as the main staple, fish sauce, and salt water mixed into wine.

Many dishes are part of the larger tradition of Ottoman cuisine and their names reveal Arabic, Persian or Turkish roots: moussaka, tzatziki, yuvarlakia, keftethes, boureki, and so on. Many dishes' names probably entered the Greek vocabulary during Ottoman times, or earlier in contact with the Persians and the Arabs. Some dishes may be pre-Ottoman, only taking Turkish names later; Ash and Dalby, for example, speculate that grape-leaf dolmathes were made by the early Byzantine period.[11][12] 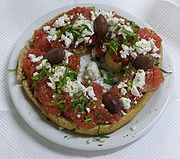 Distinct from the main stream regional cuisines are:

Greek cuisine is very diverse and although there are many common characteristics amongst the culinary traditions of different regions within the country, there are also many differences, making it difficult to present a full list of representative dishes. For example, the vegetarian dish " Chaniotiko Boureki" (oven baked slices of potatoes with zucchini, myzithra cheese and mint) is a typical dish in western Crete, in the region of Chania. A family in Chania may consume this dish 1-2 times per week in the summer season. However, it is not cooked in any other region of Greece. Many food items are wrapped in Filo pastry, either in bite-size triangles or in large sheets: kotopita (chicken), spanakotyropita (spinach and cheese), chortopita (greens), kreatopita (meat pie, using minced meat), etc.

The list will present some of the most representative Greek dishes that can be found throughout the country and the most famous of the local ones:

An example of pikilía (variety) platter.

Kolokythoanthoi are often served with a dollop of Greek yogurt on the side.

Meze (appetizer; plural mezedes) is served in restaurants called mezedopoleía, served to complement drinks, and in similar establishments known as tsipourádika or ouzerí (a type of café that serves drinks such as ouzo or tsipouro). A tavérna (tavern) or estiatório (restaurant) also offers a meze as an orektikó (appetiser). Many restaurants offer their house pikilía (variety) a platter with a smorgasbord of various mezedes that can be served immediately to customers looking for a quick or light meal. Hosts commonly serve mezedes to their guests at informal or impromptu get-togethers as they are easy to prepare on short notice. Krasomezédhes (literally "wine-meze") are mezedes that go well with wine; ouzomezédhes are mezedes that go with ouzo. 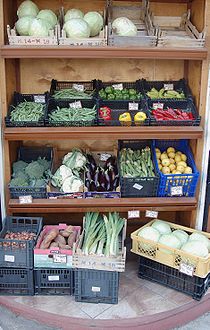 Very popular during fasting periods, such as the Great Lent: 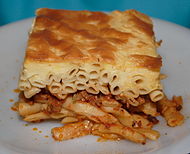 Pastitsio, an example of culinary influence from Italy (Venetian cuisine).

Diples made on an iron mould dipped in batter and cooked in cooking oil.

There is a wide variety of cheeses made in various regions across Greece. The vast majority of them remain unknown outside the Greek borders due to the lack of knowledge and the highly localized distinctive features. Many artisanal, hand made cheeses, both common varieties and local specialties, are produced by small family farms throughout Greece and offer distinct flavors atypical of the mass produced varieties found commercially in Greece and abroad. A good list of some of the varieties of cheese produced and consumed in Greece can be found here. These are some of the more popular throughout Greece: