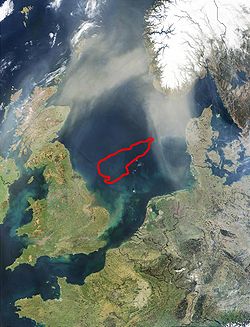 Location of the Dogger Bank

Geologically, the feature is most likely a moraine, formed during the Pleistocene.[1] At differing times during the last ice age it was land joined to the mainland, or an island. Fishing trawlers working the area have dredged up large amounts of moor peat, remains of mammoth and rhinoceros, and occasionally Paleolithic hunting artefacts. The bank was part of a large landmass, known as Doggerland, which connected Britain to the European mainland until it was flooded at the end of the last ice age.[2]

In 1931, the largest earthquake ever recorded in the United Kingdom took place below the bank, measuring 6.1 on the Richter scale. Its focus was 23 km beneath the bank, and the quake was felt in countries all around the North Sea, causing damage across eastern England.

The bank has been the site of several naval actions. During the War of American Independence, a Royal Navy squadron fought a Dutch squadron on August 5, 1781 in the Battle of Dogger Bank. During the Russo-Japanese War, Russian naval ships opened fire on British fishing boats in the Dogger Bank incident on October 21, 1904, mistaking them for Japanese torpedo boats. In the First World War, the area saw battles in 1915 and 1916 between the Royal Navy and the German High Seas Fleet. In 1966, the German submarine U-Hai sank during a gale, and is one of the worst peacetime naval disasters in German history.

The bank is an important fishing area, with cod and herring being caught in large numbers. It gives its name to the Dogger region used in the BBC Radio 4 Shipping Forecast. Several shipwrecks lie on the bank.

Dogger Bank has been identified as an oceanic environment that exhibits high primary productivity throughout the year in the form of phytoplankton. As such, it has been proposed by various groups to make the area a designated Marine Nature Reserve.[3]

In January 2010, a licence to develop a wind farm in Dogger Bank was granted to a consortium of developers. The wind farm is projected to develop up to 9 gigawatts of power, as part of a planned nine zone project of 32 gigawatts. Construction is scheduled to start around 2014 at the earliest. [4]