The use of a magnetic core can enormously concentrate the strength and increase the effect of magnetic fields produced by electric currents and permanent magnets. The properties of a device will depend crucially on the following factors:

In many applications it is undesirable for the core to retain magnetization when the applied field is removed. This property, called hysteresis can cause energy losses in applications such as transformers. Therefore 'soft' magnetic materials with low hysteresis, such as silicon steel, rather than the 'hard' magnetic materials used for permanent magnets, are usually used in cores.

A coil not containing a magnetic core is called an air core coil. This includes coils wound on a plastic or ceramic form in addition to those made of stiff wire that are self-supporting and have air inside them. Air core coils generally have a much lower inductance than similarly sized ferromagnetic core coils, but are used in radio frequency circuits to prevent energy losses called core losses that occur in magnetic cores. The absence of normal core losses permits a higher Q factor, so air core coils are used in high frequency resonant circuits, such as up to a few megahertz. However, losses such as proximity effect and dielectric losses are still present. 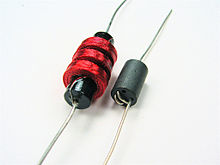 Most commonly made of ferrite or a similar material, and used in radios especially for tuning an inductor. The rod sits in the middle of the coil and small adjustments of the rod's position will fine tune the inductance. Often the rod is threaded to allow adjustment with a screwdriver. In radio circuits, a blob of wax or resin is used once the inductor has been tuned to prevent the core from moving.

The presence of the high permeability core increases the inductance but the field must still spread into the air at the ends of the rod. The path through the air ensures that the inductor remains linear. In this type of inductor radiation occurs at the end of the rod and electromagnetic interference may be a problem in some circumstances.

Like a cylindrical rod but square, rarely used on its own. This type of core is most likely to be found in car ignition coils.

U and C-shaped cores are used with I or another C or U core to make a square closed core, the simplest closed core shape. Windings may be put on one or both legs of the core.

E-shaped core are more symmetric solutions to form a closed magnetic system. Most of the time, the electric circuit is wound around the center leg, whose section area is twice that of each individual outer leg.

Sheets of suitable iron stamped out in shapes like the (sans-serif) letters "E" and "I", are stacked with the "I" against the open end of the "E" to form a 3-legged structure. Coils can be wound around any leg, but usually the center leg is used. This type of core is much used for power transformers, autotransformers, and inductors. 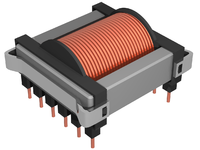 Construction of an inductor using two ER cores, a plastic bobbin and two clips. The bobbin has pins to be soldered to a printed circuit board. 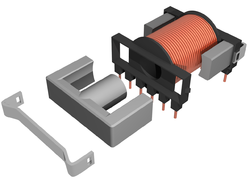 Exploded view of the previous figure showing the structure

Again used for iron cores. Similar to using an "E" and "I" together, a pair of "E" cores will accommodate a larger coil former and can produce a larger inductor or transformer. If an air gap is required, the centre leg of the "E" is shortened so that the air gap sits in the middle of the coil to minimise fringing and reduce electromagnetic interference.

Usually ferrite or similar. This is used for inductors and transformers. The shape of a pot core is round with an internal hollow that almost completely encloses the coil. Usually a pot core is made in two halves which fit together around a coil former (bobbin). This design of core has a shielding effect, preventing radiation and reducing electromagnetic interference.

This design is based on a toroid (the same shape as a doughnut). The coil is wound through the hole in the torus and around the outside. An ideal coil is distributed evenly all around the circumference of the torus. The symmetry of this geometry creates a magnetic field of circular loops inside the core, and the lack of sharp bends will constrain virtually all of the field to the core material. This not only makes a highly efficient transformer, but also reduces the electromagnetic interference radiated by the coil.

It is popular for applications where the desirable features are: high specific power per mass and volume, low mains hum, and minimal electromagnetic interference. One such application is the power supply for a hi-fi audio amplifier. The main drawback that limits their use for general purpose applications, is the inherent difficulty of winding wire through the center of a torus.

Unlike a split core (a core made of two elements, like a pair of E cores), specialized machinery is required for automated winding of a toroidal core. Toroids have less audible noise, such as mains hum, because the magnetic forces do not exert bending moment on the core. The core is only in compression or tension, and the circular shape is more stable mechanically. 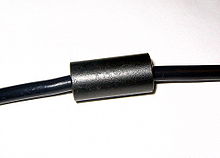 A ferrite ring on a computer data cable.

The ring is essentially identical in shape and performance to the toroid, except that inductors commonly pass only through the center of the core, without wrapping around the core multiple times.

The ring core may also be composed of two separate C-shaped hemispheres secured together within a plastic shell, permitting it to be placed on finished cables with large connectors already installed, that would prevent threading the cable through the small inner diameter of a solid ring.

A planar core consists of two flat pieces of magnetic material, one above and one below the coil. It is typically used with a flat coil that is part of a printed circuit board. This design is excellent for mass production and allows a high power, small volume transformer to be constructed for low cost. It is not as ideal as either a pot core or toroidal core[citation needed] but costs less to produce. 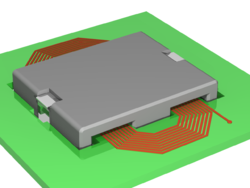 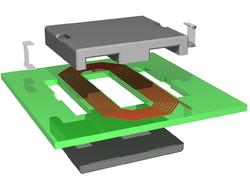 In a transformer or inductor, some of the power that would ideally be transferred through the device is lost in the core, resulting in heat and sometimes noise. There are various reasons for such losses, the primary ones being:

When the magnetic field through the core changes, the magnetization of the core material changes by expansion and contraction of the tiny magnetic domains it is composed of, due to movement of the domain walls. This is a lossy process, because the domain walls get "snagged" on defects in the crystal structure and then "snap" past them, dissipating energy as heat. This is called hysteresis loss. It can be seen in the graph of the B field versus the H field for the material, which has the form of a closed loop. The amount of energy lost in the material in one cycle of the applied field is proportional to the area inside the hysteresis loop. Hysteresis loss increases with higher frequencies as more cycles are undergone per unit time.

"Soft" iron is used in magnetic assemblies, electromagnets and in some electric motors; and it can create a concentrated field that is as much as 50,000 times more intense than an air core.[1]

Iron is desirable to make magnetic cores, as it can withstand high levels of magnetic field without saturating (up to 2.16 teslas at ambient temperature.[2])

It is also used because, unlike "hard" iron, it does not remain magnetised when the field is removed, which is often important in applications where the magnetic field is required to be repeatedly switched.

Unfortunately, due to the electrical conductivity of the metal, at AC frequencies a bulk block or rod of soft iron can often suffer from large eddy currents circulating within it that waste energy and cause undesirable heating of the iron.

Because iron is a relatively good conductor, it cannot be used in bulk form with a rapidly changing field, such as in a transformer, as intense eddy currents would appear due to the magnetic field, resulting in huge losses (this is used in induction heating).

Two techniques are commonly used together to increase the resistivity of iron: lamination and alloying of the iron with silicon. 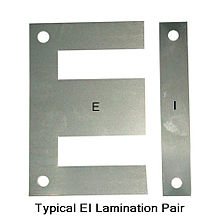 Laminated magnetic cores are made of thin, insulated iron sheets, lying, as much as possible, parallel with the lines of flux. Using this technique, the magnetic core is equivalent to many individual magnetic circuits, each one receiving only a small fraction of the magnetic flux (because their section is a fraction of the whole core section). Because eddy currents flow around lines of flux, the laminations prevent most of the eddy currents from flowing at all, restricting any flow to much smaller, thinner and thus higher resistance regions. From this, it can be seen that the thinner the laminations, the lower the eddy currents.

A small addition of silicon to iron (around 3%) results in a dramatic increase of the resistivity, up to four times higher[citation needed]. Further increase in silicon concentration impairs the steel's mechanical properties, causing difficulties for rolling due to brittleness.

Among the two types of silicon steel, grain-oriented (GO) and grain non-oriented (GNO), GO is most desirable for magnetic cores. It is anisotropic, offering better magnetic properties than GNO in one direction. As the magnetic field in inductor and transformer cores is static (compared to that in electric motors), it is possible to use GO steel in the preferred orientation.

Powdered cores made of carbonyl iron, a highly pure iron, have high stability of parameters across a wide range of temperatures and magnetic flux levels, with excellent Q factors between 50 kHz and 200 MHz. Carbonyl iron powders are basically constituted of micrometer-size spheres of iron coated in a thin layer of electrical insulation. This is equivalent to a microscopic laminated magnetic circuit (see silicon steel, above), hence reducing the eddy currents, particularly at very high frequencies.

A popular application of carbonyl iron-based magnetic cores is in high-frequency and broadband inductors and transformers.

Powdered cores made of hydrogen reduced iron have higher permeability but lower Q. They are used mostly for electromagnetic interference filters and low-frequency chokes, mainly in switched-mode power supplies.

Ferrite ceramics are used for high-frequency applications. The ferrite materials can be engineered with a wide range of parameters. As ceramics, they are essentially insulators, which prevents eddy currents, although losses such as hysteresis losses can still occur.

Amorphous metal is a variety of alloys that are non-crystalline or glassy. These are being used to create high efficiency transformers. The materials can be highly responsive to magnetic fields for low hysteresis losses and they can also have lower conductivity to reduce eddy current losses. China is currently making wide spread industrial and power grid usage of these transformers for new installations.