The Politecnico di Milano is the largest technical university in Italy, with about 35,000 students. The rector of the university is professor Giovanni Azzone. In 2011 the university was ranked as the 48th technical university in the world, in the THE-QS World University Rankings[1]. This was a 9-positions growth from the 57th position in 2009, and a 15-position growth since the 63rd position in 2008. In 2009 an Italian research ranked it as the best in Italy over indicators such as scientific production, attraction of foreign students, and others.[2]

There are three Politecnici (Technical Universities, where only engineering and architecture are taught) in Italy (Milan, Turin and Bari).

The logo of Politecnico di Milano is a sketch of Raphael's School of Athens, an affresco which is located in the Vatican Museum, Vatican City. 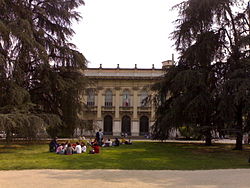 Façade of the main seat of the Politecnico

Founded on November 29, 1863, Politecnico di Milano is the oldest university in Milan. The original name was Istituto Tecnico Superiore ("Higher Technical Institute"), Francesco Brioschi the leader, and the location was in the very heart of the city ('via Senato').

Architecture, the second main line of study at Politecnico, was introduced in 1865. In 1927 the Politecnico moved to piazza Leonardo da Vinci, in the district now known as Città studi (City of Studies). Politecnico's main facilities are still there today. At the time, it was named Regio Politecnico ("Royal Polytechnic"). The word Regio was removed as Italy was proclaimed a republic at the end of World War II.

In 1954, the first European centre of electronic computation was opened in Politecnico by Gino Cassinis and Ercole Bottani. In 1963 Giulio Natta received the Nobel Prize in Chemistry for his research on crystalline polymers, polypropylene in particular. In 1977, the satellite Sirio, jointly developed by Politecnico and other companies, was launched.

Since the end of the 1980s, the Politecnico has begun a process of territorial expansion that would have resulted in the opening of its satellite campuses in Lombardy and Emilia Romagna. A university programme in industrial design was started in 1993. In 2000, the politecnico's faculty of design was created with new courses in undergraduate and postgraduate programs of graphic & visual, fashion and interior design along with the already existent industrial design.

The University is distributed over 7 main campuses across Lombardy and Emilia Romagna:

The admission in the undergraduate programme in the Politecnico is bound to an admission test, aimed to verify the starting preparation of every student. The main goal of this test is to point out the lacks of the aspiring students and, in case, to assign them an extra course. Only some programmes have a strictly limited number of places, even if the Academic Senate fixes an approximate maximum number of students for every programme.

The admission test for Architecture, Design and Construction Engineering schools is divided in five parts, each about one of the following general subject: Logic and General Knowledge; History; Drawing and Representation; Mathematics and Physics. The test is administered by the Ministry of Education.

The admission test for any Engineering school, except Construction Engineering, is divided in four parts, each about one of the following general subject: English Language; Logic, Mathematics and Statistics; Verbal Comprehension; Physics.

The Politecnico also offers courses of study for the title of Dottore di Ricerca (Ph.D.), MBA courses, and other postgraduate courses.

The Politecnico offers 32 first level (Bachelor) degree programmes. Among these, there is an on-line course in Computer Engineering,[4] the first on-line academic course in Italy. It is fully equivalent to the traditional Computer Engineering programme; in fact all the lessons are explained on the web by the professors of the Politecnico and the final examinations are taken in the campus in Como.

This wide range of different curricula is tailored to the needs of its territory (the Lombardy region), which is one of the most developed industrial areas in Europe. The number of students enrolled is approximately 35,000, making the Politecnico di Milano the largest institution in Italy for Engineering, Architecture and Industrial Design.

Programmes at the Politecnico frequently feature additional parts of practical homework. This is believed to strengthen the knowledge, expertise and ability of students.

Politecnico maintains several relationships with international projects for student exchange,[5] and encourages the enrollment of foreign students by providing many courses in English language.[6] It participates in the ENTREE network for student exchange among Electrical Engineering colleges in Europe. It is also a member of Top Industrial Managers for Europe (TIME) network. It contributes to IMCC organisation.

The Alta Scuola Politecnica joint institution of Politecnico di Milano and Politecnico di Torino, is addressed to young talents who want to develop their interdisciplinary capabilities for leading and promoting innovation, and runs in parallel to the two-year programmes of laurea magistrale.

The library system of the Politecnico counts more than 470.000 records distributed all over the libraries in the campuses.[7] The system is made up of Central Libraries (amongst which the most important ones are the 'Central Engineering Library' and the 'Central Architecture Library') and Teaching Libraries, set up to help students preparing their exams. The titles registered in the library system can be consulted through a web search engine called OPAC (Online Public Access Catalogue).[8]

Many scientists working at the Politecnico di Milano have received awards and recognition by the scientific community: among them, the most famous is undoubtedly Giulio Natta, the only Italian Nobel laureate for Chemistry to date (1963), who was also the head of the Department of Industrial Chemistry at Politecnico. As of 2005, a number of professors at Politecnico are ACM or IEEE fellows.

The Politecnico participates in associations and consortia for applied research, has offices to assist technological transfers and continuing education for professionals. The university supports the establishment of research spin-offs, and also of high-tech companies during their start-up phase, with a structure named Acceleratore d'Impresa (Start-up Incubator).[12]

Student fees at the Politecnico depend on the income of the family of the student. They range between 150 €/year and 3000 €/year. Students with good grades are granted partial or full rebates, in addition to various kinds of scholarships.[13] There are many scholarships for international students as part of its recent internationalization program.

Most Italian universities do not offer accommodation for their students on campus. Politecnico has a limited number of at most 1000 beds (also counting agreements with private institutions), and directly manages a 140-bed hostel for exchange students of the Erasmus programme. Most students from outside the city are either commuters or renting. It is customary for students to share flats in small groups of 3 or 4 people, as rent rates are very expensive in the city.

The campuses Leonardo and Bovisa are covered by a Wi-Fi network. Politecnico's Wi-Fi system is composed by two networks: a non-protected net (SSID: polimi) and a protected one (SSID: internet). With polimi, students can freely log into a stripped-down network, getting the access to an institutional website where they can request a certificate to access the internet network. In fact, the access to the latter is regulated by the WPA protocol, using an EAP authentication and TKIP cryptography. The internet network grants access to all of Politecnico's private network (all the LANs of all campuses), and to the Internet in limited form (the HTTP(S) and FTP services only). The WiFi service is still work in progress but most areas of the campus Leonardo are now covered by it.[14]

An interesting part of student life are "copy centers". During the 1970s, two copy centers were born: CLUP and CUSL (the former from left-wing student groups, the latter with a Catholic, conservative student base), as an effort from students to solve their own problems (such as the cost of books and sharing of lecture notes). They have been the only copy centres within Politecnico's premises for a long time, until 2001 when CLUP moved just outside it. They are important just for historical and political reasons, as nowadays there are plenty of alternative facilities in Politecnico's district, Città Studi.

A well known structure is the ISU[15] (a generic term which in Italian university describes additional student facilities such as open libraries, lending of portable PCs, cafeterias and study spaces), dedicated to Luigi Divieti. A legend talks of the "Pianist of ISU", a man who is supposed to be living there since he was born some 50 years ago, and to be a hopelessly old student of the university.

Inside the Leonardo campus students can find the seat of the Educafe.[16] Educafe has been conceived as an innovative space inside the Politecnico, where students can meet up or freely surf the net. Educafe, despite its very limited size, is also a meeting center, where cultural events are organized every months.

Among the student organizations:

Politecnico Di Milano is a well known university in Europe. The last survey of graduates shows that 80% of graduates of the Politecnico di Milano finds a job within three months from graduation, and almost 95% within six months.[17] The figures are similar for the bachelor and the masters level graduates. A specialized "Career Service"[18] facilitates contacts between graduates and the industry, it invites companies for presentations and prepares statistics about the graduated students. It posts almost 200 job offers per month and arranges 90 recruitment events per year (which mostly consist of company presentations with arranged interviews).

Currently, the three main political groups in student's elections are:

Other smaller groups (both right-wing) are:

Participation in student elections is, however, generally low, typically below 15%, as a result of generally a low interest in the issues and the low influence of elected students on the academy's decisions.[19]