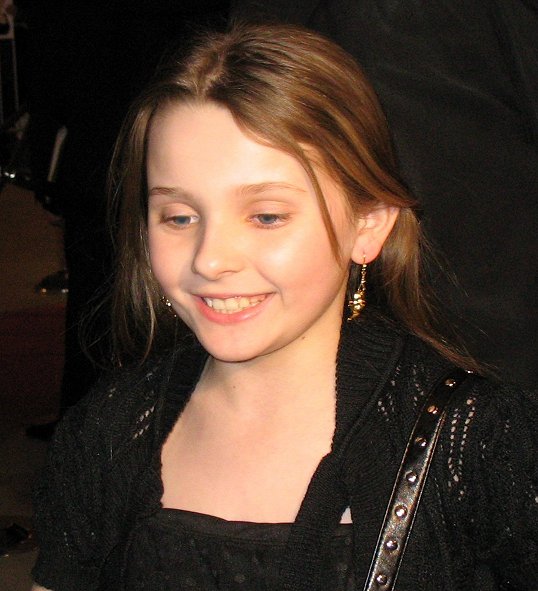 Abigail Ashley Breslin (born , ) is an Academy-Award nominated American child actress. The fourth youngest actress ever to be nominated for a competitive , Breslin is known for her role in the film "" and Nim in Nim's Island alongside Jodie Foster, Kit Kittredge: An American Girl as well as for several supporting parts in other films.

Breslin was born in , , the daughter of Kim, who manages Abigail's career, and Michael Breslin, a telecommunications expert, computer programmer and consultant.

Prior to her star-making turn in "Sunshine", Breslin appeared in the films "Signs" (2002), "" (in which Breslin and her brother Spencer played siblings), "" (which Spencer also appeared in), "Keane", "Chestnut: Hero of Central Park", and "". In 2006, Breslin starred in the comedy "", playing a beauty pageant contestant, the youngest in a dysfunctional family on a . Her co-stars, and , both mentioned that they were "astounded by her seriousness of purpose during shooting".

Although Breslin did not win the Oscar, she co-presented with at the on , . Breslin was part of the Disney Year of a Million Dreams celebration. photographed her as Fira from Disney Fairies with as the Blue Fairy from Pinocchio. On , , Breslin made her stage debut in the play "Right You Are (If You Think You Are)" in New York City at the Guggenheim Museum starring in an ensemble cast alongside , , and . [ [http://www.junior . m/abigail-breslin-in-nyc/ Abigail Breslin in New York] Junior Celebs] In 2007, Breslin was ranked #8 in Magazine's list of "Young Hollywood's Top-Earning Stars", having earned $1.5 million in 2006.

Breslin next appeared in the romantic comedies "No Reservations", playing the niece of a , and "", in which her character is the daughter of a recently-divorced father ().