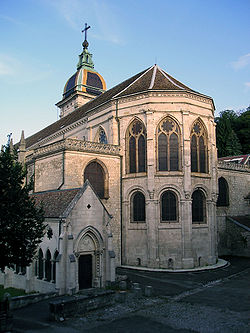 Early history of the diocese 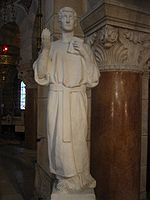 Local tradition states that the diocese was evangelized by Saints Ferreolus and Ferrutio (Ferréol and Ferjeux),[2] who were sent here by St. Irenaeus, Bishop of Lyon. According to the Catholic Encyclopedia, "Louis Duchesne proved that these legends belong to a chain of narratives forged in the first half of the 6th century and of which the "passion" of St. Benignus of Dijon was the initial link.").[2]

The Abbey of Lure (at Lure, Haute-Saône) was founded at the beginning of the 7th century by St. Déicole (Deicolus), or Desle, disciple of St. Columbanus; later its abbots were princes of the Holy Empire. The Abbey of Beaume les Dames, founded in the 5th century and in which Gontram, King of Burgundy, was buried, was the school where St. Odo, afterwards Abbot of Cluny, studied in the tenth century; at the end of the eighth century there was built near it an abbey for Benedictine nuns, members of the nobility. During the French Revolution, the superb church of this abbey was laid waste. Other saints of the Diocese of Besançon include the hermit St. Aldegrin (10th century).

During the Middle Ages several popes visited Besançon, among them pope Leo IX who consecrated the altar of the old Cathedral of St. Etienne in 1050, and Eugenius III, who in 1148 consecrated the church of St. Jean, the new cathedral. A council was held at Besançon in 1162, presided over by Holy Roman Emperor Frederick Barbarossa, in the interest of the Antipope Victor IV against Pope Alexander III. Guido of Burgundy who was pope from 1119 to 1123 under the name of Calixtus II, and the Jesuit Claude-Adrien Nonnotte (1711–1793), an adversary of Voltaire, were natives of Besançon.

St. Peter Fourier (1565–1640), who inaugurated systematic education for girls, was born in the diocese. The miracle attributed to the "Sacred Host of Faverney," during a fire in the year 1608, was annually commemorated by elaborate ceremonies. The places of pilgrimage were Notre Dame du Chêne at Scey; Notre Dame d'Aigremont; the pilgrimage of St. Pierre of Tarentaise at Cirey-les-Bellevaux, where St. Pierre de Tarentaise died in 1174; Notre Dame des Jacobins at Besançon; and Notre Dame de la Motte at Vesoul.

Few 19th-century dioceses have undergone similar territorial changes. The Concordat of 1802 gave the Diocese of Besançon all those districts which, in 1822, constituted the Diocese of St.-Claude. In 1806, Besançon was given jurisdiction over the three parishes of the Principality of Neufchâtel (Switzerland) which fell under the control of the bishopric of Lausanne in 1814. In 1870, after the annexation of Alsace-Lorraine by Germany, the district of Belfort was withdrawn from the bishopric of Strasburg and attached to the dicoese of Besançon.

The metropolitan jurisdiction of Besançon also underwent changes. In 1802 its suffragans were the Bishoprics of Dijon and Autun (in Burgundy), Metz, Nancy and Strasbourg (in Alsace-Lorraine). Under the Bourbon Restoration, Dijon and Autun were withdrawn from Besançon, which became the metropolitan of the sees of Saint-Dié, Verdun and Belley. In 1874, after the Franco-Prussian War, the churches of Metz and Strasburg were exempt, under the direct control of the Holy See.

On November 3, 1979, Belfort, Montbéliard, and the canton of Héricourt (Haute-Saône) were detached from the diocese of Besançon and constituted into a new autonomous diocese, that of Belfort-Montbéliard.[3] 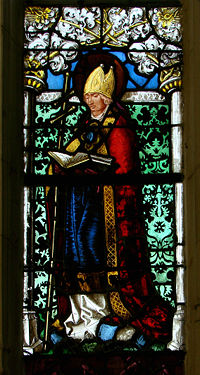 Saint Claudius served as bishop of Besançon during the 7th century.

According to the Catholic Encyclopedia, "the catalogue of the earliest bishops of Besançon is to be read with caution."[2]