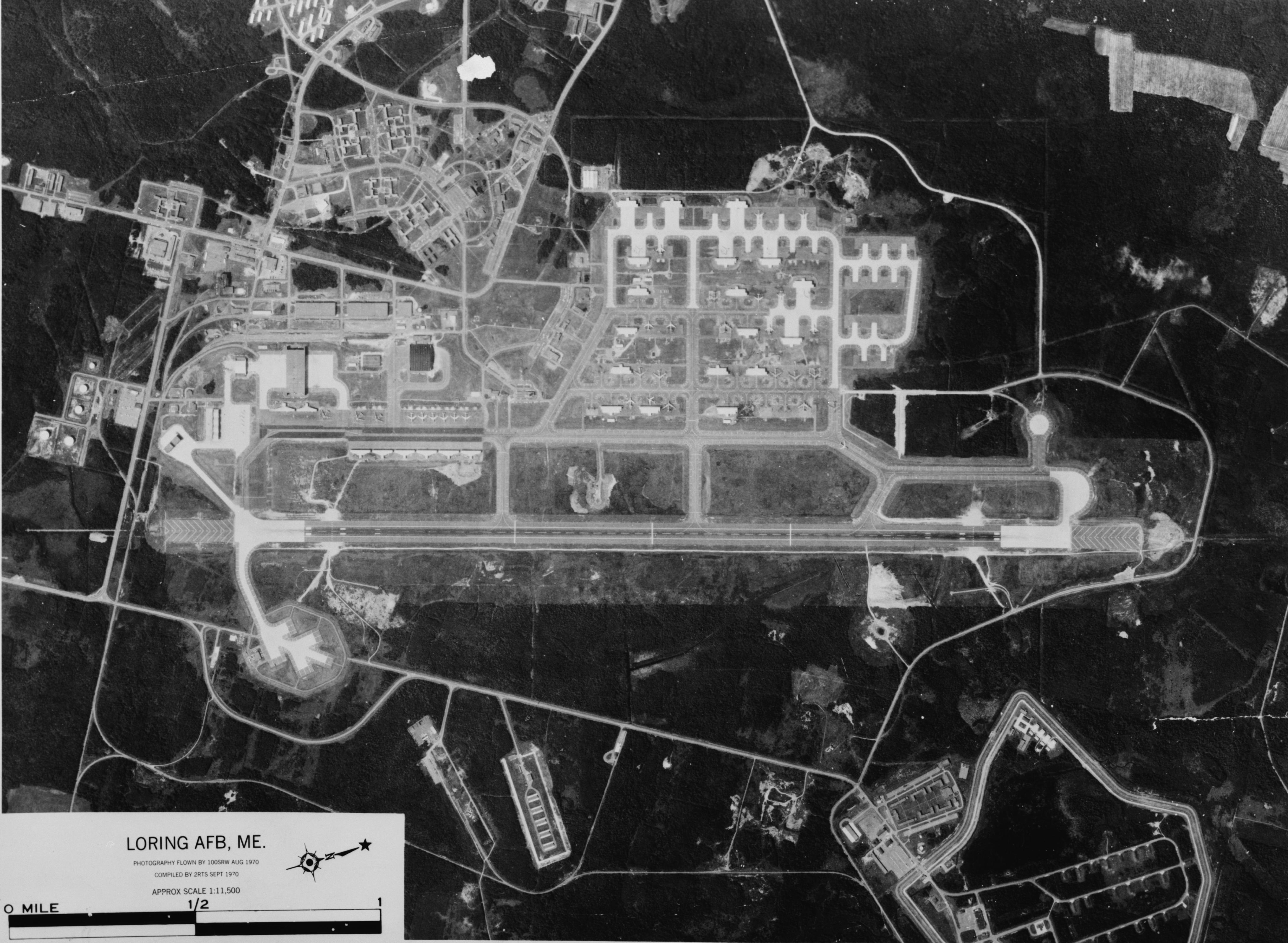 Loring Air Force Base is a former base that was under the operational control of the (SAC) for most of its existence. In 1992, it was transferred to the newly-established , and it was finally closed as an active Air Force installation in 1994. Loring is located in Limestone, . It is treated for statistical purposes by the as a . At the 2000 census, the base had a total population of 225. It was named for Major , , a recipient during the .

Loring AFB was carved out of the woods of Maine in 1953. It was named after , who was killed in the . Along with the nearby , some of its roads were named after states in the Union. It was the closest Air Force base on the east coast to Europe. It was originally built with a capacity of 100 bombers.

The Nuclear Weapons Storage Area at Loring once operated as a separate, top secret facility. Originally called Caribou Air Force Station, the remote area to the northeast of Loring’s property was the first U.S. site specifically constructed for the storage, assembly, and testing of atomic weapons.

A parallel ribbon of four fences, one of which was electrified, surrounded the heart of the storage area. This area was nicknamed the “Q” area, which denoted the Department of Energy’s "Q" level security clearance required to enter.

In June 1962, the Atomic Energy Commission released its custody and ownership of the weapons to the Air Force. The personnel and property of Caribou Air Force Station were absorbed into that of the adjacent Loring Air Force Base.

On the nights of October 28th and 29th in 1975, there were two sightings of unidentified helicopters breaching the base perimeter in the area of the WSA just north of Loring AFB. One of the helicopters reported landed within the weapons storage area. [http://www.dod.mil/pubs/foi/ufo/assort1.pdf]

Loring AFB was first targeted for closure in 1976. The Air Force's primary rationale at that time was the poor condition of Loring AFB's facilities. In 1976, it was estimated that Loring AFB needed up to $300 million in facilities improvements. Between 1976 and 1979, considerable debate took place over the strategic importance of Loring AFB, resulting in a reversal of the Air Force decision to close the base. When the decision to keep Loring AFB open was made in 1979, Congress committed itself to upgrading the base facilities. Since 1981, nearly $300 million in military construction and operations and maintenance funds were spent to upgrade the facilities.

In 1991, the Secretary of Defense, upon the recommendation of the Secretary of the Air Force, identified six Strategic Air Command bases for closure. Loring Air Force Base was one of the six bases on the closure list.

The official base closure date was September 30, 1994.

*Contained convert|14300|acre|km2, making it the biggest SAC base in the country
*2 runways, only two other SAC bases had two runways
*The largest capacity for weapon storage and for fuel storage in all of SAC (Its overall capacity ranked second among all 21 SAC bases)
**Weapons storage capacity was 10,247,882 NEW (Net Explosive Weight) (the highest in all of SAC)
**1st in all of SAC in fuel storage capacity (9,193,374 gallons)
*Ramp space exceeds 1.1 million square yards. (2nd among all SAC bases in total ramp space, 1st in excess ramp space)
*One of two fully capable conventional weapons storage facilities in CONUS maintained by SAC.
*A small downhill ski area provided recreation for personnel and their dependents, operating on the base from the early 1960s until the base's closure in 1994. [ [http://www.nelsap.org/me/loring.html Loring AFB ] ]

Units Based at Loring

The convert|9472|acre|km2|sing=on base property is now administered by the Loring Development Authority of Maine. The base is now called the Loring Commerce Center and is marketed as an "aviation and industrial complex and business park".

Military Users to the old base include:
* DFAS Limestone, a major component of the office (BRAC 2005 consolidated 26 offices into 5 and this was one of the consolidation points
* Maine Military Authority, refurbishes s (HMMWV’s) for the US Army and Marine Corps

The airfield at Loring Commerce Center was used by the popular jam-band , to hold its massive festival concerts, "" in 1997, the in 1998 and "It" in 2003. Estimated attendance was 65,000 and 60,000 concert-goers respectively and Phish was the only band at both events. Fans camped on-site in tents, creating a community of fans that became the second largest city in Maine during both events. Phish is currently planning another festival at the base, name yet to be determined, to close out their upcoming Summer 2009 reunion tour.

There were 82 households out of which 53.7% had children under the age of 18 living with them, 54.9% were married couples living together, 11.0% had a female householder with no husband present, and 29.3% were non-families. 28.0% of all households were made up of individuals and 1.2% had someone living alone who was 65 years of age or older. The average household size was 2.74 and the average family size was 3.38.