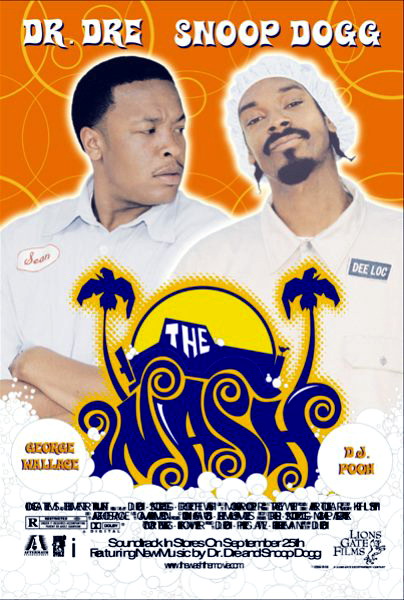 "The Wash" is a hip-hop-styled released on , featuring , , , and , with an appearance made by . This film was written and directed by DJ Pooh. The dialog is notable for a huge amount of ghetto talk, as well as the frequent use and sale of drugs on screen accurately depicting the way things are for an everyday carwash in the middle of , though the film never specifies exactly where in the Los Angeles area it takes place. Presumably, the setting is thought to be or one of the lower/lower-middle class incorporated cities in southern .

Sean () and Dee Loc () are roommates who have not yet paid their rent. To make matters worse, Sean just lost his job at , so Dee Loc suggests that his roommate stop by the same car wash where he works. Sean is immediately hired as assistant manager since Chris () had been fired the day before. At the same time, their landlord has given them a three-day eviction warning. Although Dee Loc has the money, through dealing drugs on the side, he refuses to pay, insisting that Sean needs to come up with his half, so Sean does his best to impress Mr. Washington (George Wallace), the owner of the car wash, so he can hold his job long enough to come up with his half of the rent.

At first, things go fine, but then Dee Loc is caught on tape stealing and Mr. Washington tells Sean he must decide what to do, including firing his roommate if that's the best 'executive decision' to make. Sean tries to appeal to Dee Loc to act more responsibly but this creates a tremendous strain in their relationship.

Then Mr. Washington is kidnapped at gunpoint by two inept and angry local thugs who are stupid enough to call the car wash with their demands unaware of caller ID, which of course reveals their location, but instead of calling the police, Sean and Dee Loc put aside their differences long enough to rescue their boss, otherwise Sean won't get paid and he won't be able to come up with his half of the rent.

The crisis worsens when the former assistant manager, Chris, suddenly shows up wanting revenge on Mr. Washington for firing him, which sets up the final confrontation between all parties concerned. Chris shoots one of the kidnappers and runs out of bullets, then Sean confronts Chris and they wrestle for the gun. Sean loses the battle and falls down and just when he was about to get shot Dee Loc hops in the way to defends his friend. But when Chris turns around he is confronted with a gun to his face just as the cops arrive. When all this is over Sean and Dee Loc walk off together as the credits roll.