Chameleon Jail (カメレオン ジェイル, Kamerion Jeiru?) is a manga series written by Kazuhiko Watanabe and illustrated by Takehiko Inoue, who is more well known for his subsequent manga, Slam Dunk. Chameleon Jail is Inoue's first manga series to be compiled in tankōbon form. It was first published in Shueisha's Weekly Shōnen Jump in Japan in 1989. The story centers around a "risk hunter" named Chameleon Jail, who thwarts and solves crimes by using a superhuman ability to change his appearance at will.

"Risk hunters" are professionals who handle jobs considered too tough for normal law enforcement, such as kidnappings, combatting terrorism, and preventing murders. One man who stands above them all however is the legendary Chameleon Jail, who has the ability to manipulate his "kara" or internal human body energy in order to physically change his appearance into that of any other person. Throughout the series, he pursues several assignments on behalf of various clients given to him by Shall, a woman who runs a detective agency in New York City. All difficult, the successful completion of these assignments hinges on Jail's ability to change his appearance when the time is right.

The protagonist and title character, Chameleon Jail or Jail as he more commonly goes by, is a Japanese risk hunter residing in New York City. In addition to manipulating his kara to alter his appearance, he can also channel it in order to literally change a target's sex from male to female. Part of his ability to manipulate his appearance also seems to entail being able to adopt the talents and skills practiced by those whom he imitates in order to further deceive his targets. However Jail can hold his own in most situations without resorting to using his kara manipulation, being a skilled fighter and marksman. Despite the high prices charged for his services, Jail has a sense of honor and a conscience. He also has goofy side and a weakness for food. He works between assignments as a sushi chef.

Shall is the female proprietor of a private detective agency in New York City who gives Jail his assignments and also assists him in completing them as best she can, functioning as his partner in a sense. She continuously promotes Jail as the best risk hunter in the business, and uses him once herself for an assignment. 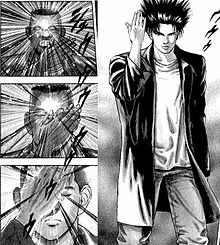 Chameleon Jail manipulates his "kara" to transform from a disguise he has assumed to his true self (right).

The following characters appear in story arcs more than one chapter long in Chameleon Jail.

Colonel Keith as he is known as is a former Delta Force officer who is dying from a heart condition. Because of his stoic demeanor at the time of his wife's death and their frequent arguments, his son Jed believes that he did not love his wife and bears a grudge against him as a result.

Jed Burns is Colonel Keith's son who harbors a grudge against his father following his mother's death at a young age. Seeking to get revenge by tarnishing his father's name, he becomes a terrorist and leads a group of hijackers who take control of an airliner, killing many of the hostages.

Camel is Gil's righthand man, who is responsible for kidnapping Kat Suri. He later attempts to kill Corey and Jail and assists in Jackal's attempt to steal an Incan golden idol by detonating explosives in the museum it is put on display in.

Corey is a New York Police Department detective who approaches Jail and Shall for help in bringing back his former lover Kat Suri. Corey has an allergy to women, breaking out in a rash when they are physically within a meter of him, and vomiting when they are right next to him. However Kat is the only woman who does not affect him in this way. Corey is chosen to lead the police team charged with stopping Jackal and Kat Suri specifically, from stealing a priceless Incan golden idol from a museum, causing intense inner conflict.

Gil is the current head of Jackal, a criminal organization that aims to steal a priceless Incan golden idol that will be put on display in a New York museum. He was an orphan who was taken in by Jackal as a young boy and raised as a thief alongside Kat Suri. He tries to prevent her from leaving Jackal by having her kidnapped and ordering Camel to kill Corey.

Kat Suri is a highly-skilled pickpocket who successfully uses her feminine wiles against her male targets. An orphan who was taken in at a young age by the criminal organization Jackal and trained as a thief, she is now considered the organization's best one. Kat initially used Corey to shelter her from three of her victims by lying to him, but grew to love him after he steadfastly defended her against them despite sustaining multiple injuries. She kept her true nature as a pickpocket secret from Corey and left him after he was promoted to detective.

The chief of the NYPD who is personally involved with tracking down a few of Jail's targets, but is unsuccessful despite his best efforts.

The manga was released in tankōbon form in two volumes which also included three of Inoue's one shot manga stories, Purple Kaede, Flower Shōnen, and Like Jordan. Chameleon Jail was later rereleased as a single volume which included another of Inoue's one shots, Baby Face.