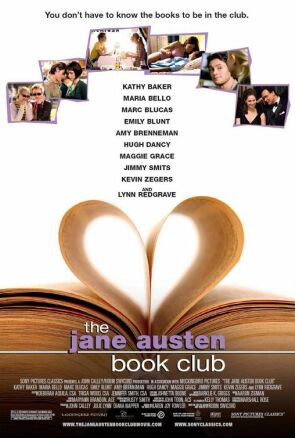 "The Jane Austen Book Club" is 2007 American romantic written and directed by . The screenplay, adapted from the 2004 novel of the same name by , focuses on a book club formed specifically to discuss the six novels written by . As they delve into Austen's literature, the club members find themselves dealing with life experiences that parallel the themes of the books they're reading.

The book club is the brainchild of six-time Bernadette, who latches onto the idea when she meets Prudie, a prim, married high school French teacher in her mid-20s, at a Jane Austen film festival. Her concept is to have six members discuss all of Austen's six novels, with each member hosting the group once a month. Also inducted into the club are Sylvia, a housewife who recently has separated from her philandering husband Daniel after more than two decades of marriage; Sylvia's 20-year-old daughter Allegra; Jocelyn, a happily unmarried control freak and breeder of s who has been Sylvia's friend since childhood; and Grigg, a fan who's roped into the group by Jocelyn with the hope he and Sylvia will prove to be a compatible match.

As the months pass, each of the members develops characteristics similar to those of Austen's characters and reacts to events in their lives in much the same way their fictional counterparts would. Bernadette is the figure who longs to see everyone find happiness. Sylvia clings to her belief in steadfast love and devotion, and eventually reconciles with Daniel. Jocelyn denies her own feelings for Grigg while playing matchmaker for him and Sylvia. Prudie, encumbered with her inattentive husband Dean and a free-spirited, pot-smoking, mother, a product of the 1960s counterculture, finds herself desperately trying not to succumb to her feelings for her seductive student Trey. Allegra, who tends to meet her lovers while engaging in death-defying activities, feels betrayed when she discovers her current partner, aspiring writer Corinne, has used Allegra's life as the basis for her short stories. Grigg is attracted to Jocelyn and mystified by her seeming lack of interest in him, marked by her failure to read the novels he has hoped will catch her fancy. He also serves as the comedic foil to Jocelyn and Prudie's very serious takes on the books.

In "The Book Club Deconstructed", a bonus feature on the release of the film, screenwriter/director Robin Swicord explains how each of the six book club members is based on a character in one of Austen's novels. Bernadette represents Mrs. Gardiner in "", Sylvia is patterned after Fanny Price in "", Jocelyn reflects the title character in "Emma", Prudie is similar to Anne Elliot in "Persuasion", Allegra is most like Marianne in "", and Grigg represents all of Austen's misunderstood male characters.

of the "" said the film "is such a well-acted, literate adaptation of Karen Joy Fowler's 2004 best seller that your impulse is to forgive it for being the formulaic, feel-good that it is ... Like the other movies and television projects in a Jane Austen boom that continues to gather momentum, it is an entertaining, carefully assembled piece of clockwork that imposes order on ever more complicated gender warfare." [ [http://movies.nytimes.com/2007/09/21/movies/21aust.html "New York Times", September 21, 2007] ]

of the "" called the film "a celebration of reading" and added, "oddly enough that works ... I settled down with this movie as with a comfortable book. I expected no earth-shaking revelations and got none, and everything turned out about right, in a clockwork ending that reminded me of the precision the Victorians always used to tidy up their loose ends." [ [http://rogerebert.suntimes.com/apps/pbcs.dll/article?AID=/20070920/REVIEWS/709200302/1023 "Chicago Sun-Times", September 21, 2007] ]

Ruthe Stein of the "" called the film "enjoyable if fairly predictable ... It's all a tad too neatly packaged, like a brand new set of Austen with the bindings unbroken. Still, a lively ensemble cast works hard ... Swicord's gift as a screenwriter is that her catch-up summaries avoid sounding pedantic or like . She's less assured as a director. Her pacing is off, with some scenes going on longer than they need to and others whizzing by so fast you miss the nuances. Relationships aren't always as clear as they should be. Still, Austen devotees are sure to lap up the central premise that her notions of love and friendship are as relevant today as ever. And if "The Jane Austen Book Club" gets people thinking about forming a club of their own, it will have served a more admirable purpose than most movies." [ [http://www.sfgate.com/cgi-bin/article.cgi?f=/c/a/2007/09/21/DD9QRM3FQ.DTL "San Francisco Chronicle", September 21, 2007] ]

Carina Chocano of the "" said it was nice to see "a movie so alive to the pleasures of reading and writing and sharing books, especially when the love feels sincere ... in parts, the story feels awkwardly truncated or too shallow to matter. But Swicord has a playful sense of humor and a good ear for dialogue, and the movie pleasantly accomplishes what it set out to accomplish." [ [http://www.calendarlive.com/movies/chocano/cl-et-jane21sep21,0,6874362.story "Los Angeles Times", September 21, 2007] ]

Dennis Harvey of "Variety" stated, "While there are occasional forced notes ... Swicord's direction proves as accomplished as her script at handling an incident-packed story with ease, capturing humor and drama sans cheap laughs or tearjerking." [ [http://www.variety.com/review/VE1117934622.html?categoryid=31&cs=1&p=0 "Variety", September 10, 2007] ]