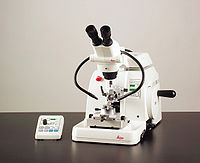 A microtome used in microscopy.

Microtomy is a method for the preparation of thin sections for materials such as bones, minerals and teeth, and an alternative to electropolishing and ion milling. Microtome sections can be made thin enough to section a human hair across its breadth, with section thickness between 0.05 and 100 µm. 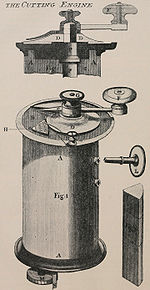 In the beginnings of light microscope development, sections from plants and animals were manually prepared using razor blades. It was found that to observe the structure of the specimen under observation it was important to make clean reproducible cuts on the order of 100 µm, through which light can be transmitted. This allowed for the observation of samples using light microscopes in a transmission mode.

One of the first devices for the preparation of such cuts was invented in 1770 by George Adams, Jr. (1750–1795) and further developed by Alexander Cummings.[2] The device was hand operated, and the sample held in a cylinder and sections created from the top of the sample using a hand crank.[1][3]

In 1835, Andrew Prichard developed a table based model which allowed for the vibration to be isolated by affixing the device to the table, separating the operator from the knife.[4]

Occasionally, attribution for the invention of the microtome is given to the anatomist Wilhelm His, Sr. (1865),[5][6] In his Beschreibung eines Mikrotoms (German for Description of a Microtome), Wilhelm wrote:

The apparatus has enabled a precision in work by which I can achieve sections that by hand I cannot possibly create. Namely it has enabled the possibility of achieving unbroken sections of objects in the course of research.

Other sources further attribute the development to a Czech physiologist Jan Evangelista Purkyně. [7] Several sources describe the Purkyne model as the first in practical use.[8][9]

The obscurities in the origins of the microtome are due to the fact that the first microtomes were simply cutting apparatuses, and the developmental phase of early devices is widely undocumented.

At the end of the 1800s, the development of very thin and consistently thin samples by microtomy, together with the selective staining of important cell components or molecules allowed for the visualisation of microscope details.[10][11]

The most common applications of microtomes are:

A recent development is the laser microtome, which cuts the target specimen with a femtosecond laser instead of a mechanical knife. This method is contact-free and does not require sample preparation techniques. The laser microtome has the ability to slice almost every tissue in its native state. Depending on the material being processed, slice thicknesses of 10 to 100 µm are feasible. 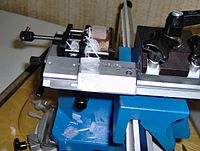 A sled microtome is a device where the sample is placed into a fixed holder (shuttle), which then moves backwards and forwards across a knife. Modern sled microtomes have the sled placed upon a linear bearing, a design that allows for the microtome to readily cut many coarse sections.[12] By adjusting the angles between the sample and the microtome knife, the pressure applied to the sample during the cut can be reduced.[12] Typical applications for this design of microtome are of the preparation of large samples, such as those embedded in paraffin for biological preparations. Typical cut thickness achievable on a sled microtome is between 1 and 60 µm. 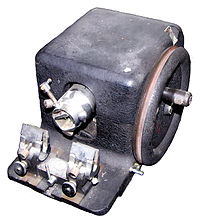 A rotary microtome of older construction.

This instrument is a common microtome design. This device operates with a staged rotary action such that the actual cutting is part of the rotary motion. In a rotary microtome, the knife is typically fixed in a horizontal position.[13]

In the figure to the left, the principle of the cut is explained. Through the motion of the sample holder, the sample is cut by the knife position 1 to position 2), at which point the fresh section remains on the knife. At the highest point of the rotary motion, the sample holder is advanced by the same thickness as the section that is to be made, allowing for the next section to be made.

The flywheel in many microtomes can be operated by hand. This has the advantage that a clean cut can be made, as the relatively large mass of the flywheel prevents the sample from being stopped during the sample cut. The flywheel in newer models is often integrated inside the microtome casing. The typical cut thickness for a rotary microtome is between 1 and 60 µm. For hard materials, such as a sample embedded in a synthetic resin, this design of microtome can allow for good "Semi-thin" sections with a thickness of as low as 0.5 µm. 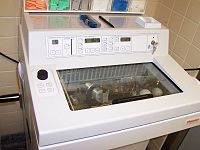 For the cutting of frozen samples, many rotary microtomes can be adapted to cut in a liquid nitrogen chamber, in a so-called cryomicrotome setup. The reduced temperature allows for the hardness of the sample to be increased, such as by undergoing a glass transition, which allows for the preparation of semi-thin samples.[12] However the sample temperature and the knife temperature must be controlled in order to optimise the resultant sample thickness 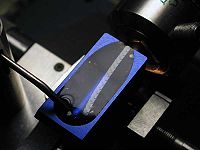 A ribbon of ultrathin sections prepared by room temperature ultramicrotomy, floating on water in the boat of a diamond knife used to cut the sections. The knife blade is the edge at the upper end of the trough of water.

An ultramicrotome is a main tool of ultramicrotomy. It can allow for the preparation of extremely thin sections, with the device functioning in the same manner as a rotational microtome, but with very tight tolerances on the mechanical construction. As a result of the careful mechanical construction, the linear thermal expansion of the mounting is used to provide very fine control of the thickness.[12]

These extremely thin cuts are important for use with transmission electron microscope (TEM) and Serial Block-Face Scanning Electron Microscopy (SBFSEM), and are sometimes also important for light-optical microscopy.[13] The typical thickness of these cuts is between 40 and 100 nm for transmission electron microscopy and often between 30 and 50 nm for SBFSEM. Thicker sections up to 500 nm thick are also taken for specialized TEM applications or for light microscopy survey sections to select an area for the final thin sections. Diamond knives (preferably) and glass knives are used with ultramicrotomes. To collect the sections they are floated on top of a liquid as they are cut and are carefully picked up onto grids suitable for TEM specimen viewing. The thickness of the section can be estimated by the interference colors of transmitted light that are seen as a result of the extremely low sample thickness.[14]

The saw microtome is especially for hard materials such as teeth or bones. The microtome of this type has a recessed rotating saw, which slices through the sample. The minimal cut thickness is approximately 30 µm, and can be made for comparatively large samples.[12]

The laser microtome is an instrument for contact free slicing.[15] Prior preparation of the sample through embedding, freezing or chemical fixation is not required, thereby minimising the artifacts from preparation methods. Alternately this design of microtome can also be used for very hard materials, such as bones or teeth as well as some ceramics. Dependant upon the properties of the sample material, the thickness achievable is between 10 and 100 µm.

The device operates using a cutting action of an infra-red laser. As the laser emits a radiation in the near infra-red, in this wavelength regime the laser can interact with biological materials. Through a sharp focussing in the of the probe within the sample, a focal point of very high intensity, up to TW/cm2, can be achieved. Through the non-linear interaction the so-called optical penetration, which the focal region introduces a material separation in a process known as photodisruption. Through the application of very short laser pulse durations, on the order of femtoseconds (1 fs = 10−15 s) a pulse of very small energy in the target region be deposited, allowing for precise control of the energy imparted into the sample, limiting the interaction zone of the cut to under a micrometre. External to this zone the ultra-short beam application time introduces minimal to no thermal damage to the remainder of the sample.

The laser radiation is directed onto a fast scanning mirror based optical system which allows for three dimensional positioning of the beam crossover, whilst allowing for beam traversal to the desired region of interest. The combination of high power with a high raster rate allows the scanner to cut large areas of sample in a short time. In the laser microtome the laser-microdissection of internal areas in tissues, cellular structures, and other types of small features is also possible.

The design of a microtome knife is dependant upon the material and preparation of the samples, as well as the final sample requirements (e.g. cut thickness and quality). 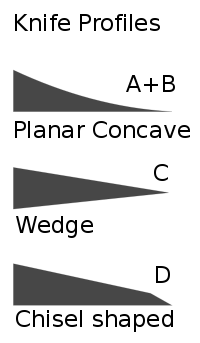 Generally, knives are characterized by the profile of the knife blade, which falls under the categories of planar concave, wedge shaped or chisel shaped designs.

Planar concave microtome knives are extremely sharp, but are also very delicate and are therefore only used with very soft samples.[13] The wedge profile knives are somewhat more stable and find use in moderately hard materials, such as in epoxy or cryogenic sample cutting. Finally, the chisel profile with its blunt edge, raises the stability of the knife, whilst requiring significantly more force to achieve the cut.

For ultramicrotomes, glass and diamond knives are required, the cut breadth of the blade is therefore on the order of a few millimetres and is therefore significantly smaller than for classical microtome knives. Glass knives are usually manufactured by the fracture of glass bars using special "knife-maker" fracturing devices. Glass knives may be used for initial sample preparations even where diamond knives may be used for final sectioning. Glass knives usually have small troughs, made with plastic tape, which are filled with water to allow the sample to float for later collection.[12] Diamond blades may be built into such an existing trough, allowing for the same collection method.

Prior to cutting by microtomy, biological materials are usually placed in a more rigid fixative, in a process known as embedding. This is achieved by the inflow of a liquid substance around the sample, such as paraffin (wax) or epoxy, which is placed in a mould and later hardened to produce a "block" which is readily cut.

The declination is the angle of contact between the sample vertical and knife blade. If the knife blade is at right angles (declination=90) the cut is made directly using a pressure based mode, and the forces are therefore proportionally larger. If however the knife is tilted, the relative motion of the knife is increasingly parallel to sample motion, allowing for a slicing action. This behaviour is very important for large or hard samples

The inclination of the knife is the angle between the knife face and the sample. For an optimal result, this angle must be chosen appropriately. The optimal angle depends upon the knife geometry, the cut speed and many other parameters. If the angle is adjusted to zero, the knife cut can often become erratic, and a new location of the knife must be used to smooth this out.

If the angle is too large, the sample can crumple and the knife can induce periodic thickness variations in the cut. By further increasing the angle such that it is too large one can damage the knife blade itself.