The Cooper T51 was a Formula One and Formula Two racing car designed and built by the Cooper Car Company for the 1959 Formula One season. The T51 earned a significant place in motor racing history when Jack Brabham drove the car to become the first driver to win the championship with a rear-engined car, in 1959. The T51 was raced in several configurations by various entrants until 1963 and in all no less than 38 drivers were entered to drive T51s in Grand Prix races. 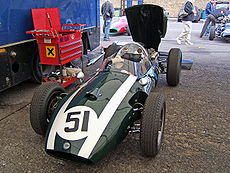 Aesthetically and aerodynamically the T51 was a natural development of the T43 and T45 cars that had given Cooper their first two wins. The Coopers continued their practice of building spaceframe chassis that ignored orthodox design thinking in having several curved links and the rear-engine layout meant weight savings and aerodynamic advantages over the front-engined cars, which had to find room for propshafts to the rear wheels. Also the location of the fuel tanks on either side of the cockpit rather than at the rear meant the car handled more consistently with different fuel loads, a vital factor during races which lasted up to three hours. One notable throwback, however, was the car's leaf spring rear suspension, although it used a more modern coil spring and wishbone setup at the front.

The standard F1 T51 was the first Cooper to be powered by the 2.5 litre 4 cylinder engine which Cooper and Lotus had commissioned Coventry Climax to build specifically for their rear-engined machines. The pioneering nature of this configuration created problems of its own, since there were so few rear-engined production cars from which a gearbox could be sourced. This shortage eventually created a niche in the market which paved the way for Hewland's prominence, but in the meantime many different solutions were tried with varying degrees of success. The works Coopers were fitted with modified Citroen gearboxes, while Rob Walker's team ran bespoke units from Italian specialist Valerio Colotti, although these proved much more fragile.

In all eight different engines were used in the back of T51s in championship races, with 2.2 and 1.5 litre Climax engines in addition to the standard 2.5: Scuderia Centro Sud and others used 2.5 and 1.5 litre engines from Maserati; the British Racing Partnership team used F2 powerplants from Borgward; Scuderia Eugenio Castellotti used their own Ferrari-derived 2.5 litre units; and one car used a Ferrari 2 litre engine lifted from a 625LM sportscar. 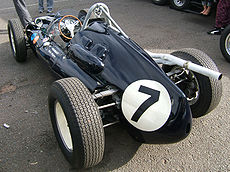 A T51 in the Rob Walker Racing Team's colours, as driven by Stirling Moss. (The roll hoop has been retro-fitted.)

The T51 had already won the Glover Trophy at Goodwood and the Silverstone International Trophy before it made its first World Championship appearance in the 1959 Monaco Grand Prix, with no less than eight examples entered. The Cooper works team fielded Jack Brabham, Bruce McLaren and Masten Gregory, Stirling Moss and Maurice Trintignant were entered by Rob Walker, two 1.5 litre F2 cars were entered by Equipe Nationale Belge for Lucien Bianchi and Alain de Changy, with Ivor Bueb driving another F2 machine. Only the five 2.5 litre cars qualified, with Stirling Moss in pole position (Cooper's first) and Brabham starting in third place. Jean Behra took the lead at the start, but after his Ferrari developed engine problems after 21 laps the Coopers dominated, with Moss and Brabham running first and second until Moss's transmission gave up the ghost 19 laps from the end. Brabham cruised to his first World Championship win with Trintignant third and McLaren fifth.From Monaco on Cooper's season went from strength to strength, with Brabham leading the championship from start to finish. Brabham took his second win in the British Grand Prix, before Moss took a brace in Portugal and Italy and dominated the non-championship Gold Cup.
By the final race at Sebring Cooper already had the Constructors' Championship in the bag, but the Drivers Championship was still up for grabs. Moss needed to beat Brabham and finish second or better to take the title, while Ferrari's Tony Brooks had a mathematical chance but needed both the win and fastest lap. Moss sprinted into the lead from pole position with Brabham in pursuit. After five laps Moss was a commanding ten seconds ahead, before his gearbox gave way again. Brabham led right up to the final lap, when a poor decision on Brabham's part meant he ran out of fuel. He managed to push his car across the line in fourth, but Cooper still won the race as Bruce McLaren became the youngest winner in Formula One history (a record he held until surpassed by Fernando Alonso in 2003), leaving Brabham the Drivers' Champion.

Cooper travelled down to the 1960 Argentine Grand Prix seemingly at the peak of their powers, and Trintignant won the Buenos Aires F1 event that preceded the main championship race. However this turned out to be the last major win for a T51, as the speed of the new Lotus 18 raised eyebrows around the paddock. On the journey back, John Cooper made his mind up that to stay at the front he needed to build a new car, and at the next championship race at Monaco the lowline T53 made its debut. In the meantime Moss took the Walker T51 to second in the Glover Trophy and qualified on pole position for the International Trophy before retiring with wishbone failure. Rob Walker had already bought a Lotus 18 for Moss, but ironically the Englishman was to miss a large part of the season through injuries sustained when his notoriously fragile Lotus lost a wheel at speed in Belgium. Cooper entered the T51 just three more times, with Scarab refugee Chuck Daigh and journeyman Ron Flockhart retiring each time. 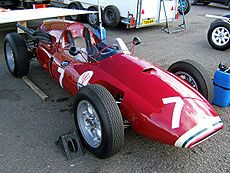 As well as being a racing team Cooper was very much a business, as shown by the 1958 International Trophy where 19 Coopers of various types made up more than half the grid. Right from the outset the T51 was designed to be produced in large numbers and offered for sale to privateer teams, with Rob Walker getting full-works cars and the rest receiving slightly more workmanlike models. No fewer than ten other entrants ran T51s in Formula 1 during 1959, and with the works team switching to the T53, and Walker using Lotus 18s, many of the ex-works cars were sold and continued to be entered in 1960. Indeed, the T51 continued to appear on minor, non-championship F1 race entry lists as late as the 1967 Rhodesian Grand Prix!

Guglielmo Dei set up Scuderia Centro Sud to publicise his business as distributor of Maserati cars to central and southern Italy, hence the name he chose for his team. Having fielded Maserati 250Fs for several years he switched to T51s midway through 1960, with the Climax replaced with a two-year-old 2.5 litre Maserati straight-4 250s engine which was used in Maserati's unspectacular 250S sportscar. In this configuration Centro Sud entered the T51 in 14 World Championship races, more than any other entrant. After converting to the 1.5 litre formula post-1960, Centro Sud's Cooper Maseratis still made the occasional appearance in minor Italian F1 races as late as 1963. Dei never kept his drivers for long, as they tended to be either journeymen, faded former stars like Maurice Trintignant, or up-and-coming racers like Wolfgang Von Trips who would soon be snapped up by bigger teams. In all, more than a dozen drivers drove T51s for Centro Sud.

The British Racing Partnership team was founded by Ken Gregory and Alfred Moss, Stirling's father, in late 1957. They spent 1958 and 1959 competing in Formula Two events, with the odd entry into F1 races, particularly in the UK, and experimented with 1.5 litre Borgward engines for their 1959-spec T51s, under an arrangement whereby Stirling Moss would use the Borgward-engined BRP cars with Rob Walker as the entrant.
For 1960 they had agreed for the three Samengo-Turner brothers, motor racing enthusiasts who owned Yeoman Credit Ltd., to bankroll their season with 2.5 litre Climax-engined F1 entries as well as a full slate of F2 entries with Borgward. BRP's list of drivers for 1960 was quite impressive, including at various points future champions Phil Hill and Denis Hulme, respected names like Tony Brooks and Dan Gurney, as well as Ferrari sportscar ace Olivier Gendebien. The Yeoman Credit cars were distinctive in having a mint green and red colourscheme and an air intake that stretched from the top of the car above the front axle along the left side of the cockpit to the engine's intake trumpets behind.
By the end of 1960 BRP had lost three drivers - Ivor Bueb, Harry Schell (who also ran his own T51 under the Ecurie Bleue banner) and Chris Bristow - to fatal accidents, and the Samengo-Turners decided to take their money to Reg Parnell's team instead, and since Parnell had filled up Cooper's order book BRP had to switch to Lotus for 1961.

†In 1960 only the best-performing car for each chassis-engine combination scored Constructors' points in each race, and on every occasion this was a works Cooper-Climax.

Named after the Ferrari driver who died in testing at Modena in 1957, Scuderia Eugenio Castellotti used modified Ferrari Tipo 553 2.0 litre engines bored out to 2.5 litres and rebranded as "Castellotti", with "Eugenio" on the cam covers. The cars were easily distinguishable from other F1 T51s in that their exhausts were fitted on the left, while all other engines used in T51s had their exhausts on the right. The team competed in four events in 1960 with lesser-known Italian drivers Gino Munaron, Giorgio Scarlatti and Giulio Cabianca.
In a cruel twist of fate, Cabianca was at the wheel of a T51-Castellotti at Modena in 1961 when he fell victim to one of Formula One's most bizarre accidents. With his throttle stuck open he was unable to stop, went out of the circuit onto public roads and collided with a taxicab.

The T51 was entered into championship races by a further twelve organisations, the most notable being Reg Parnell, who later took over Yeoman Credit's racing activities from BRP, and Fred Armbruster, who entered Pete Lovely in the 1960 United States Grand Prix with a T51 uniquely fitted with a Ferrari Tipo 555 engine, a different engine to those used by Scuderia Eugenio Castelotti. The final World Championship appearance for a T51 came when Trevor Blokdyk took his Scuderia Lupini T51-Maserati to twelfth place in the 1963 South African Grand Prix.