Maid-Rite in Springfield, Illinois, is one claimant of the first drive-thru window. 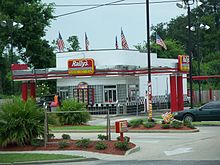 Some fast food chains, such as this Rally's located near New Orleans, LA, have two drive-throughs.

A drive-through, or drive-thru, is a type of service provided by a business that allows customers to purchase products without leaving their cars. The format was first pioneered in the United States in the 1930s[1] but has since spread to other countries. The first recorded use of a bank using a drive up window teller was the Grand National Bank of St. Louis, Missouri in 1930. The drive up teller only allowed deposits at that time period. [2]

Orders are generally placed using a microphone and picked up in person at the window. A drive-through is different from a drive-in in several ways— The cars create a line and move in one direction in drive-throughs, and do not park, whereas drive-ins allow cars to park next to each other, the food is generally brought to the window by a server, called a carhop, and the customer can remain in the parked car to eat.

Drive-throughs have generally replaced drive-ins in popular culture, and are now found in the vast majority of modern American fast-food chains. Sometimes, a store with a drive-through is referred to as a "drive-through," or the term is attached to the service, such as, "drive-through restaurant," or "drive-through bank."

Drive-thrus typically have signs over the drive-thru lanes to show customers which lanes are open for business. The types of signage used is usually illuminated so the "open-type" message can be changed to a closed-type message when the lane is not available. 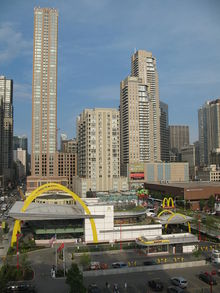 McDonald's first two-lane drive-through was at the Rock N Roll McDonald's in Chicago. 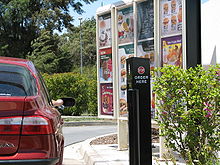 A typical Australian McDonald's drive through with speaker.

A drive-through restaurant generally consists of:

Drive-through designs are different from restaurant to restaurant; however, most drive-throughs can accommodate four to six passenger cars or trucks at once (called the queue).[citation needed]

In-n-Out Burger claims to have built the first drive-through restaurant in 1948. Harry and Esther Snyder, the chain's founders, built their first restaurant in Baldwin Park, California, with a two-way speaker to enable patrons to order directly from their cars without the intermediation of a carhop.[5] Maid-Rite also claims to have had the first drive through window. Other sources cite Jack in the Box as the first major restaurant specifically designed as a drive-through and featuring a two-way intercom.[6] The first Jack in the Box opened in 1951 in San Diego. The drive-through concept was so unfamiliar to people at the time that the Jack in the Box "clown," where the speaker was housed, held a sign saying, "Pull forward, Jack will speak to you."

Sierra Vista, Arizona, was the first city to have a McDonald's drive-through. The first McDonald’s drive-thru was created in 1975 near Fort Huachuca, a military base located adjacent to the city—to serve soldiers who weren’t permitted to get out of their cars while wearing fatigues.(http://www.mcdonalds.com/us/en/our_story/our_history.html) The original McDonald's was closed down and demolished in May 1999 and a new McDonald's replaced it.

The first drive-through restaurant (a McDonald's drive-through) in Europe opened at the Nutgrove Shopping Centre in Dublin, Ireland in 1985.[7]

In the Netherlands, Germany France and other northern European countries, McDonald's drive-thru service is called McDrive.

A drive-through shared by a bank and a coffee shop.

In 1928, City Center Bank, which became UMB Financial Corporation, president R. Crosby Kemper opened what is considered the first drive-up window. Shortly after the Grand National Bank in St Louis opened up a drive through, including a slot to the side for night time deposits. [8] On the page 8 of the December 15, 1940, issue of the Syracuse Herald Journal, Merchant's Bank of Syracuse, New York, ran an advertisement for the newly opened "Drive-In Teller Service" located on the side of their bank building on South Warren Street in downtown Syracuse. Westminster Bank, impressed by the concept, opened the UK's first drive-through bank in Liverpool in 1959, soon followed by Ulster Bank opening Ireland's first in 1961 at Finaghy.[9]

In recent years, there has been a decline in drive-through banking due to increased traffic congestion and the increased availability of automated teller machines and telephone and Internet banking.[citation needed] However, many bank buildings now feature drive-through ATMs.

In Mexico some areas of medium-high class have ATM Drive Through Facilities like in Huixquilucan,Estado de Mexico

Some businesses are built only for drive-through service, like this espresso shop.

Pedestrians sometimes attempt to walk through the drive-through to order food after the seated section of a fast-food restaurant has closed. Many establishments refuse drive-through service to pedestrians for safety, insurance, and liability reasons, such as Jack in the Box.[10] Cyclists are usually refused service with the same justification given. [11] However, in the summer of 2009, Burgerville gave use of the drive-thru window to bicyclists.[12] Similar issues can arise in rural areas for people on horseback or in a horse-drawn carriage. [13]

A drive thru only Tim Hortons location in Moncton, New Brunswick, Canada