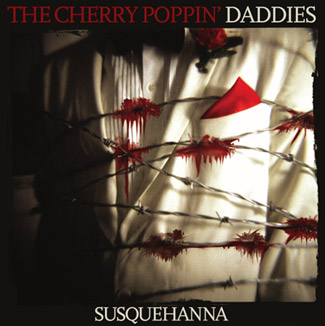 
"Susquehanna" is the fifth studio album by rock band , released on the band's own label in 2008.

"Susquehanna"'s sound is predominantly -influenced. and play a large part, aided by touches of , soca, and , though the album also branches into swing, , and . Says lead singer Steve Perry, "It's like a little movie, doing what I always do with genres, which is to use them kind of like paint. I use various genres and grind them against each other. I like to put a flamenco song next to a song that's a glam rock song next to a song that's a swing song, so that the flavor changes" [ [http://www.eugeneweekly.com/2008/04/24/music1.html Salvia, Vanessa. "Latin Lover". Eugene Weekly, 2008.] ]

Like their previous albums, "Susquehanna" is a ; each song is a narrative about memories; the song's characters remember their childhoods and parts of their lives both tragic and wonderful. Perry describes the album as "about losses and continuing on. Its about love, doubt and fatigue...and ultimately about gratitude" [ [http://www.daddies.com/Details.cfm?ProdID=31&category=0 Perry, Steve. "The Official CPD Website". 2008.] ] .

The album was released for digital download through the band's official website on February 19, 2008. The album was made available on compact disc on June 10, 2008.

News of a new album first came in mid-2006 during a radio interview with Steve Perry. He stated that the new album was in the process of being written, and would cover some new territory for the Daddies, drawing on Latin, tropical and sounds, though it would contain a few swing tracks as well.

On February 9th, 2007, the band released demos of three new songs available for purchase: the reggae-tinged "Blood Orange Sun", the Latin-inspired "Bust Out", and the flamenco ballad "Roseanne".

According to the band's official blog, recording began on the 25th of June. By September 5th, the record was finally tracked but not fully mixed, and given the title "Susquehanna", after the river near where Steve Perry grew up (until then, the album went under a number of working titles, including "Truth & Consequences" and "The Good Things"). Perry has confirmed that there are 12 tracks on the album, and they're "...all part of the same story..... does that make it a rock opera, concept album or just a bunch of stuff that happened?"

All songs composed by Steve Perry