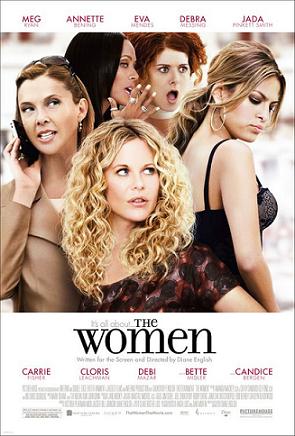 "The Women" is 2008 American written and directed by . The screenplay is an updated version of the -directed 1939 film of the same name, which was based on the 1936 play by .

In the original film, most of the characters were s whose primary interest was idle . In the 2008 version, several are working in the fields of and , and the character of Alex Fisher is openly gay ["Entertainment Tonight", January 3, 2008] .

The central character is clothing designer Mary Haines, who lives in a beautiful country home with her wealthy financier husband and their 11-year-old daughter. Her best friend Sylvie Fowler is the editor of a prominent fashion , a woman who dictates the latest in taste and style for fashionistas. When Mary's husband becomes involved with Crystal Allen, a perfume salesgirl in , her friendship with Sylvie is put to the test. Everyone in their close-knit circle of friends, including the ever-pregnant Edie Cohen and author Alex Fisher, begins to question their loyalty to each other and their romantic involvements.

In 1994, Julia Roberts and Meg Ryan agreed to co-produce and star in a contemporary version of the classic film written by Diane English and directed by , with a supporting cast including , , and . Two years later, the first table reading of the script was held on the lot. Despite the enthusiasm of everyone involved, the project stalled when Roberts and Ryan decided they wanted to play the same role. English spent the following year revising the screenplay, during which time Brooks dropped out to direct "". Roberts also lost interest and moved on. English first entertained the idea of directing the film herself in 2001. Over the next few years, , , , , and were among those to express interest, although none were attached officially. After being turned down by every major Hollywood studio, English decided to develop the project as an and approached Victoria Pearman, the president of 's production company, Jagged Films, who agreed to produce the film for Picturehouse. Upon its completion, it was shown to executives at , which had absorbed Picturehouse in the interim. Unimpressed, they put the film on the back burner until the box office success of "Sex and the City" convinced them there was an audience for an all-female film ["Entertainment Weekly", September 5, 2008, pp. 46-49] .

The film was shot on location in and Georgetown, Gloucester, Sudbury, Medfield, and in . In keeping with the all-female theme, all portraits and sculptures of men were replaced with those of women when scenes were shot in the .

of the "" called the film "a witless, straining mess" and added, " [Y] ou wait in vain for a moment of snappy repartee, of fresh emotion, of grace or charm or ... If "The Women" had managed to give its various impulses some kind of coherent shape or tone, it might be worth arguing about. As it is, the movie wanders and wallows, stumbling toward screwball before veering in the direction of weepiness and grasping at satirical urbanity along the way ... [R] arely has class struggle, or catfighting, for that matter, been so tediously waged. And rarely have so many fine actresses been enlisted in such a futile cause." [ [http://movies.nytimes.com/2008/09/12/movies/12wome.html?ref=arts&em "New York Times", September 12, 2008] ]

of the "" observed, "While the original film ... saw itself as a catty entertainment about New York society women coping with the infidelity of the husband of one of their friends, English has something grander and more complex in mind ... [T] his version sees itself as both a farce and a manifesto, a glorification of female friendship and a celebration of women's need for self-realization ... All that would be a handful to pull off for the most experienced filmmaker, but English has never directed before, and it shows. The visual choices she makes in "The Women" are invariably static, and except for whatever energy the performers can manage, the storytelling has a dispiriting flatness to it ... [The film] becomes unfocused as it stumbles over all the points it wants to make. Given English's writing skills, the dialogue doesn't help as much as it should, tending too much toward one-liners that aim for raunchy whenever possible. Never particularly believable, the story quickly unravels into schematic contrivance and wish-fulfillment fantasy." [ [http://www.latimes.com/entertainment/la-et-women12-2008sep12,0,4883049.story "Los Angeles Times", September 12, 2008] ]

David Wiegand of the "" said, "English doesn't make much of it very enjoyable. She's so careful to resist the Neanderthal sensibilities of the original film, she often neglects to make her version of the story, well, fun. Worse, it's only occasionally believable ... Even those who never saw Cukor's movie will feel something is missing in English's version. Yes, some of what's missing is humor and snappy dialogue, but that could be forgiven, if only some of the characters were more believable and the direction not quite as uneven. English knows how to get good performances out of her cast, but her pacing is languid and sloppy, so much so that one is tempted to believe that for all she knows about pacing a 30-minute sitcom, English isn't quite ready to tackle the longer form." [ [http://www.sfgate.com/cgi-bin/article.cgi?f=/c/a/2008/09/11/DDRK12Q7IR.DTL "San Francisco Chronicle", September 12, 2008] ]

of altogether hated the movie and wrote: " ["The Women" is] and I'm choosing my words carefully here — one of the worst movies I've ever seen." [http://www.time.com/time/arts/article/0,8599,1840522,00.html]
of the "" was one of the few critics who enjoyed the film. He awarded it three out of four stars and commented, "What a pleasure this movie is, showcasing actresses I've admired for a long time, all at the top of their form ... Diane English ... focuses on story and character, and even in a movie that sometimes plays like an infomercial for Saks Fifth Avenue, we find ourselves intrigued by these women ... "The Women" isn't a great movie, but how could it be? Too many characters and too much for that, and the comedy has to be somewhat muted to make the characters semi-believable. But as a well-crafted, well-written and well-acted entertainment, it drew me in and got its job done." [ [http://rogerebert.suntimes.com/apps/pbcs.dll/article?AID=/20080911/REVIEWS/809119989/1023 "Chicago Sun-Times", September 11, 2008] ]