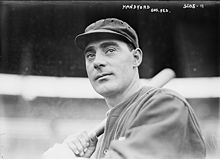 Charlie Hanford with the Buffalo Buffeds in 1914.