BAMU was established as "Marathwada University" on August 23, 1958. 153 colleges are affiliated to the university. The student population exceeds 100,000.

A year before the establishment of Marathwada University, the population of Marathwada was about 5.3 million, and there were around 3,686 primary schools, 231 middle schools, 95 high schools, one polytechnic, and one technical school in Marathwada.

There were nine colleges in Marathwada, listed below, all affiliated with Osmania University at Hyderabad in current Andhra Pradesh state.

In response to demand of the public in Marathwada region for a university, the government appointed on 27 April 1957 a committee with the charter to provide recommendations regarding establishment of such a university. The governor of Maharashtra signed the Marathwada University Act on May 5, 1958.

Jawaharlal Nehru, then Prime Minister of India, inaugurated Marathwada University on August 23, 1958 at Aurangabad on the premises of the temporary main building of the university.

Affiliation of the following nine colleges was transferred from Osmania University to the newly formed Marathwada University:

The university campus covers more than 650 acres (2.6 km2). The hills provide a picturesque background. The Aurangabad caves are embedded in the campus. The Soneri Mahal (Golden Palace), an ancient monument at the foot of the hills, is at the center of the campus, while Bibi Ka Maqbara is at the north side.

The university's coat of arms bears the following emblems: 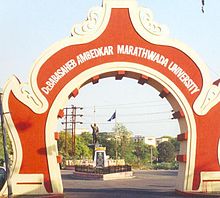 On August 5, 2004, a subcenter of BAMU was established at Osmanabad. It has been temporarily started at Government Ayurvedic College in Osmanabad.

The subcenter has the following postgraduate departments: