Initially, it was announced that the school would be named for Donald Bren, chairman of the Irvine Company, in honor of his $20 million donation towards its founding. In 2008 an agreement was reached between Bren and UCI that the school would not bear his name. Chemerinsky said, "We are deeply grateful for the Bren gift, but it was decided between the chancellor and Mr. Bren that our name should be parallel to other UC schools."[3]

Over 2,700 applications were received to join the inaugural class and 4% were accepted.[4] Classes officially began for the first class of students on August 24, 2009. The School's inaugural class is composed of 34 females and 26 males with a median LSAT of 167 and median undergraduate GPA of 3.61.[1] UC Irvine's LSAT and GPA statistics rival Southern California's other top law schools, UCLA and USC, which are both ranked among the nation's top 20 by US News & World Report.[5] University of Chicago Law Professor Brian Leiter, in his "Leiter Law School Rankings", ranked the UC Irvine faculty 9th in the nation in terms of scholarly impact.[6] 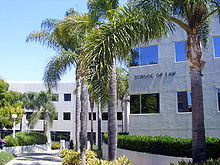 In hiring an inaugural dean, the University approached constitutional law Professor[9] Erwin Chemerinsky. After signing a contract with Chemerinsky on September 4, 2007, the offer was rescinded by UCI Chancellor Michael V. Drake because he felt the law professor's commentaries were "polarizing" and would not serve the interests of California's first new public law school in 40 years; Drake claimed the decision was his own and not the subject of any outside influence.[10] The action was criticized by liberal and conservative scholars who felt it hindered the academic mission of the law school, and disbelief over Chancellor Drake's claims that it was the subject of no outside influence.[10][11]

The issue was the subject of a New York Times editorial on Friday, September 14, 2007.[12] Details emerged revealing that UCI had received criticism on the hire from California Chief Justice Ronald M. George, who criticized Chemerinsky's grasp of death penalty appeals, as well as a group of prominent Orange County Republicans and Los Angeles County Supervisor Michael D. Antonovich, who wanted to derail the appointment.[13] Drake traveled over a weekend to Durham, North Carolina, and the two reached an agreement late Sunday evening.[13] On September 17, Chemerinsky issued a joint press release with Drake indicating that Chemerinsky would head the UCI law school, stating "Our new law school will be founded on the bedrock principle of academic freedom. The chancellor reiterated his lifelong, unqualified commitment to academic freedom, which extends to every faculty member, including deans and other senior administrators."[14]

Annual tuition is expected to cost $40,000 for California residents and $50,000 for non-residents. For the first, second and third entering classes, tuition was paid for by private scholarships from Mark P. Robinson, Jr., and others at 100%, 50% and 33% respectively.[17]