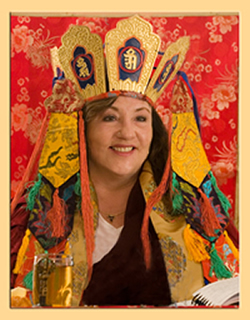 Jetsunma Ahkon Lhamo (, -; born Alyce Louise Zeoli) is an enthroned within the lineage of the tradition of . In the late 1980’s, she gained international attention as the first Western woman to be named a reincarnate .

His Holiness the Third Drubwang Padma Norbu (“Penor”) Rinpoche, 11th Throneholder of Monastery, former Supreme Head of the tradition, described as “a rather unassailable figure in Tibetan Buddhism,” [Sherrill. "The Buddha From Brooklyn", pg 7] officially recognized Jetsunma in 1987 as the tulku of Genyenma Ahkon Lhamo during her visit to his Namdroling Monastery in , , India ["American-born Woman Tulku Enthroned," "Vajradhatu Sun," October/November 1988] . As is customary, Penor Rinpoche sought confirmation of his recognition before announcing it. He received it from both His Holiness (1910-91), the previous Supreme Head of the Nyingma tradition who was on a teaching visit to Namdroling at the time, and the most senior Palyul tulku, the Second Dzongnang Jampal Lodro Rinpoche (d. 8/87). ["Statement by H.H. Penor Rinpoche Regarding the Recognition of Steven Seagal as a Reincarnation of the Treasure Revealer Chungdrag Dorje of Palyul Monastery" [http://palyul.org/docs/statement.html] ]

From June to September 1988, Penor Rinpoche was in residence at KPC in Poolesville to transmit all of the teachings contained in the (“Treasury of Precious Termas”), ’s massive 19th c. compilation of all of the extant revelations of Guru ’s teaching cycles known as . This was the first time that these teachings had ever been conferred in a Western country. ["Rinchen Terzod Empowerments," "Snow Lion Newsletter," Spring 1988] According to Penor Rinpoche’s [explanation at the time [http://www.ustream.tv/recorded/739732] ] , there is a point toward the end of the Rinchen Terdzod transmissions, during the conferral of the Vajrapani empowerment from Rigdzin Godem’s Jangter (“Northern Treasures”) cycle, where it is customary to perform enthronement of tulkus. Thus, on September 24, 1988, Penor Rinpoche conducted this ceremony for Jetsunma as the tulku of Genyenma Ahkon Lhamo. Jetsunma considers Penor Rinpoche to be her root guru, along with [Ven. Gyatrul Rinpoche [http://www.tashicholing.org/gyatrul_rinpoche_bio.htm] ] , Spiritual Director of Yeshe Nyingpo based in Ashland, Oregon, who is recognized as an incarnation of the First Ahkon Lhamo’s brother, Rigdzin .

Among the more than 100 tulkus Penor Rinpoche has recognized [cite Penor Rinpoche’s statement] , the only other Westerner was . announced at in India in February, 1997, that Seagal was an incarnation of the 17th c. Chungdrag Dorje. Because of Seagal’s international renown as an action movie star, the announcement sparked numerous derisive articles in the mainstream US press and called into question both of Penor Rinpoche's American tulkus. [Pico Iyer, "The Price of Faith," "Tricycle: The Buddhist Review", Summer 200, pg 86] [Sherrill, "The Buddha From Brooklyn", pg 375] [Tom O'Neill, "Hollywood Goes Tibet," "Us Magazine", January 1998, pg 77] [Will Blythe, "Mr. Popular," "Outside Magazine", November 1997, pg 118] [Nancy Griffin, "The Buddha from Another Planet," "Esquire", October 1997, pg 60] subsequently released an extensive public explanation ["Statement by H.H. Penor Rinpoche Regarding the Recognition of Steven Seagal as a Reincarnation of the Treasure Revealer Chungdrag Dorje of Palyul Monastery" [http://palyul.org/docs/statement.html] ] describing the Tibetan tradition of tulku recognition in general, Seagal’s recognition specifically, and delineating the difference in meaning between the recognition of a tulku (Seagal’s case), in which he or she “does not take on any formal responsibilities at the time,” and the following step of enthronement (Jetsunma’s case), which “formally invests the tulku with the responsibility of furthering the activities associated with their particular tulku lineage.”

A further recognition of Jetsunma occurred in 1994, when indicated in a long life prayer he composed that Jetsunma was an incarnation of Lhacham , the Indian princess of Zahor and one of the consorts of , a tantric master who helped establish the Buddha's teaching in Tibet. [Sherrill, Martha. "The Buddha from Poolesville," "Washington Post", Apr 16, 2000] [Johnson, Allie. "Trouble in Shangri-La," "Kansas City - News", Apr 22, 2004] In 1996, she traveled to India and visited many of the places where Mandarava was known to have practiced. [Sherrill, "The Buddha From Brooklyn", pg 313] Inspired by the recognition, several of Jetsunma’s students sought out and found a copy of Mandarava’s middle-length spiritual biography, revealed as a terma in the 17th c. by Samten Lingpa, at the U.S. Library of Congress. They then sponsored the first English translation of the text, published as "The Lives and Liberation of Princess Mandarava" in 1998. [ Chonam, Lama and Khandro, Sangye. "The Lives and Liberation of Princess Mandarava, The Indian Consort of Padmasambhava" Wisdom Publications 1998, Translator's Preface,pg x ] . Jetsunma’s connection with Mandarava was further reinforced in a long life prayer composed for her in 2004 by His Holiness Dorje Lopen , one of the most highly respected lamas in Bhutan. [His Holiness Ngawang Tenzin Rinpoche [http://www.sacredesignpdx.com/rinpoche_bio.htm] ]

Zeoli was born in on October 12, 1949, to an Austrian/Dutch Jewish mother and Italian father and attended the Dutch Reform Church as a youth.

She studied with a New Age teacher named Jim Gore and gave channeled psychic readings at the Black Mountain Light Center in North Carolina. [Sherrill, "The Buddha From Brooklyn", pg 44]

In 1980, she met Michael Burroughs, a graduate student in religions at the . She and Mulloy separated in 1981. [Sherrill, "The Buddha From Brooklyn", pg 49]

Zeoli moved with Burroughs and her son Christopher to . She married Michael in 1983 and changed her name to Catharine Burroughs. Together they formed the Center For Discovery and New Life beginning with former members from the Black Mountain Light Center. She channeled the prophet Jeremiah,

In 1984, the Burroughs met Kunzang, a student of H. H. , who was selling rugs to support monastery.

Thereafter she continued to channel the prophet Jeremiah, but the channelled teachings took on a more Buddhist flavor,

In 1985, the Center for Discovery and New Life formed a corporation and purchased an antebellum style mansion in . They purchased numerous large crystals [ [http://ih.constantcontact.com/fs015/1101301140013/img/806.jpg?a=1101864701609 Crystals at Jetsunma's center in Maryland] ] weighing hundreds of pounds and held a three-day retreat to bring in Universal Spirit and reinstituted the 24 hour prayer vigil at the new location. [Nyingma.com. [http://www.nyingma.com/artman/publish/kunzang_palyul_choling_.shtml Kunzang Palyul Chöling] , Feb 16, 2007] Already overextended with their new mortgage, the crystals required the temple to refinance, driving it into the red. [Sherrill, "The Buddha From Brooklyn", pg 146]

In 1996, Jetsunma's vision for Kunzang Palyul Choling was to create a place for pilgrimage with a hospice, school for children, a monastery and a tantric college for higher education in the Buddha's teachings. [Mackenzie, pg 87] However, in the sixteen years of KPC's existence from 1985-2001, none of these had materialized.Fact|date=September 2008

In 1996, Jetsunma Ahkon Lhamo was arrested for a strange on two monastics in front of over thirty students who were invited to watch. She instructed that they be served snacks.

When Jetsunma and her students were interviewed for Marlowe's "Reborn in the West", prior to KPC at her Center for Discovery and New Life organization's inception, Jetsunma's material life was deteriorating quickly with a short supply of money and comfort. She lived in a one room place with crates for furniture while working in a department store as her husband searched for work. Despite her not wanting to be paid for teaching, her students started the organization to pay for classes from her. [Mackenzie, pg 66-67 ]

Students empty their savings and retirement accounts and run deeply into debt to pay her salary. [Sherrill, pg 242] One student donated $200,000 for a monastic college but the money instead was used to fund Ladyworks, the now-defunct hair product business of which Jetsunma was the sole shareholder. [Sherrill, "The Buddha From Brooklyn", pg 352]

In 1990, Jetsunma announced ambitious plans to build a monastery for 500 monks and nuns on 65 acres of land purchased by KPC. Sixteen monks and nuns were temporarily housed in a retreat center until the monastery could be built. As reported by Mirabella magazine, by 1992, Jetsunma asked that the ordained give her the retreat center to be renovated into a house for herself.

Jetsunma does not financially support her monks and nuns, but instead, her ordained sangha support her financially. Her monks and nuns were asked to pay $300 a month rent for their lodgings as well as tithe to the temple and to the Lama Support Fund, which in almost all cases requires them to work outside full-time jobs.

In 1991, Jetsunma separated from Michael Burroughs. [Iyer, pg 80, 84] In 1992, when her divorce was finalized, she hosted a controversial divorce party where she and her students created an effigy of Michael, stabbed it with knives, threw it into the driveway, and ran over it in their cars, perplexing and horrifying the Tibetans in attendance.

Publicity surrounding the treatment of her consorts raised a question in the Buddhist press: whether consorts are fortunate and spiritually blessed by their guru's attentions or if this represents exploitation and abuse of the teacher's authority. [Iyer, pg 79, 83]

Jetsunma has also written Buddhist poetry, such as this excerpt from her poem "War Cry": [Sherrill, "The Buddha From Brooklyn", pg 294-297.]

* [http://www.palyulproductions.org/ Palyul Productions] - records Jetsunma's teachings with the intent to preserve and disseminate Palyul teachings.
* [http://www.tara.org/BuddhistReliefHome.htm Buddhist Relief] - a disaster relief organization established in response to the 2005 disaster in . The organization is currently focused on supporting the efforts in as a result of military action against monastics.

* Tara's Babies - an animal sanctuary founded in 2005 to rescue animals abandoned during the evacuation. [Arizona Republic, October 5, 2005] Initially caring for 130 dogs, the sanctuary is set in convert|148|acre|km2 of former ranch land nestled in the three-million acre (12,000 km²) near , .

* Garuda Aviary - rescues s and many other neglected and abused s, based in [Montgomery Gazette, November 28, 2007] .
* [http://www.jetsunmamusic.com/ Blinded By View] - produces Jetsunma's music.

* Ladyworks - A hair care product line sold in with Jetsunma as the sole shareholder. In 1996 Ladyworks created a million-dollar infomercial for the products featuring Jetsunma.

* Tara Studios - Tara Studios, producing small Buddhist statues, was founded in 1991 with the hopes to financially support KPC's monks and nuns. After one nun invested her remaining trust fund of $80,000, the company floundered and is now defunct.

* Ani's Ink - A small typesetting business predicted to be a "sure thing" by Jetsunma left behind a long standing debt.