The term Corrupt Bargain refers to three separate events that each involved a United States presidential election and a deal that was struck that many viewed to be corrupt from many standpoints, such as in the Election of 1824 controversy over the House of Representative's choice for president with accused corruption on the part of the Speaker of the House, or in 1876 wherein accusations of corruption stemmed from officials involved in counting hotly needed electoral votes on both sides. 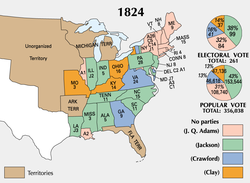 Votes in the Electoral College, 1824. 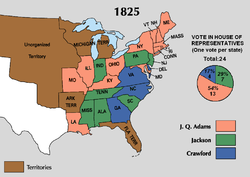 The voting by state in the House of Representatives, 1825. Note that all of Clay's states voted for Adams.

After the votes were counted in the U.S. presidential election of 1824, no candidate had received a majority of the Presidential Electoral votes, thereby putting the outcome in the hands of the House of Representatives. To the surprise of many, the House elected John Quincy Adams over rival Andrew Jackson. It was widely believed that Henry Clay, the Speaker of the House at the time, convinced Congress to elect Adams, who then made Clay his Secretary of State. Supporters of Jackson, a Senator from Tennessee at the time, who won a plurality of those popular votes which had been counted (though not necessarily of all votes) as well as the greatest number of electoral votes, denounced this as a "corrupt bargain."[1][2]

More recently, analysis by means of game theory mathematics has proposed that, contrary to the assertions of Jackson, his supporters, and countless historians since, the results of the election were consistent with so-called "sincere voting"—that is, those Members of the House of Representatives who were unable to cast votes for their most-favored candidate apparently voted for their second- (or third-) most-favored candidate, as the Constitution requires.[3] This suggests that the result was not a consequence of any "corrupt bargain" between Adams and Clay, but was instead a natural consequence of an electoral field that was fundamentally divided between those who supported Jackson and those who would support anyone other than Jackson. The latter united behind Adams—who was the natural alternative to Jackson, since third place candidate William H. Crawford was in poor health and had no realistic chance of winning the House vote—and so prevailed. Clay was also from the same subdivision of the Democratic-Republican Party as Adams, making him the natural choice. The persistence of the "corrupt bargain" charge appears, therefore, to be the subject of serious dispute.

Regardless of the various theories concerning the matter, John Quincy Adams was a one-term President, and his rival, Jackson, was elected President by a large majority of the Electors in the election of 1828. The corrupt bargain theory, however, still carries sufficient merit not because of the decision of electing John Quincy Adams, but as a result of the agreement to give the Secretary of State position to Henry Clay. While it had occurred in a few previous elections that the incumbent President had been succeeded by his Secretary of State (James Madison, who had served as Thomas Jefferson's Secretary of State, succeeded Jefferson as President; James Monroe, Madison's Secretary of State, followed Madison into the presidency), this result was not inevitable. Still, it is possible that Clay saw his installation in this office as likely to enhance the likelihood of his someday becoming President. Clay being offered the position of Secretary of State may be the strongest indication that he might have made an agreement with Adams to secure his election in return for the post.

The presidential election of 1876 is sometimes considered to be a second "corrupt bargain."[4] Three Southern states had contested vote counts, and each sent the results of two different slates of electors. Since both candidates needed those electoral votes to win the election, Congress appointed a special Electoral Commission to settle the dispute over which slates of electors to accept. After the commission awarded all the disputed electoral votes to the Republican candidate, Rutherford B. Hayes, and Congress voted to accept their report, some dissatisfied Democrats claimed that Hayes or his supporters had made a secret compromise to secure the support of some Congressional Democrats. Most of the items in this alleged "Compromise of 1877" were either never acted on (calling into question whether they were ever agreed to) or had already been the established position of Hayes from the time of his accepting the Republican nomination (hence not a sudden "compromise" at all).

Hayes's detractors labeled the alleged compromise a "Corrupt Bargain"[5] and mocked him with the nickname "Rutherfraud."[6]

The most often cited item in the "compromise" was the agreement to accept Southern "home rule," withdrawing the remaining Northern troops from Southern capitals. This would remove an important tool the federal government had used to insure that the South would uphold the 13th, 14th and 15th amendments, which were intended to protect the rights of African-Americans, especially the right to vote.

In fact, political support for maintaining these troops had dissipated during Grant's second term, and Hayes had little choice but to accept some form of "home rule." He attempted to do so, as stated in his nomination acceptance letter, by gaining promises from Southern states that they would respect the rights, and especially the voting rights, of the freedmen. (The Democratic platform of Samuel Tilden, on the other hand, promised removal of troops with no mention of any attempts to guarantee the freedmen's rights.) For a time Hayes's approach had some success, but gradually Southern states moved to build new barriers to the franchise.

Gerald Ford's 1974 pardon of Richard Nixon was widely described as a "corrupt bargain" by critics of the disgraced former president. These critics claim that Ford's pardon was quid pro quo for Nixon's resignation, which elevated Ford to the presidency. The most prominent example was then Representative Elizabeth Holtzman who, as the lowest ranking member of the House Judiciary Committee, was the only congressperson to explicitly ask whether the pardon was a quid pro quo. Ford cut Holtzman off declaring, “There was no deal, period, under no circumstances.”[7]