Military prison
Not to be confused with prisoner-of-war camp. 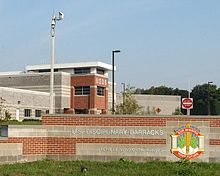 The United States Disciplinary Barracks in Fort Leavenworth, Kansas is a military prison

Most militaries have some sort of military police unit operating at the divisional level or below to perform many of the same functions as civilian police, from traffic-control to the arrest of violent offenders and the supervision of detainees and prisoners-of-war.

In Italy only one military jail now exists in Santa Maria Capua Vetere. Under Italian law, only those in government service (Army, Navy, Air Force, Guardia di Finanza and Carabinieri) who are under investigation in front of a military court or are sentenced to the penalty of Reclusione Militare by a military or civil court are held there. Those serving in the police corps (Polizia di Stato, Polizia Penitenziaria, Corpo Forestale dello Stato) are also held in military jail.[citation needed]

In Switzerland there are no special military prisons. Sentences are to be served in civilian prisons.[citation needed]

The British have one military prison, the Military Corrective Training Centre (colloquially known as the Glasshouse), in the town of Colchester where all servicemen (and women) who are convicted by military courts and sentenced to more than 28 days will be incarcerated. Women, although in the same prison, are kept separate from men. This prison is maintained and controlled by the British Army's Military Provost Staff (Adjutant General's Corps). More serious offenders with longer sentences are transferred to HM Prison Service as part of their dishonourable discharge.

The United States military's equivalent to the civilian jail, in the sense of "holding area" or "place of brief incarceration for petty crimes," is known colloquially as the guardhouse or stockade by the army and air forces and the brig by naval and marine forces. U.S. military forces currently maintain several regional prisoner holding facilities in the U.S.; see list of U.S. military prisons for names and locations.

In the United States, differential treatment seems to be suggested, but by no means mandated, by the Founding Fathers in the Fifth Amendment to its constitution. Members of the US armed forces are subject to the Uniform Code of Military Justice. Male non-commissioned military personnel convicted by courts martial and sentenced to five or more years' confinement, male commissioned officers and male prisoners convicted of offenses related to national security end up at the United States Disciplinary Barracks at Fort Leavenworth, Kansas. Male military convicts who received sentences of less than five years are confined at various regional confinement facilities operated by the U.S. Military both in the continental United States and abroad. All female military personnel convicted of felonies serve their sentences at the Naval Consolidated Brig, Miramar located at the Marine Corps Air Station Miramar near San Diego, California. In former times, criminals in the naval services, including those convicted of sodomy, were sent to the once-infamous Portsmouth Naval Prison,[2] which was closed in 1974.

A brig is a US military prison aboard a United States Navy or Coast Guard vessel, or at an American naval or Marine Corps base. The term derives from the US Navy's historical use of twin-mast sailing ships—or brigs—as prison ships.

Incarceration of prisoners of war

The Geneva Conventions provides an international protocol defining minimum requirements and safeguards for prisoners of war. In reality, many of these protocols are often ignored, especially more recent ones mandating the payment of a daily wage.

Prisoners are often kept in ad-hoc camps near the battlefield, guarded by MP's (military police) until they can be transferred to more permanent barracks for the duration of the conflict.

Treatment of prisoners-of-war has varied from age to age and nation to nation, the quality of conditions for prisoners often linked with the intensity of the conflict and the resources of the warring parties.

Military prisons and the treatment of military prisoners have often figured prominently in modern literature, cinema and even politics. In the 19th century, written accounts of the barbaric treatment accorded prisoners on both sides during the Napoleonic and Crimean wars helped lead to the founding of the Red Cross and the promulgation of the Geneva Conventions.

There are numerous examples of 20th and 21st-century cinema dealing with military prisons, including Hart's War (2002), starring Bruce Willis and Colin Farrell as American POWs in a German prison camp, continuing in a cinematic vein begun by Stalag 17 (1953). Stalag 17 portrays the struggles of a group of American airmen in a German Luftwaffe prison to deal with the poverty and drudgery of captivity and to help select members escape to freedom while dealing with a hostile commandant who has planted a spy in their midst. Based on the play by Donald Bevan and Edmund Trzcinski, this movie is widely considered the break-out role for American actor William Holden.

The Dirty Dozen (1967) with an all star cast features General Worden (Ernest Borgnine) ordering Major John Reisman (Lee Marvin) to recruit, train, and arm 12 convicted felons sentenced to the death penalty or lengthy sentences to parachute into Occupied France prior to D-Day to assassinate German generals and their staff at a chalet used as a rest centre. The film takes satiric looks at the Regular Army, military prisons, and the nature of war itself.

The Hill (1965) starring Sean Connery was set in a British military penal camp in North Africa during World War II.

The Great Escape (1963), starring Steve McQueen, James Garner, James Coburn, Richard Attenborough. Cameos included character actors Karl-Otto Alberty and Donald Pleasence. The film details the true-life adventures of a mixed group of Allied prisoners attempting to escape from a German Luftwaffe stalag, while changing some of the details, including names and nationalities and compressing events into a single camp.

Somebody Up There Likes Me (1956) features Paul Newman as an Army deserter and petty criminal who, with the encouragement of the athletic director at the above-mentioned Leavenworth Disciplinary Barracks uses boxing as means to deal with his restless energy and, eventually, to escape his life of crime and poverty and marry the girl of his dreams.

Andersonville (1996) and The Andersonville Trial (1970), both TV movies, dealt with the conditions at Andersonville Prison and its aftermath. George C. Scott directed and starred in the latter, along with William Shatner; the movie was based on an earlier play by Saul Levitt, who worked on The Untouchables TV series.

The Last Castle (2001) shows Robert Redford as an important US Army General who is sent to a military prison after contradicting a direct order given by the Commander-in-Chief. Once in prison, he begins to gather the support of inmates, much to the despair of the director of the facility, a Colonel played by James Gandolfini who dislikes losing his authority to a convicted felon. Mark Ruffalo and Delroy Lindo also appear in the movie.

X-Files character Special Agent Fox Mulder was arrested for the murder of a military man (later revealed to be a supersoldier) in the 2002 episode, The Truth. He was placed in a military prison awaiting trial.

Some of the late-20th-century military novels of American writer W.E.B. Griffin make mention of the former Portsmouth Naval Prison facility. In Semper Fi, Book I in The Corps series, the main character, Cpl. Ken McCoy finds himself assigned to a prisoner detail, which is riding on the same civilian train that McCoy is taking to his new post. The novel describes the pity that the young Marine feels for the unfortunate Portsmouth-bound sailors he has to guard, which include a small group of homosexuals, called "deviates" by the sergeant-of-the guard. Later in the same series, the corporal's own brother has a run-in with the military justice system for fighting and disorderly conduct.