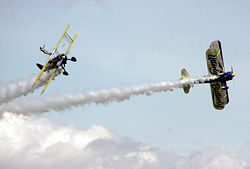 The UK Utterly Butterly display team perform an aerobatic maneuver with their Boeing Stearmans, at an air display in England.

Aerobatic maneuvers are flight paths putting aircraft in unusual attitudes, in air shows, dog fights or competition aerobatics. Aerobatics can be performed by a single aircraft or in formation with several others. Nearly all aircraft are capable of performing aerobatics maneuvers of some kind, although it may not be legal or safe to do so in certain aircraft.

Aerobatics consist of five basic maneuvers: Lines (both horizontal and vertical), Loops, Rolls, Spins, and Hammerheads. Most aerobatic figures are composites of these basic maneuvers with rolls superimposed.

Table of the basic aerobatic figures

Most of these can be entered either erect or inverted, flown backwards or have extra rolls added.

Where appropriate, the Aresti Catalog symbols have been included. Not all the figures are competition figures, and so some do not have diagrams to accompany the description.

Reading the diagrams, a figure begins at the small solid circle and ends at the short vertical line. Inverted flight (negative g) is depicted by dashed red lines. The small arrow indicates a rolling maneuver.