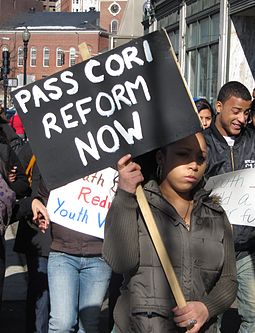 CORI has been controversial because information that a person has committed or been accused of committing a crime makes it difficult to obtain housing, employment, loans, insurance, entrance to college, or become a guardian or foster parent. The Massachusetts Alliance to Reform CORI, Boston Workers' Alliance, EPOCA and Neighbor to Neighbor, amongst other groups advocate for various changes, including quicker sealing of older records. Reform advocates call the reports flawed and difficult to interpret. CORIs display all court arraignments - regardless of the eventual outcome of the case - and advocates say this in effect turns all criminal histories into "life sentences". [2] They also point out that the social and economic impact of CORI affect the children of former offenders.

Currently, one must wait 15 years for a felony and 10 years for a misdemeanor after final disposition (the date probation is finished) to apply to the Office of the Commissioner of Probation[4] and have this record sealed. If however, during this time that individual receives even a minor citation, such as a traffic ticket for more than $50, he or she must wait an additional 15/10 years. As of 2010, a reform bill is in the state legislature, which would reduce these periods, while making CORI clearer and easier to obtain online. The reform is endorsed by some police chiefs, who believe it will help reduce recidivism.[5]