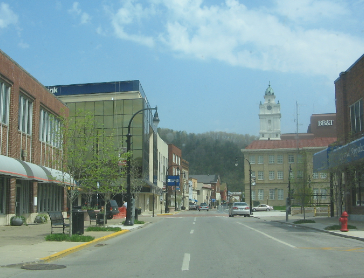 mapsize = 250px
map_caption = Location in the Commonwealth of

Pikeville is a city in Pike County, , . The population was 6,295 at the 2000 census. It is the of Pike CountyGR|6. Pike County has a population of approximately 70,000. Pike County was the childhood home of star , and is the home of former Governor . Professional golfers and , both of whom have won on the , were born in Pikeville. , pro baseball player with the Arizona Diamondbacks, is also a Pikeville native. and were both born in at Pikeville Regional Medical Center.

Pikeville is a big coal mining city. This is allowed by the mountains in the area.

There were 2,705 households out of which 29.7% had children under the age of 18 living with them, 41.0% were married couples living together, 14.5% had a female householder with no husband present, and 42.2% were non-families. 39.0% of all households were made up of individuals and 16.3% had someone living alone who was 65 years of age or older. The average household size was 2.14 and the average family size was 2.88.

, a private 4-year institution, is located in Pikeville. The college is one of the smallest in the nation to have an osteopathic medicine program as part of its curriculum. Founded in May 1996 [cite web |url=http://pcsom.pc.edu/about/history.htm |title=History of PCSOM |accessdate=2008-01-15 |format= |work= ] , the [http://pcsom.pc.edu/ Pikeville College School of Osteopathic Medicine] is one of three medical schools in the state of , along with the medical schools at the University of Kentucky and the .

In the fall of 2005 the [http://www.eastkyexpo.com/] opened in downtown Pikeville. The center, which seats 7,000, features numerous events including world renowned concerts and shows. The city is also home to the Pikeville Concert Association which secures renowned cultural events for the area. These events usually take place at Booth Auditorium on the campus of Pikeville College.

The is Pikeville's minor league basketball franchise of the CBA. The Miners will open the 2008 season in the Eastern Kentucky Exposition Center.

Also, in the month of April is one of the state's largest festivals: Hillbilly Days. The festival embraces the areas culture and past through, company, music and costume. The proceeds from the festival go to the Shriner's hospital. [http://www.hillbillydays.com/]