The Way of the Gun

The Way of the Gun

Infobox Film
name = The Way of the Gun 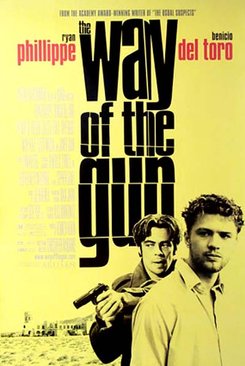 Parker () and Longbaugh () are two born troublemakers who travel anywhere they can to find money any way they can. While at a sperm donation facility, they overhear a telephone conversation detailing a young woman's $1,000,000 payment to be a surrogate mother for the unborn baby of Hal Chidduck (). The two plan to kidnap the girl Robin (). At the hospital the kidnapping escalates into a standoff with her two bodyguards, Jeffers () and Obecks (), and Parker and Longbaugh leave. After a shootout outside in which two other guards and bystanders were killed, they manage to kidnap Robin and elude Jeffers and Obecks, leading to their arrest. The two are bailed out and returned to Chidduck by Joe Sarno (), a seasoned operative and close friend of Chidduck. As Sarno begins coordinating the safe rescue of Robin, Longbaugh contacts Robin's gynecologist, Dr. Allen Painter () and orders him to a truck stop to examine Robin.

After the examination, Painter returns to Chidduck, his employer and father, before Longbaugh calls and demands a $15 million ransom for Robin's safe return. Jeffers and Obecks, tempted by the money, begin forming a plan to save the child, keep the $15 million for themselves, and kill everyone under the guise of paying off the kidnappers. As Longbaugh hangs up the telephone outside a Mexican motel, he is approached by Sarno, who offers to pay $1 million if they surrender the pregnant Robin and simply walk away. Longbaugh declines the offer and returns to his hotel room where Parker and Robin play cards.

Jeffers, Obecks and Painter leave to meet with the kidnappers, while Sarno departs separately with the $15 million ransom. At the motel, Parker is having second thoughts on the kidnapping, during which Longbaugh sees Robin moving through the window, and almost gets Parker killed when he offers to get his jacket. Longbaugh saves him from a shotgun blast from Robin at the last minute. As sirens approach in the distance, Parker and Longbaugh hastily escape, and Robin emerges into the parking lot just as Mexican police officers arrive, followed by Jeffers, Obecks and Painter. As Painter and the bodyguards try to persuade Robin to leave with them, the officers pull their guns and order everybody on the ground. Suddenly, Parker and Longbaugh open fire from a distant hill, igniting a fierce firefight that kills the two officers before Jeffers shoves Painter and Robin into his car and drives off, leaving the dead officers and a wounded Obecks in the motel parking lot.

Parker and Longbaugh torture the wounded Obecks for Robin's location, while Jeffers confines Robin in the room of a secluded Mexican brothel and forces Painter to perform a on her to retrieve the baby, despite Robin's confession that the child was conceived between her and Painter and is not Chidduck's. During the operation, the heavily-armed Parker and Longbaugh infiltrate the brothel and search for Robin. The ensuing ambush, that leaves Parker wounded, turns into another standoff with Jeffers threatening to kill Painter and the baby before Painter kills Jeffers with a hidden gun. Mean while outside the brothel, Sarno arrives with a group of bag men and the $15 million ransom, which they stack in the courtyard. Parker wants to kidnap Robin and Painter again, to which Longbaugh, guilt ridden after seeing her condition, says "She's had enough". Despite realizing that the $15 million is bait, Parker and Longbaugh charge headlong into an ambush. After killing all of Sarno's men, Sarno himself shoots and cripples the already wounded Parker and Longbaugh before calling for an ambulance. As a child's cries break the silence, Robin emerges with Painter, newborn baby in her arms, and transported via ambulance with Painter, Sarno and the $15 million away from the dying Parker and Longbaugh.

McQuarrie met Benicio del Toro for coffee and he asked the screenwriter why he hadn't made another crime film. McQuarrie replied that he didn't want to be typecast as "a crime guy" but realized that he had nothing to lose, "unemployed and ready to make trouble." Del Toro convinced him to write a crime film on his own terms because he would get the least amount of interference from a studio. McQuarrie was interested in making a movie "that you can follow characters who don't go out of their way to ingratiate themselves to you, who aren't traditionally sympathetic."

McQuarrie started to write the script and "the first thing I did was to write a list of every taboo, everything I knew a cowardly executive would refuse to accept from a 'sympathetic' leading man." The first ten pages were a prologue, a trailer to another movie with Parker and Longbaugh (the real last names of and the ) and was "to be shot as slick and hip as possible. and but with horrible, unspeakable acts of violence and degradation." During pre-production, McQuarrie realized that this was too extreme and cut it out. He and del Toro gave the script to several high-profile actors at the time all of whom turned them down. Ryan Phillippe wanted to change the direction of his career and "was besieged with choice offers, and we didn't want him, but he would not take no for an answer."

Although he originally had a considerable amount of dialogue in the film, del Toro suggested that the "less is more" approach might work better for his character Longbaugh. The gun battle sequences throughout the film were choreographed by McQuarrie's brother, a former . Much of the film was filmed in the streets of downtown . The ground-level floor of the doctor's office where the abduction scene and shootout was filmed is actually the historic .

In his review for the "", Elvis Mitchell wrote, "It's a song you've heard before, but each chord is hit with extraordinary concentration." [cite news
last = Mitchell
first = Elvis
coauthors =
title = A Noir Story of Guns Always at the Ready
work =
pages =
language =
publisher =
date = ,
url =
accessdate = ] Andy Seiler praised James Caan's performance in his review for "", "To hear Caan menacingly intone 'I can promise you a day of reckoning you will not live long enough to never forget' is to remember why this man is a star." [cite news
last = Seiler
first = Andy
coauthors =
title = Weaving this "Way" and that for thrills
work =
pages =
language =
publisher =
date = ,
url =
accessdate = ]