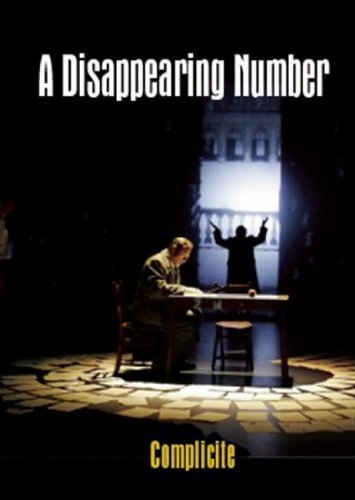 "A Disappearing Number" is a 2007 play by English playwright , inspired by the collaboration during the 1910s between two of the most remarkable pure mathematicians of the twentieth century, , a poor Brahmin from South India, and Cambridge .

It was a co-production between UK-based theatre company , Ruhrfestspiele, Wiener Festwochen, Holland Festival and Theatre Royal Plymouth. "A Disappearing Number" premiered in Plymouth, toured the internationally, and played at the in Autumn 2007. It was directed by with music by . The production is 110 minutes with no intermission.

Ramanujan first attracted Hardy’s attention by proving that the sum of 1 + 2 + 3 + ... would equal minus one-twelfth. Hardy realised that this confusing presentation was an application of the with s = -1. [Marcus du Sautoy, ""]

The play includes live tabla playing which “morphs seductively into pure mathematics”, as the "" review put it, “especially when … its rhythms shade into chants of number sequences reminiscent of the libretto to Philip Glass’s "Einstein On The Beach". One can hear the beauty of the sequences without grasping the rules that govern them.”

The play had two strands of narrative. The show interwove the passionate intellectual relationship between Hardy and the more intuitive Ramanujan, with the present-day story of a man (intitially played by McBurney) and his maths lecturer partner. She travels to India in Ramanujan’s footsteps and eventually dies. He follows, to get closer to her ghost. Meanwhile, 100 years previously, Ramanujan is travelling in the opposite direction, making the trip to England that eventually kills him. Partition (as a maths concept) is paralleled appositely with the and Pakistan, and diverging and converging series in mathematics become a metaphor for the Indian diaspora.