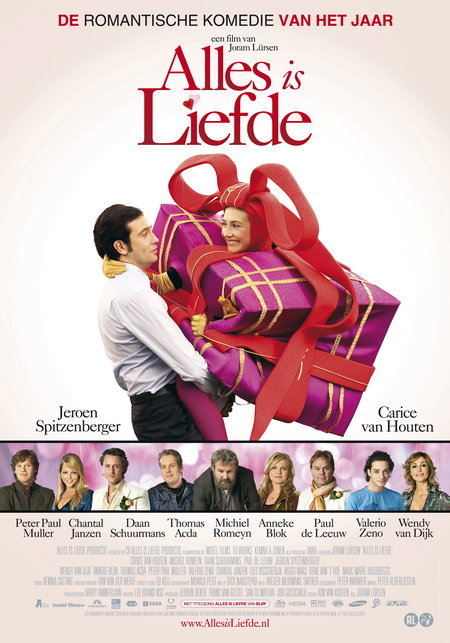 "Alles is Liefde" (English translation: "everything is love") is a romantic comedy , directed by , starring , , , and .

Klaasje () has left her husband Dennis (), because he cheated on her with a young and attractive elementary school teacher (). Dennis wants her back, but his chances seem to be reduced to nothing when she has a fling with a 16-year-old boy (). Meanwhile, Klaasje's best friend Simone () is the boss at home. Her husband Ted () has just lost his job, but he is afraid to tell his dominant wife about this.

The movie also follows swimming instructor Victor (), who is about to get married to the (male) love of his life, Kees (). However, during the wedding ceremony the younger Kees calls it off, afraid to get settled. Meanwhile, Victors sister Kiki (), an employee at the , is dreaming of her very own prince charming. She becomes romantically involved with a real prince, Valentijn ().

With the arrival of a mysterious (), all of the couples finally know what to do with their lives. [ [http://nl.wikipedia.org/wiki/Alles_is_Liefde Plot Outline] "Dutch Wikipedia" (translation)]

In 2007, it was the most viewed Dutch film in cinemas, and over all the third most viewed film in Dutch cinemas, coming after "" and "".