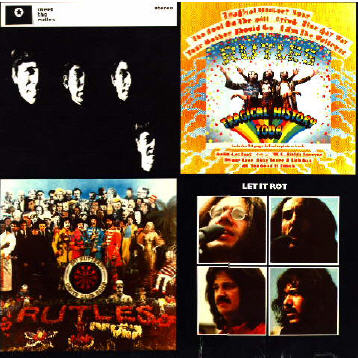 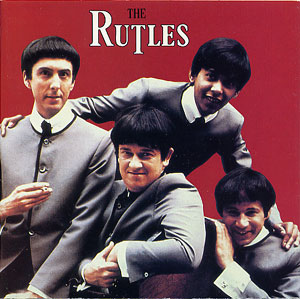 Lower caption = The cover to the CD reissue of 'The Rutles'.

"The Rutles" is a album to the 1978 "". The album contains over 14 of the tongue-in-cheek, pastiches of ' songs that featured in the film.

Multiple listenings are required to discern all the sources referenced in titles, lyrics, melodies, and song structures. The primary creative force of the Rutles music was , the sole composer and arranger of the songs. Innes had been the 'seventh' member of , as well as one of the main artists behind the in the late 1960s, who had been featured in the real Beatles' "" performing "Death Cab For Cutie".

Innes himself credits the three musicians he recruited to assist him on the project as having been enormously important in helping him capture the feel of the Beatles. Guitarist/singer and drummer John Halsey had played together in the groups Timebox and Patto. Multi-instrumentalist Rikki Fataar had played with before joining the in the early 1970s.

Not commonly known is that Eric Idle is not heard at all on the music soundtrack of the film. He did not play or sing on any of the recordings. He is skillful at lip-syncing the 'Dirk' vocals that were in fact sung by . Innes says that Idle, who had recently had an appendectomy, offered to help but was encouraged to recuperate. Were it not for the inherently ironic lyrics, it might be difficult to distinguish the songs from true Beatles numbers (indeed, the 1978 Beatles bootleg "Indian Rope Trick" included The Rutles' "Cheese and Onions", incorrectly — and perhaps jokingly — attributing it to John Lennon). In the early 1980s, Innes was accused by one American Beatle fan of stealing unreleased Beatles tracks to use in the film; this was based on a recording of "Cheese And Onions" obtained by the fan which he believed to be by John Lennon. When the recording was played to Innes, he was amused to discover that it was actually his own demo of the song - a tribute to his skills as a parodist.

The songs written by Innes so cleverly parodied the original source material that he was taken to court by the owners of The Beatles catalogue. Innes had to testify under oath that he had not listened to the songs at all while composing The Rutles songs, but had created them completely originally based on what he remembered various Beatles songs sounding like at different times.

The cover art of the album suggested the existence of a number of other Rutles albums including "Tragical History Tour" and "Let It Rot".

The album contains some obvious send-ups of Beatles numbers such as "Ouch!" ("Help!"), "Love Life" ("All You Need is Love"), "Piggy in the Middle" ("I Am the Walrus"), "Doubleback Alley" ("Penny Lane") and "Get Up And Go" (CD reissue only -- "Get Back"). However, its real tribute is in its subtly layered blending of elements from many classic Lennon-McCartney tunes.

The original LP album omitted several songs which were restored on the 1990 CD reissue.

The above songs were all actually written by Neil Innes. The songwriter attributions above are the 'fictional' writing credits listed as they would have been in the 'Rutles universe.' Reflecting the balance of songwriting credits on most Beatles albums, the vast majority of the songs are credited to Ron Nasty and Dirk McQuickly (the 'John and Paul' of The Rutles), with one composition each credited to the rivals for 'George' (Stig O'Hara) and 'Ringo' (Barry Wom)

The only song from the film that did not end up on the soundtrack is "You Need Feet." It was not included because it was not actually a Rutles piece, but an existing song written & performed by .

* "The Canadian version, on casette, is the only version of this release to actually be titled, "Meet The Rutles"

* Contains the original 14 tracks + "Goose Step Mama", "Baby Let Me Be", "Blue Suede Schubert", "Between Us", "It's Looking Good" and "Get Up & Go"
* Airplane sound effects and count in missing from "Hold My Hand"
* Insert folds out into "Rutlemania" memorabilia mini-poster.
* First appearance of catalogue numbers for each track.
* First mention of "The Silver Rutles Demos" & "Rutle Soul" albums.
* C.D. label designed to look like Capitol Records Yellow & Orange Swirl 45 RPM Label

* Same material as U.S. C.D. (including edited "Hold My Hand" as noted above.)
* Digi-pack designed to open as a gatefold album with alternate front cover.
* Booklet contains most of the original Rutles booklet. (Paul Simon interview is missing.)
* C.D. in Mini-Sleeve that duplicates the "other artistes on the Rutle label" album sleeve.
* Does not include song lyrics.