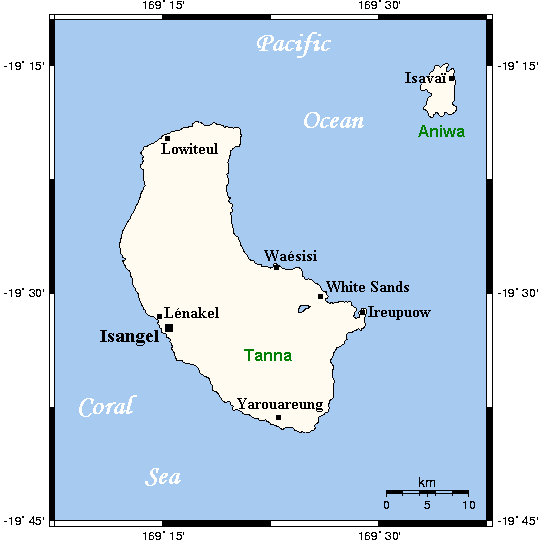 image caption =Tanna and the nearby island of Aniwa
locator

Tanna is populated almost entirely by Melanesians and they follow a more traditional lifestyle than many other islands. Some of the villages are known as villages, where modern inventions are restricted, the inhabitants wear s (: "nambas") and grass skirts, and the children do not go to public schools. According to anthropologist , who has studied the Tannese extensively, their resistance to change is due to their traditional worldview and how they "perceive, internalise, and account for the dual concepts of space and time." [Lissant Bolton. [http://www.findarticles.com/p/articles/mi_qa3654/is_199612/ai_n8744490 Tree and the Canoe: History and ethnogeography of Tanna] , "The Oceania", Dec 1996]

There are five languages spoken on Tanna: North Tanna in the northwest, Lénakel in the west-central area near Lénakel, Southwest Tanna in the southwest, Whitesands in the northeast near , and Kwamera in the southeast. These are generally grouped into the family, which is a subgroup of the , an Austronesian language branch. According to "", each is spoken by a few thousand, and Lénakel, with 6,500 speakers, is one of the languages of Vanuatu with the most speakers. Most people on Tanna also speak , which is one of Vanuatu's three official languages (together with English and French).

The island is one of the most fertile in Vanuatu and produces , , , , and other fruits and vegetables. Recently, has become more important, as tourists are attracted to the volcano and traditional culture. To help preserve the integrity of culture as a tourism asset, only local people are permitted to act as guides. There are many accommodations available on the island. There is an airport at on the western coast.

The island was first settled about 400 BC by Melanesians from the surrounding islands. The glowing light of Mount Yasur attracted , the first an, to the island in August 1774, where he founded , a town on the eastern tip of the island, named after his ship HMS "Resolution". He gave the island the name of Tanna, probably from the local name for earth, "tana" in the Kwamera language. In the 19th century, traders and missionaries (chiefly Presbyterian) arrived, but the Tannese stuck to their traditions more strongly than other islands; there remain fewer Christians in comparison with the other islands of Vanuatu. The island became famous in Europe as a place of and risk for missionaries. [ [http://www.wholesomewords.org/biography/biorppaton.html Biography of John Gibson Paton] at Christian Biography Resources] It was not a principal site of , but about 1,000 people from Tanna were recruited to work on the American military base on . First exposure to living standards may have led to the development of s. Many have died out, but the cult remains strong on Tanna today, especially at Sulphur Bay in the south east and Green Point in the South West of the Island.

A secessionist movement began in the 1970s, and the Nation of Tanna was proclaimed on , . While the British were more open to allowing its holdings in Vanuatu independence, it was opposed by the French colonists and finally suppressed by the authorities on , . In 1980, there was another attempt to secede, declaring the Tafea Nation on , , its name coming from the initials of the five islands that were to be part of the nation (Tanna, Aniwa, Futuna, Erromango and Aneityum). British forces intervened on , allowing the island to become part of the newly independent nation of Vanuatu on , .

In 2007, five native ambassadors for the island of Tanna (Yapa Nekiwris, Posen Iarpita Napu, Albi Nagia, Jimmy Joseph Nakou and Joel Numapen) took part in a Channel 4 documentary named "Meet the Natives" where the ambassadors lived with the three native "tribes" of England: the working class; the middle class and the upper class. The five ambassadors took part in many local activities from fox-hunting to playing darts in a traditional pub. It many times in the programme the five compare life in England to life in Tanna, often loaded with home truths.