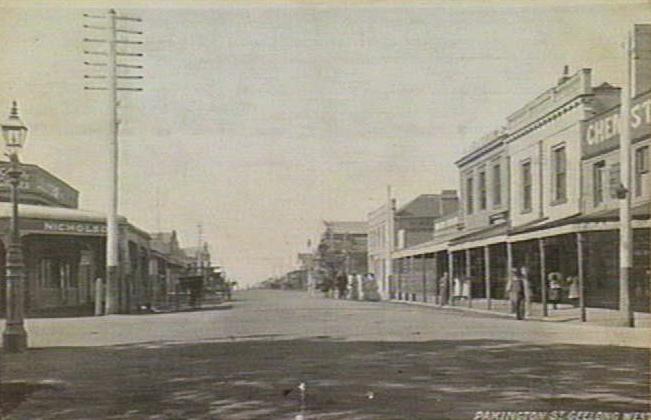 Geelong West is a commercial and residential suburb of Geelong, Victoria, . When Geelong was founded, the area was known as Kildare but its name was changed to Geelong West in 1875. The main street is Pakington Street.

Ashby was once a suburb of Geelong located in the area of Geelong West, west of Latrobe Terrace, between Aberdeen Street and Church Street. By 1850 this area had become known as Little Scotland, and Kildare. At this point, Ashby referred to the area between Autumn Street and Waratah Street.

In 1875 the entire Ashby area was renamed West Geelong. The Ashby state school, which had only opened that same year, changed its name to Geelong West. In 1988, as part of Australia's bicentennial celebrations, the school changed its name back to Ashby. A Post Office named Geelong West opened on 1 July 1865 but was replaced and renamed Geelong North Railway Station in 1886. On 1 April 1887 the Geelong West office reopened near its present location.

Geelong West was served by an electric tramway service from 1912 until 1956, [cite web|url=http://www.tmsv.org.au/papers/geelong.htm|title=Geelong tramways - a short history|accessdate=2007-06-13] when the service was replaced by buses subcontracted out to (currently owned by ).

Journalist and publisher was born in Geelong West in 1856. A memorial bust was erected on the corner of Weddell Rd and Shannon Ave in 1956.

The Pako Festa is an annual festival held in Pakington Street, Geelong West each year around late February. In 2006 it was held on the 25th of February. The festival is held to promote and show appreciation for the artwork and fashion designed by citizens of the Geelong area.

The suburb has an football team competing in the