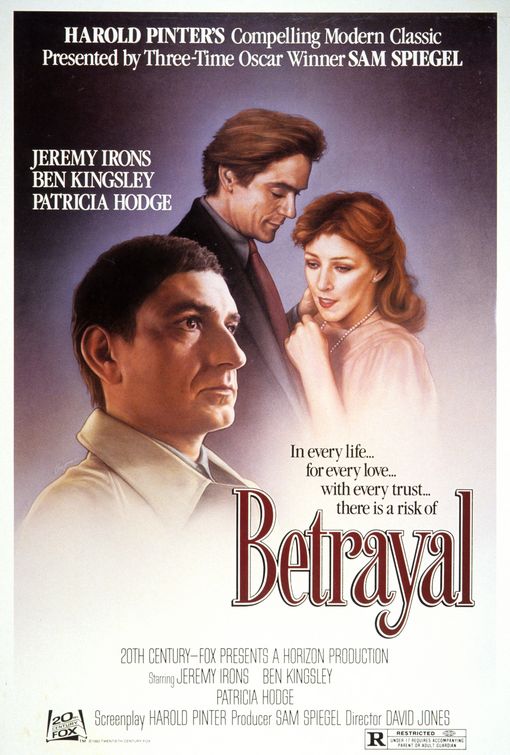 "Betrayal" is 's film adaptation of his semi-autobiographical 1978 play "Betrayal". The 1983 film was produced by Sam Spiegel and directed by David Jones. Pinter based the drama on an affair he had in 1962-69 with television presenter , who was married to the producer-director .

The storyline follows significant moments in the seven-year extramarital affair of art gallery owner Emma () with literary agent Jerry (), the best friend of her husband Robert (), a London publisher. With titles such as "Two years earlier" and "Three years earlier," nine sequences are shown in reverse chronological order with Emma and Jerry meeting for the first time at the conclusion of the film.

The film received rave reviews from and other critics. wrote::The absolutely brilliant thing about "Betrayal" is that it is a love story told backward. There is a lot in this movie that is wonderful -- the performances, the screenplay by Harold Pinter -- but what makes it all work is the structure... The "Betrayal" structure strips away all artifice. It shows, heartlessly, that the very capacity for love itself is sometimes based on betraying not only other loved ones, but even ourselves. The movie is told mostly in encounters between two of the characters; all three are not often on screen together, and we never meet Jerry's wife. These people are smart and verbal and they talk a lot -- too much, maybe, because there is a peculiarly British reserve about them that sometimes prevents them from quite saying what they mean. They lie and they half-lie. There are universes left unspoken in their unfinished sentences. They are all a little embarrassed that the messy urges of sex are pumping away down there beneath their civilized deceptions. The performances are perfectly matched. Ben Kingsley (of "Gandhi") plays Robert, the publisher, with such painfully controlled fury that there are times when he actually is frightening. Jeremy Irons, as Jerry, creates a man whose desires are stronger than his convictions, even though he spends a lot of time talking about his convictions and almost none acknowledging his desires. Patricia Hodge, as Emma, loves them both and hates them both and would have led a much happier life if they had not been her two choices. But how can you know that when, in life, you're required by the rules to start at the beginning? [ [http://rogerebert.suntimes.com/apps/pbcs.dll/article?AID=/19830318/REVIEWS/303180301/1023 Ebert, Roger. "Chicago Sun-Times", March 18, 1983.] ]

Distributed by International Classics (USA), it was first screened in movie theaters in New York in February 1983. [Susan Hollis Merritt, "Pinter in Play: Critical Strategies and the Plays of Harold Pinter" (1990; Durham and London: Duke UP, 1995) 236, 300. The first film reviews of such New York commercial screenings cited by Merritt date from 20 February 1983 (236-39).]

The "" episode "The Betrayal", telecast , was inspired by this movie. All of the events in the episode occur backwards with the end at the beginning and vice versa.