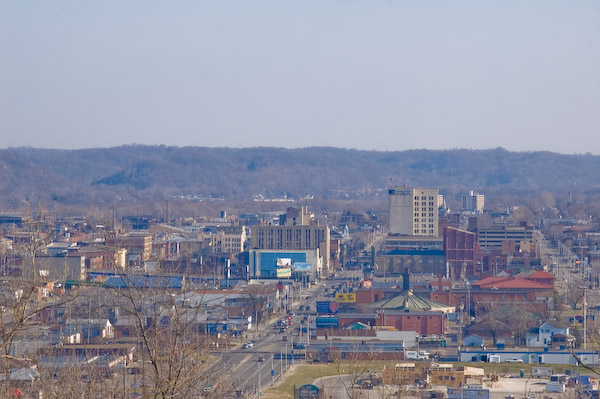 Ashland is a city in Boyd County, , , nestled along the banks of the . The population was 21,981 at the 2000 census. Ashland is a part of the (MSA). As of the 2000 census, the MSA had a population of 288,649. Ashland is the second largest city within the MSA, after Huntington. Ashland serves as an important economic and medical center for northeast Kentucky.

Ashland dates back to the migration of the Poage family from the via the famed in 1786. They settled upon a homestead along the and named it Poage's Landing. It remained an extended-family settlement until the mid-1800s.

The city's early industrial growth was a result of Ohio's industry. It was not until 1854, that growth began to occur with the charter of the Kentucky Iron, Coal and Manufacturing Company by the Kentucky General Assembly. Major industrial employers in the first half of the 20th century included the Armco, the Ashland Oil and Refining Company, the C&O Railroad, Allied Chemical and Dye Company's Semet Solvay and Mansbach Steel.

Ashland distinctly experiences all four seasons, with vivid fall foliage and occasional snow in winter. Average highs are around 88°F in July, the warmest month, and average lows are around 19°F in January, the coolest month. The highest recorded temperature was 105°F in July 1954. The lowest recorded temperature was -25°F in January 1994. Average annual precipitation is 42.8 inches, with the wettest month being July, averaging 4.7 inches.

There were 9,675 households out of which 26.8% had children under the age of 18 living with them, 47.4% were married couples living together, 13.5% had a female householder with no husband present, and 36.0% were non-families. 33.1% of all households were made up of individuals and 16.0% had someone living alone who was 65 years of age or older. The average household size was 2.23 and the average family size was 2.82.

Ashland is governed by a City Commission and Manager form of government and is best described as a devolved government.

The mayor of Ashland is elected for a four year term and is not term limited. The mayor presides over City Commission meetings, is a voting member of the City Commission and represents the city at major functions. Currently, the office of mayor is vacent due to the resignation of Steve Gilmore. Gilmore resigned to become the superintendent of the . The City Commission has named former Ashland police officer and long time city commissioner Kevin Gunderson Presiding Commissioner until December 31, 2008. As Presiding Commissioner, Gunderson's duties will include those of acting mayor. In addition, the commission appointed former Ashland firefighter Tom Cantrell to the seat on the commission vacated by Gilmore. [http://www.dailyindependent.com/archivesearch/local_story_220234033.html]

Two candidates — current Ashland Commissioner Paula Hogsten and former Ashland Police Chief Tom Kelley — are on the ballot for the November 2008 general election for mayor of Ashland. Chris Hammond is also running as a write-in candidate. Because of this, his name will not appear on the ballot.

In the late-1800s, what is now the Ashland Police Department was organized during the town's reign as Poage's Landing. The first executive officer was a town and was soon eclipsed by a professional police department.

The city of Ashland currently has 49 sworn officers, three civilian employees that function as administrative support and six parapolice that handle tasks that do not require the services of a sworn officer.

Formed from the merger between Armco and Kawasaki.

The fourth largest hospital in the state of , the 385-bed not-for-profit institution is the city's largest employer at over 3,702 employees.

Another hospital, the Ashland Tuberculosis Hospital, was located south of the city and opened in 1950.

Ashland's central business district extends from 12th Street to 18th Street, and from Carter Avenue to Greenup Avenue. It includes many notable buildings, such as the and the Ashland Bank Building.

One public high school serves the city of Ashland; , named after philanthropist and founder of , Paul G. Blazer. The high school is home to the Ashland Tomcats and Kittens athletic teams. The school's marching band competes in the AAAA class of the [http://www.kmea.org/ Kentucky Music Educators Association] (KMEA). The marching band is commonly called "The Pride of Blazer" for it's excellent performance in many KMEA marching band competitions.

The two private schools serving the Ashland area are the [http://holyfamilyschool.cdlex.org/ Holy Family School] and the [http://www.rosehillashland.com/page.asp?name=rhcs Rose Hill Christian School] . Holy Family is affiliated with Holy Family Catholic Church and currently offers K-8 education. Rose Hill is affiliated with the Rose Hill Baptist Church and offers K-12. Post-secondary educational opportunities include which has multiple campuses within the city. also has a satellite campus located in Ashland.

The , an art-deco converted movie theater built in 1930, is located on Winchester Avenue. The theater serves as an important venue for the arts in eastern Kentucky and the surrounding states of and . It is well noted for its Festival of Trees event during the winter season. In addition, the Paramount was the setting where Billy Ray Cyrus' "Achy Breaky Heart" was taped.

Also along Winchester Avenue is the [http://www.highlandsmuseum.com/ Highlands Museum and Discovery Center] . Among its numerous exhibits, includes one about Country Music Heritage that pays tribute to the local music artists that line in Kentucky. Two local artists, from Ashland, and from nearby Flatwoods, are included.

The [http://www.pendletonartcenter.com/ashland_ky.html Pendleton Art Center] is also located within the downtown, formed in 2005. Among the art produced there include paintings, stained glass, carved gourds, and wood carvings produced by local artists. They are presented at the Pendleton the first Friday and Saturday of every month and other times by appointment.

[http://www.jsfbooks.com The Jesse Stuart Foundation] , an organization dedicated to the preservation of the literary legacy of and other writers, is located within an earshot of the Pendleton Arts Center. Jesse Stuart, a well-known 20th century author, was from nearby .

Ashland is home to "The Independent", a seven-day morning that covers the city and the surrounding metropolitan area. The newspaper is often called "The Daily Independent" by locals, as this was its former name. One of the paper's claims to fame is the first printing of a supposed image of Jesus in the clouds of Korea in 1951. [ [http://www.snopes.com/photos/natural/jesusclouds.asp] ]

Ashland residents receive their network television primarily from stations in Huntington and . In addition, , the affiliate in is shown on cable in Ashland when its programming is different from the CBS affiliate in Huntington, . There are also two television stations licensed to Ashland itself. Those are:

Ashland boasts a 47-acre wooded Central Park, founded in 1854, playgrounds and other amusements. It was bounded between Lexington and Central Avenue, and 17th and 22nd Streets. In 1936, the constructed a central road through the park; one year later, a pond was constructed in the southeast quadrant. Twenty years later, after complaints of mosquito problems, the pond was filled in with five feet of dirt and it became a softball practice field.

In the spring of 1995, the pond was excavated and was filled with water by September. The original water lilies that were planned in 1937 had come back in full bloom. A fountain was added in the center and numerous fish species were added. The park today features three separate children playgrounds, several baseball diamonds, a volleyball court and a traditional bandstand. Central Park also hosts an annual holiday light show, the Winter Wonderland of Lights.

In July 1976, a new 10-acre park at the former Clyffeside Park was envisioned. Named after Commissioner Johnny Oliverio, it features several baseball diamonds, and is located along Winchester Avenue near 39th Street.

Located just north of the city in Worthington is the . This airport is used for general aviation and charter services. The then-named "Ashland-Boyd County Airport" opened in 1953 and featured a 5,600 ft. runway with a 3,000 ft. clearance.

, located in nearby , provides commercial aviation services for the city.

, the national passenger rail system, provides service to Ashland. The major and only line that Amtrak offers in Ashland is the Cardinal. Amtrak Service is offered at the Ashland Transportation Center, formerly the Chesapeake and Ohio freight depot located at 15th Street near the , but it does not have an Amtrak Ticket Counter or QuikTrak Ticket Machine. The former freight depot, constructed in 1906 on the former Aldine Hotel site, [Chappell, Edward A. "A historic preservation plan for Ashland, Kentucky." City of Ashland, Apr. 1978. 2 Jan. 2006.] was an abandoned derelict before being renovated in the late 1990s to serve as a unified transportation hub for the city.

The former passenger depot at 11th Street and Carter Avenue, was completed in 1925 but abandoned in the 1970s in favor of a downsized depot in Catlettsburg. The rail lines to the building have since been removed and the building itself now serves as the downtown Ashland branch of . Passenger rail service was moved from Catlettsburg to the Ashland Transportation Center in the early 2000s.

is the sole provider of bus transportation out of Ashland. It operates out of the Ashland Transportation Center.

Ashland is served by US 23 and US 60, several state routes, and is in close proximity to US 52 and .

*, film director.
*, born in Ashland. A participant in the scandal.
*, a former Governor and Senator from .
* is a and a diva who performs for .
*, a duo of mother Naomi and daughter Wynonna. The city of Ashland features a public square at 16th Street and Winchester Avenue titled "Judd Plaza".
* is an and daughter of Naomi Judd.
*Although originally from , is an actor and former Kentucky gubernatorial candidate. He currently resides in Ashland.
*Kathleen Maddox, mother of .
*Michele Mahone, television host of .
* was the first red-haired in .
* an umpire in Major League Baseball.
*, country music singer.
*Colonel Scott, biological father of .
*, also known as Bobby Blaze, is a for national and international wrestling organizations including and .
*, proprietress of the American Folk Song Festival in the Ashland area between 1930 and 1972.
* is a for 's , 2006 National League winner.
* is popular . A street in Central Park, "Chuck Woolery Boulevard", is named after him.

*In 1925, a new city hall was erected at the corner of 17th Street and Greenup Avenue.
*The government switched from a councilmanic to a city commissioner-manager form of government in 1950.